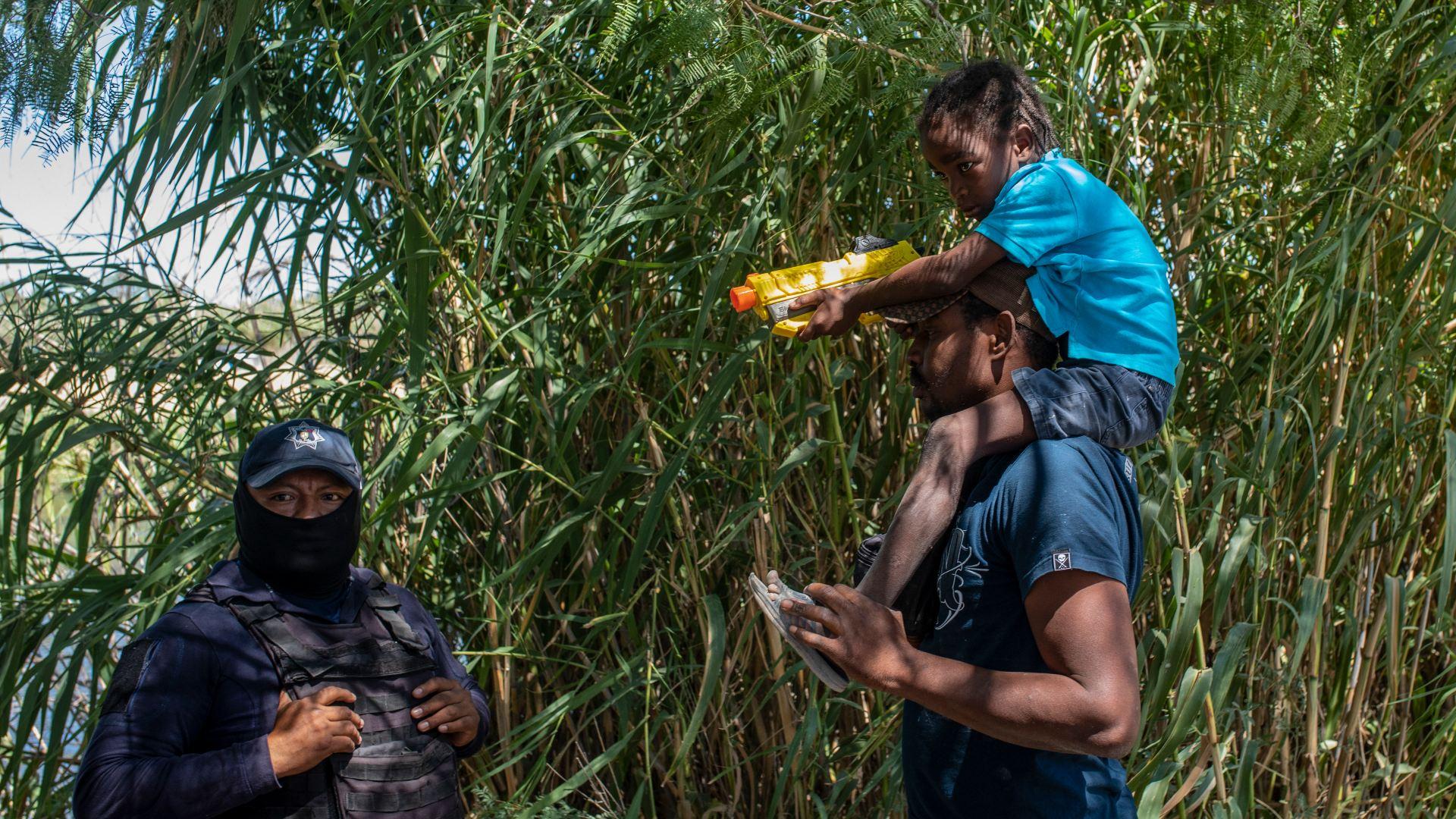 A Haitian migrant talks to with a Mexican police officer blocking access to the Rio Grande river so that immigrants can't use it to cross the U.S.-Mexico border from Ciudad Acuna, Mexico, Thursday, Sept. 23, 2021. (AP Photo / Felix Marquez)

County Judge Lewis Owens told The Associated Press in a text message that he’s been told all of the migrants will be removed by the end of the day — a dramatic change from Saturday, when the number peaked as migrants driven by confusion over the Biden administration’s policies and misinformation on social media converged at the border crossing between Del Rio, Texas, and Ciudad Acuña, Mexico.

Many face expulsion because they are not covered by protections recently extended by the Biden administration to the more than 100,000 Haitian migrants already in the U.S. — many of whom left their homeland after its devastating 2010 earthquake — citing security concerns and social unrest in the Western Hemisphere’s poorest country.

The United States and Mexico appeared eager to end the increasingly politicized humanitarian situation at the border that prompted the resignation of the U.S. special envoy to Haiti and condemnation from civil rights leader Rev. Al Sharpton and UNICEF after images spread widely this week of border agents maneuvering their horses to forcibly block and move migrants.

President Joe Biden on Friday said it was “horrible” to see the way agents used horses block people from crossing the Rio Grande and he promised that “people will pay” as a result.

The incident prompted widespread outrage and is under investigation. The agents have been assigned to administrative duties and the Department of Homeland Security said it has suspended the use of horses in Del Rio.

“It was horrible, what you saw to see them treat people like they did,” Biden told reporters. “Those people will pay, there’s an investigation underway now and there will be consequences. ... It’s an embarrassment, but it’s beyond an embarrassment — it’s dangerous, it’s wrong, it sends the wrong message around the world and sends the wrong message at home. It’s simply not who we are.”

Homeland Security has said that nearly 2,000 Haitians had been rapidly expelled on flights since Sunday under pandemic powers that deny people the chance to seek asylum. About 3,900 were being processed for a possible return to Haiti or placement in U.S. immigration court proceedings. Others have been released in the U.S. with notices to appear in court or to report to immigration authorities. Thousands have returned to Mexico.

A U.S. official said Thursday that authorities expected the camp to be empty in about two days. The official had direct knowledge but was not authorized to speak publicly. Homeland Security had planned to ramp up to seven daily flights but flew only three Wednesday and five Thursday because of issues with contractors and mechanical delays, the official said. Seven flights were scheduled to Haiti on Friday, six on Saturday and seven on Sunday.

Across a river, Haitians who camped in Mexico awoke Thursday surrounded by security forces, with a helicopter thundering overhead and state police trucks spaced every 30 feet or so between their tents and the edge of the Rio Grande.

After anxious minutes of indecision, dozens of families hurried into the river to cross where there was only one municipal police vehicle, calculating it was better to take their chances with U.S. authorities.

“Things are going badly,” said Michou Petion, carrying her 2-year-old son toward the river. Her husband carried bags of belongings and several pairs of sneakers dangled around his neck.

“The U.S. is deporting a lot to Haiti, now I don’t know if I can enter or leave,” Petion said.

Sharpton said Thursday that he toured the camp and witnessed “a real catastrophic and human disgrace.” A handful of protesters, some wearing camouflage hats from former President Donald Trump’s 2020 campaign, shouted through Sharpton’s remarks.

Sharpton vowed to “continue to come back ... and stand with our people and make sure asylum is treated in one way and one manner.”

Some Haitians are being allowed to remain in the U.S. at least temporarily to seek asylum or to stay under some other claim to residency, with notices to appear later before immigration authorities. DHS officials declined to specify the number but said they are people with particular “vulnerabilities,” meaning they are pregnant, have young children or the U.S. doesn’t have the capacity to hold them in detention, especially during the pandemic.

The government has no plans to stop expelling others on public health grounds despite pressure from Democratic lawmakers, who say migrants are being sent back to a troubled country that some left more than a decade ago.

The Trump administration enacted the policy in March 2020 to justify restrictive immigration policies in an effort to prevent the spread of the coronavirus. The Biden administration has used it to justify the deportation of Haitian migrants.

A federal judge late last week ruled that the rule was improper and gave the government two weeks to halt it, but the Biden administration appealed.

Officials said the U.S. State Department is in talks with Brazil and Chile to allow some Haitians who previously resided there to return, but it’s complicated because some of them no longer have legal status there.

Foote, who was appointed in July, wrote to Secretary of State Antony Blinken, saying he was stepping down immediately “with deep disappointment and apologies to those seeking crucial changes.”

“I will not be associated with the United States inhumane, counterproductive decision to deport thousands of Haitian refugees and illegal immigrants to Haiti, a country where American officials are confined to secure compounds because of the danger posed by armed gangs to daily life,” he wrote. “Our policy approach to Haiti remains deeply flawed, and my policy recommendations have been ignored and dismissed, when not edited to project a narrative different from my own.”

The career diplomat was known to be deeply frustrated with what he considered a lack of urgency in Washington and a glacial pace on efforts to improve conditions in Haiti.

“Some of those proposals were determined to be harmful to our commitment to the promotion of democracy in Haiti and were rejected during the policy process. For him to say his proposals were ignored is simply false,” Price said.

UNICEF said initial estimates show more than two out of three migrants expelled to Haiti are women and children, including newborns.

“Haiti is reeling from the triple tragedy of natural disasters, gang violence and the COVID-19 pandemic,” said Henrietta Fore, UNICEF’s executive director, who said those sent back without adequate protection “find themselves even more vulnerable to violence, poverty and displacement — factors that drove them to migrate in the first place.”

U.S. officials said about two-thirds of those at the camp are families and the rest are single adults.

But even as the number of Haitian migrants in Del Rio dwindled, a few groups of Cubans walked along a dirt road toward the camp Thursday.

As a group of three men approached, a Texas officer yelled out, “We got migrants!” One of the men said in Spanish: “We’re here. We made it to the country of liberty.”