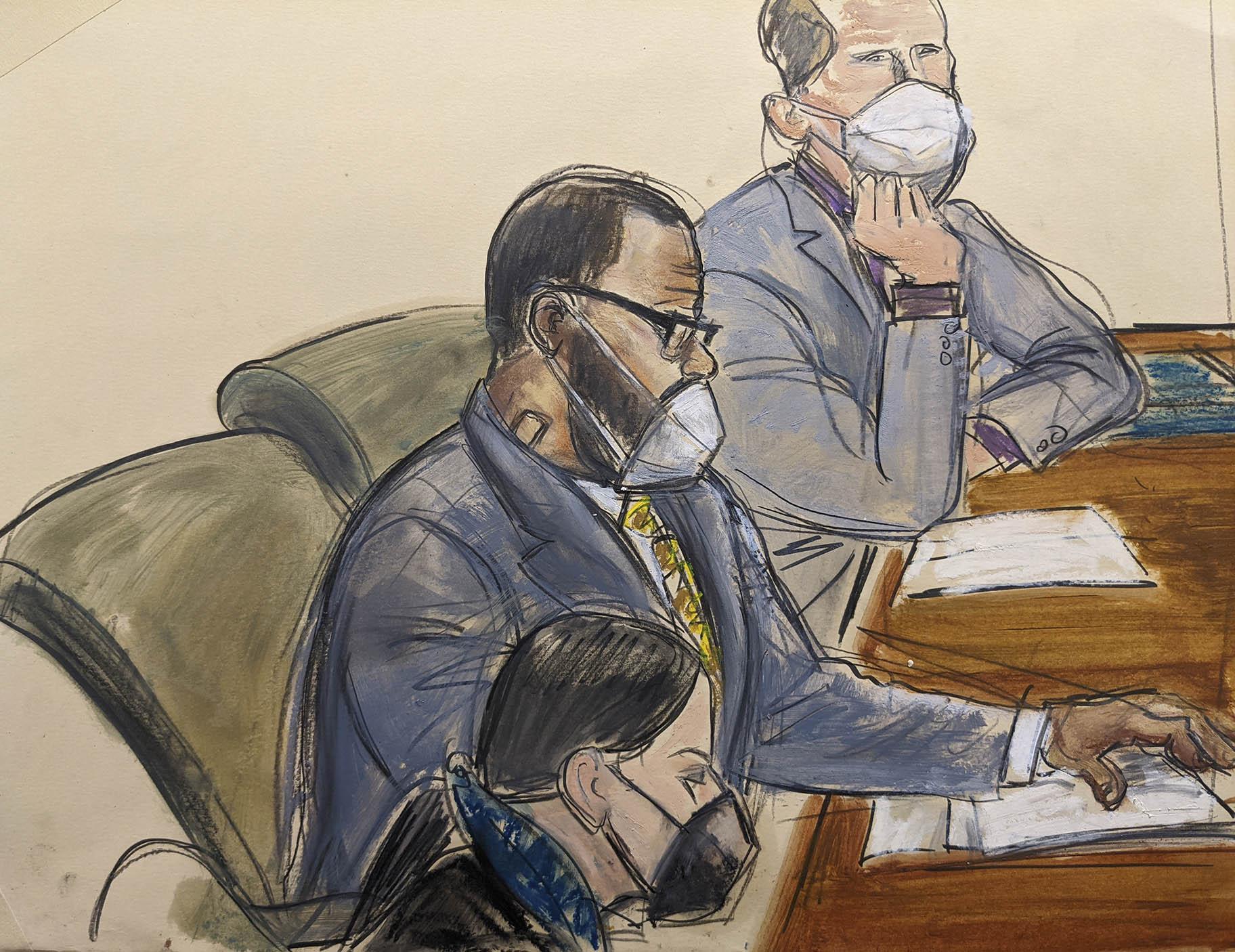 In this courtroom sketch, R. Kelly, center, sits with his defense attorneys Thomas Farinella, top, and Nicole Blank Becker during the first day of his defense in his sex trafficking case, Monday, Sept. 20, 2021, in New York. (AP Photo / Elizabeth Williams)

NEW YORK (AP) — A prosecutor in closing arguments at the sex-trafficking trial of R. Kelly urged jurors on Thursday to make the R&B superstar “pay” for his alleged crimes, while a defense lawyer told them they’ve been misled by opportunistic accusers about consensual relationships.

“It is now time to hold the defendant responsible for the pain he inflicted on each of his victims,” Assistant U.S. Attorney Elizabeth Geddes said in concluding her closing in federal court in Brooklyn that spanned two days. “It is now time for the defendant, Robert Kelly, to pay for his crimes. Convict him.”

Defense attorney Deveraux Cannick countered by telling the jury that testimony by several accusers was full of lies, and that “the government let them lie.”

He added: “Where the fairness to Robert? Where’s the integrity of the system?”

The exchange came with trial nearing jury deliberations after testimony from dozens of witnesses since the beginning of the proceedings on Aug. 18. Jurors could get the case as soon as Friday afternoon.

The 54-year-old Kelly, perhaps best known for the 1996 smash hit “I Believe I Can Fly, “ has pleaded not guilty to racketeering charges accusing him of abusing women, girls and boys for more than two decades. He’s also charged with multiple violations of the Mann Act, which makes it illegal to transport anyone across state lines “for any immoral purpose.”

Geddes gave an exhaustive recitation of evidence the government says proves how Kelly, with the help of some loyal members of his entourage, used tactics from “the predator playbook” to sexually exploit his victims.

The tactics included isolating them in hotel rooms or his recording studio, subjecting them to degrading rules like making them call him “Daddy” and shooting video recordings of them having sex with him and others as a means to control them, prosecutors said.

Geddes described one of several graphic homemade videos in evidence — seen by the jury during testimony, but not by the public. She said it showed Kelly grabbing one of his victims by the hair and forcing her to give another man oral sex. The woman submitted “because her will had been broken,” the prosecutor said.

The defense argued that it would make no sense for a celebrity like Kelly to set up a criminal enterprise to entrap victims.

Someone like Kelly “didn’t have to recruit women,” Cannick said.

He also argued the accusers were never forced to do anything against their will. Instead, his girlfriends stuck around because Kelly spoiled them with free air travel, shopping sprees and fancy dinners — treatment that belied the predator label, he said.

“He gave them a lavish lifestyle,” he said. “That’s not what a predator is supposed to do.”

Cannick even went as far as comparing Kelly’s case to the struggle led by civil rights legend Martin Luther King Jr. for equal protections under the U.S. Constitution.

“And that’s all that Robert wants — to make (the government) true to what it says on paper,” he said.