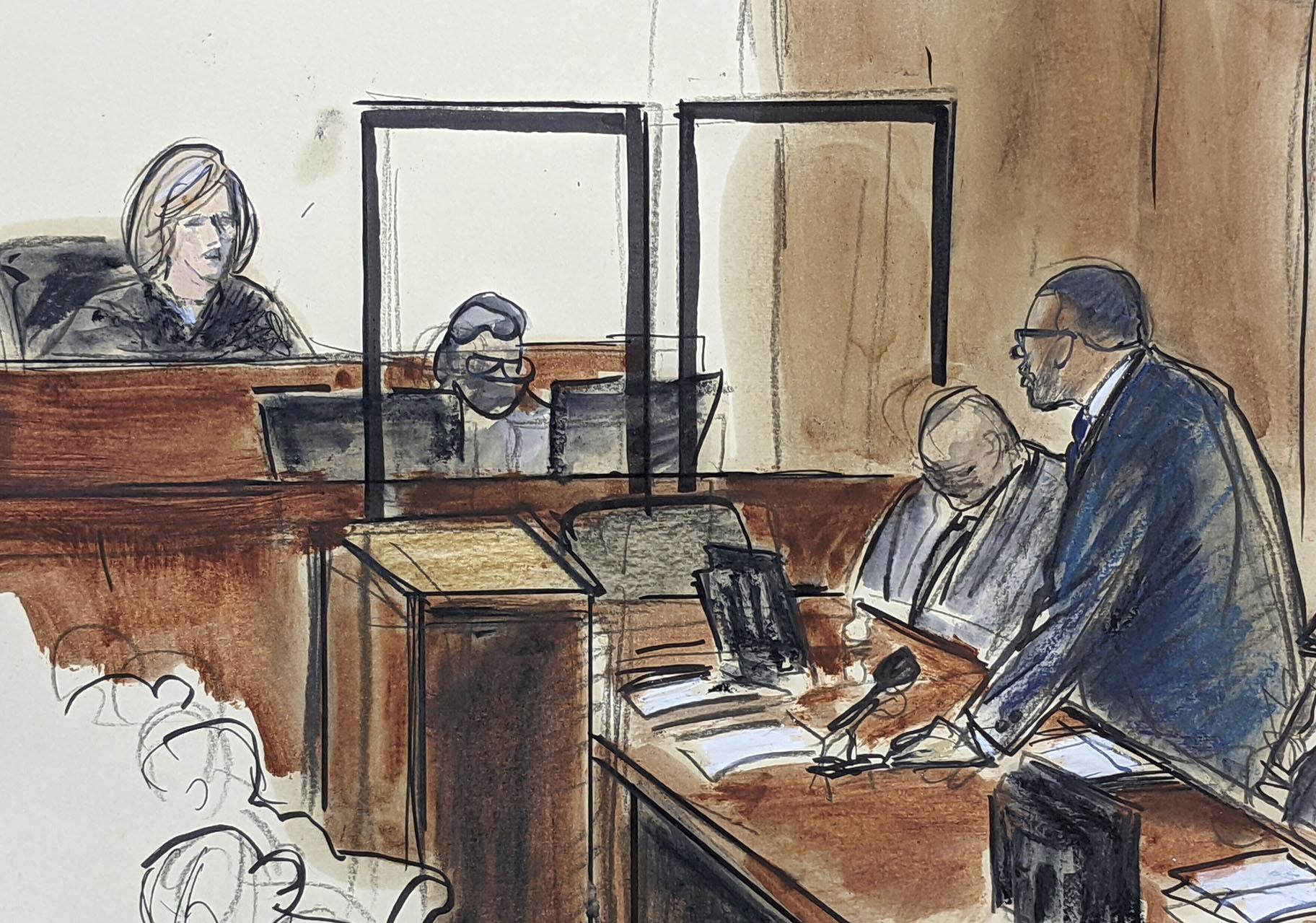 In this illustration drawn from a video feed, R. Kelly, right, stands and responds to Judge Ann Donnelly’s question whether or not he has decided to take the stand in his own defense, Wednesday, Sept. 22, 2021, in New York. (AP Photo / Elizabeth Williams)

NEW YORK (AP) — R. Kelly got away with sexually abusing underage victims for more than two decades by ruling his inner circle enablers with an iron fist, a prosecutor told jurors on Wednesday at the R&B singer’s sex-trafficking trial.

“The defendant set rules, lots of them, and he demanded complete obedience,” Assistant U.S. Attorney Elizabeth Geddes said during closing arguments in federal court in Brooklyn.

Among the secrets was Kelly’s 1994 marriage to the up-and-coming singer Aaliyah  when she was 15, the prosecutor said. Only a few days later, the defendant “didn’t skip a beat” by allegedly sexually assaulting a 17-year-old in his dressing room after a concert in Miami, she said.

The government had accused Kelly in opening statements last month of organizing a network of assistants, bodyguards and others at his disposal “to target, groom and exploit girls, boys and young women for his own sexual gratification.” Six weeks of testimony from more than 45 witnesses and other evidence proved “he did just that,” Geddes said.

The start of the government’s summation — to continue on Thursday — came after Kelly told U.S. District Judge Ann Donnelly that he won’t take the witness stand, allowing him to avoid the risk of a potentially brutal cross-examination.

Most of the defense witnesses said they never saw Kelly abuse anyone. One even said Kelly was “chivalrous” to his girlfriends. Another admitted he owed Kelly for his break in music business and wanted to see him beat the charges.

By contrast, prosecutors have called dozens of witnesses since the trial began in federal court in Brooklyn on Aug. 18. They included several female and two male accusers who testified that once they were in Kelly’s web, he groomed them for unwanted sex and psychological torment, mostly when they were teenagers. Their accounts were supported at least in part by other former Kelly employees, whose own testimony suggested they were essentially paid off to look the other way or enable the recording artist.

Jurors have heard evidence about a fraud marriage scheme hatched to protect Kelly after he feared he had impregnated Aaliyah. A marriage license that was put into evidence falsely listed her age as 18; he was 27 at the time.

The 54-year-old Kelly, perhaps best known for the 1996 smash hit “I Believe I Can Fly, “ has pleaded not guilty to racketeering charges. He’s also charged with that multiple violations of the Mann Act, which makes it illegal to transport anyone across state lines “for any immoral purpose.”

The defendant has vehemently denied the allegations, claiming that the accusers were groupies who wanted to take advantage of his fame and fortune until the #MeToo movement turned them against him.

Meanwhile, a judge at a hearing Wednesday in Chicago said that a criminal case there against Kelly will remain on hold until the New York trial is over.