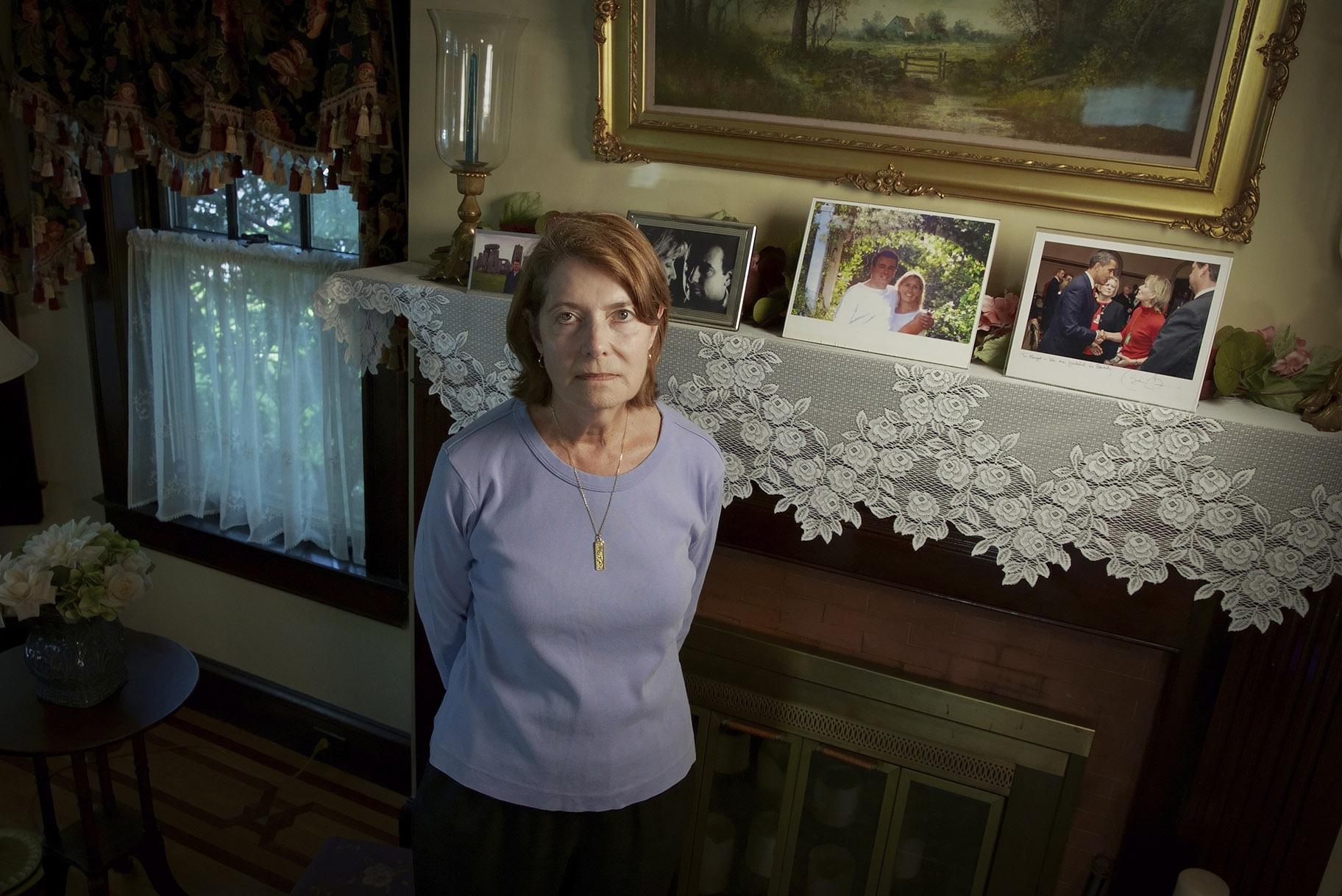 Margot Eckert stands by a display of pictures of her brother-in-law Sean Rooney and sister Beverly Eckert at her home, Thursday, July 15, 2021, in Springfield, Mass. (AP Photo / Robert Bumsted)

NEW YORK (AP) — For nearly six years, Andrea Haberman’s ashen and damaged wallet lay mostly untouched in a drawer at her parents’ Wisconsin home, along with a partly melted cell phone, her driver’s license, credit cards, checkbook and house keys. Flecks of rust had formed on the rims of her eyeglasses, their lenses shattered and gone.

Those everyday items were the remnants of a young life that ended when a hijacked jetliner struck the north tower of the World Trade Center on Sept. 11, 2001. Haberman was 25 and about to be married when she was killed while on a business trip from Chicago — her first visit to New York City.

Her belongings, still smelling of Ground Zero, evoked mostly sorrow for Haberman’s family. To ease their pain, they donated the artifacts to the 9/11 Memorial & Museum.

“These are not the happy things you want to remember someone by,” said Gordon Haberman, her father.

The collection of some 22,000 personal artifacts — some on display at the 9/11 museum, and others on display at other museums around the country — provide a mosaic of lost lives and stories of survival: wallets, passports, baseball gloves, shoes, clothes and rings.

“Each person who makes up part of that tally was an individual who lived a life,” said Jan Ramirez, the museum’s chief curator and director of collections.

Many of those personal effects were plucked from the ruins of what was once the Twin Towers. Other items were donated by survivors or by the families of those who perished.

A woodworking square, screwdriver, pry bar and a toolbelt represent Sean Rooney, a vice president at Aon Corp. who died in the South Tower. Rooney’s essence was that of “a builder,” his sister-in-law Margot Eckert said, making the carpenter’s tools donated to the museum the “perfect antidote to the destruction.”

Rooney had phoned his wife, Beverly Eckert, at their home in Stamford, Connecticut, after being trapped by fire and smoke on the 105th floor. He spent his last breaths recounting happier times, whispering, “I love you,” as he labored for air.

His remains were never found.

Beverly died eight years later in a plane crash while traveling to her husband’s high school in Buffalo, New York, to award a scholarship in his honor. Before she died, she had set aside the items she hoped would help tell her husband’s story, that of a weekend carpenter, handyman and volunteer with Habitat for Humanity.

For Robert Chin’s family, the story was about a love for playing softball. They recounted his first hit — a drive down the third-base line — playing for Fiduciary Trust International. To help savor the moment, his teammates scribbled congratulatory notes on the ball before presenting it to him.

Among the names on the ball were Pedro Francisco Checo and Ruben Esquilin Jr., who also died with Chin that day. That dusty softball Chin had kept at home is included among the trove of keepsakes in the 9/11 museum’s collection.

Not all of the donated artifacts are on behalf of those who died. Some came from those who survived 9/11.

Linda Raisch-Lopez donated her bloodied patent leather heels to represent her will to survive on a day she ran for her life.

As she made her way down a stairwell from the 97th Floor of the South Tower, she slipped out of her heels. and walked through the debris in her bare feet, according to the museum’s account. Somewhere on her way to a Hudson River pier, she had slipped back into her shoes, smearing blood on the tan leather from her cut and blistered feet.

Just a small part of the museum’s collection of artifacts is ever on display because there are too many to show at any one time. When not in public view, the artifacts are kept offsite, most in a facility across the Hudson River in New Jersey and others stored in a warehouse near Albany, New York. Row after row of shelves are stacked with boxes filled with tragedy and remembrance.