CDC Issues New Eviction Ban for Most of US Through Oct. 3 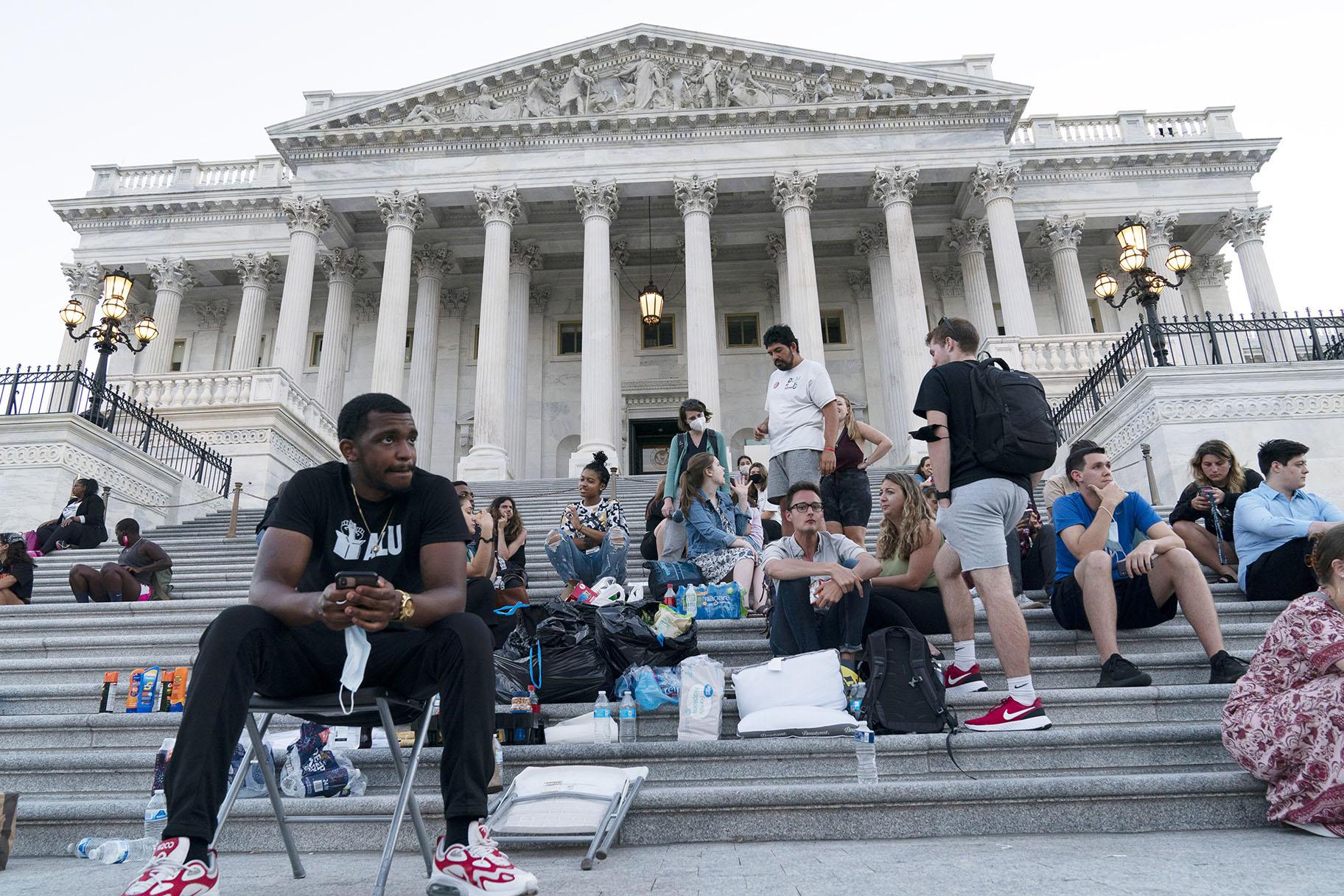 Supporters of Rep. Cori Bush, D-Mo., camp with her outside the U.S. Capitol, in Washington, Monday, Aug. 2, 2021, as anger and frustration has mounted in Congress after a nationwide eviction moratorium expired at midnight Saturday. (AP Photo / Jose Luis Magana)

WASHINGTON (AP) — The Centers for Disease Control and Prevention issued a new eviction moratorium that would last until Oct. 3, as the Biden administration sought to quell intensifying criticism from progressives that it was allowing vulnerable renters to lose their homes during a pandemic.

The ban announced Tuesday could help keep millions in their homes as the coronavirus’ delta variant has spread and states have been slow to release federal rental aid. It would temporarily halt evictions in counties with “substantial and high levels” of virus transmissions and would cover areas where 90% of the U.S. population lives.

The announcement was a reversal for the Biden administration, which allowed an earlier moratorium to lapse over the weekend after saying a Supreme Court ruling prevented an extension. That ripped open a dramatic split between the White House and progressive Democrats who insisted the administration do more to prevent some 3.6 million Americans from losing their homes during the COVID-19 crisis.

Speaking at the White House on Tuesday, Biden said he pushed the CDC to again consider its options. But he still seemed hesitant as to whether the new moratorium could withstand lawsuits about its constitutionality, saying he has sought the opinions of experts as to whether the Supreme Court would approve the measure.

“The bulk of the constitutional scholarship says that it’s not likely to pass constitutional muster,” Biden said. “But there are several key scholars who think that it may and it’s worth the effort.”

The president added that the moratorium — even if it gets challenged in court — “will probably give some additional time” for states and city to release billions of dollars in federal relief to renters.

Politically, the extension could help heal a rift with liberal Democratic lawmakers who were calling on the president to take executive action to keep renters in their homes. The administration had spent the past several days scrambling to reassure Democrats and the country that it could find a way to limit the damage from potential evictions through the use of federal aid.

But pressure mounted as key lawmakers said it was not enough.

Top Democratic leaders joined Rep. Cori Bush, D-Mo., who has been camped outside the U.S. Capitol for several days. The freshman congresswoman once lived in her car as a young mother and pointed to that experience to urge the White House to prevent widespread evictions.

As she wiped her eyes before a crowd at the Capitol after the CDC’s announcement, Bush said she was shedding “joyful tears.”

“My God, I don’t believe we did this,” she said. “We just did the work, just by loving folks to keep millions in their homes.”

House Speaker Nancy Pelosi said it was a day of “extraordinary relief.”

“The imminent fear of eviction and being put out on the street has been lifted for countless families across America. Help is Here!” Pelosi said in a statement.

Administration officials had previously said a Supreme Court ruling stopped them from setting up a new moratorium without congressional backing. When the court allowed the eviction ban to remain in place through the end of July by a 5-4 vote, one justice in the majority, Brett Kavanaugh, wrote that Congress would have to act to extend it further.

But on Tuesday, the CDC cited the slow pace of state and local governments disbursing housing aid as justification for the new moratorium.

Aside from the moratorium, Biden has insisted that federal money is available — some $47 billion previously approved during the pandemic — that needs to get out the door to help renters and landlords.

“The money is there,” Biden said.

The White House has said state and local governments have been slow to push out that federal money and is pressing them to do so swiftly.

Treasury Secretary Janet Yellen briefed House Democrats Tuesday about the work underway to ensure the federal housing aid makes it to renters and landlords. She provided data so that lawmakers could see how their districts and states are performing with distributing the relief, according to a person on the call.

The treasury secretary tried to encourage Democrats to work together, even as lawmakers said Biden should act on his own to extend the eviction moratorium, according to someone on the private call who insisted on anonymity to discuss its contents.

Yellen said on the call, according to this person, that she agrees “we need to bring every resource to bear” and that she appreciated the Democrats’ efforts and wants “to leave no stone unturned.”

The CDC put the initial eviction ban in place as part of the COVID-19 response when jobs shifted and many workers lost income. The ban was intended to hold back the spread of the virus among people put out on the streets and into shelters, but it also penalized landlords who lost income as a result.

National Apartment Association president and CEO Bob Pinnegar said the organization “has always held the same position — the eviction moratorium is an unfunded government mandate that forces housing providers to deliver a costly service without compensation and saddles renters with insurmountable debt.”

Democratic lawmakers said they were caught by surprise by Biden’s initial decision to end the moratorium even though the CDC indicated in late June that it probably wouldn’t extend the eviction ban beyond the end of July.

Rep. Maxine Waters, the powerful chair of the Financial Services Committee, has been talking privately for days with Yellen and urged the treasury secretary to use her influence to prod states to push the money out the door. But Waters also called on the CDC to act on its own.

After the CDC’s announcement Tuesday, Waters released a statement thanking Biden “for listening and for encouraging the CDC to act! This extension of the moratorium is the lifeline that millions of families have been waiting for.”