All Roads — Blocked Off Roads — Lead to Tokyo Olympics 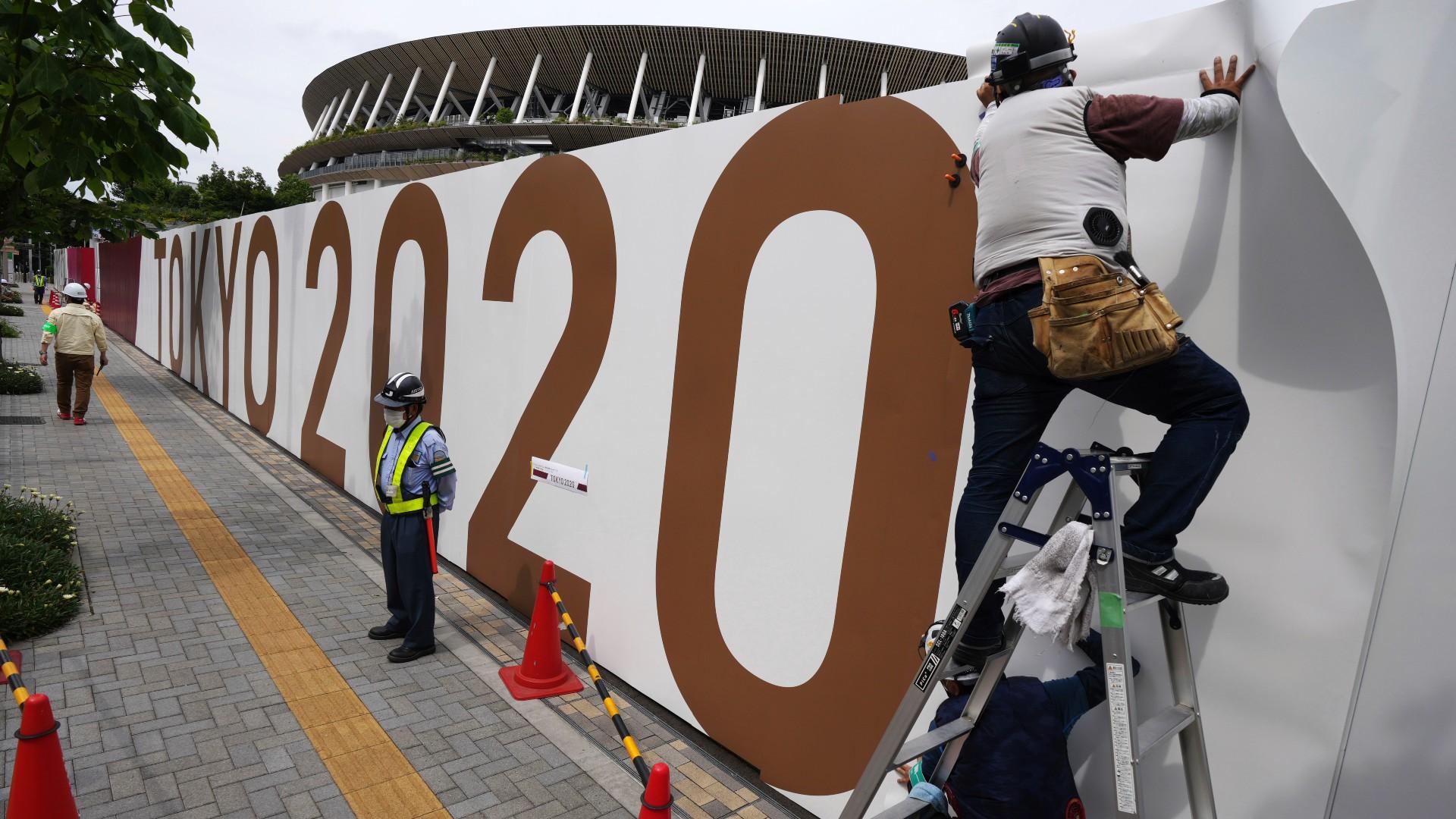 Workers paste the overlay on the wall of the National Stadium, where opening ceremony and many other events are scheduled for the postponed Tokyo 2020 Olympics, Wednesday, June 2, 2021, in Tokyo. (AP Photo / Eugene Hoshiko)

TOKYO (AP) — Roads were being closed off Tuesday around Tokyo Olympic venues, including the new $1.4 billion National Stadium where the opening ceremony is set for July 23.

This is a clear sign that Tokyo Olympic planners and the International Olympic Committee are moving forward despite public opposition, warnings about the risks of the games becoming a spreader event, and Tokyo and other parts of Japan being under a state of emergency until June 20.

“Today we are only 45 days away from the opening ceremony, although the state of emergency is in effect and the situation remains severe nationwide,” organizing committee president Seiko Hashimoto told an executive board meeting Tuesday. “The number of new COVID-19 cases in Tokyo has started to decrease little by little and we strongly hope the situation will be under control as soon as possible.”

New infections in Tokyo are down to around 500 cases a day from 1,000 a month ago. The number of hospitalizations and the seriously ill have also decreased, but the levels are still higher than last fall when COVID-19 variants were not prevalent in Japan.

Experts last week on the Tokyo Metropolitan Government’s pandemic panel said that movement of people in central Tokyo had been rising for three weeks. They warned new infections could rebound if people continue to increase their mobility.

The prime minister’s office said 3.66% of Japanese people were fully vaccinated as of Monday. It said 10.7% had at least one shot in what has been a slow vaccine rollout.

Japan has attributed about 13,500 deaths to COVID-19, good by some standards but not as low as many countries in Asia.

“The only viable way (to hold the Olympics) is to make it behind closed doors,” he said. “And the option of cancellation is possible.”

Dr. Hiroshi Oshitani, a virologist at Tohoku University and a government adviser, reminded about the potential spread of infection in Japan and in other countries after the Olympics.

“The government and the IOC ... keep saying they’re holding a safe Olympics,” Oshitani was quoted saying in the Times of London. “But everybody knows there is a risk. It’s 100% impossible to have an Olympics with zero risk.”

Toshiro Muto, the CEO of the organizing committee, warned that media entering Japan from abroad could be monitored by GPS to make sure they follow the rules that will be spelled out in the third edition of the so-called Playbooks due out later this month.

Muto said media would be tested twice before they left home, and for several days after they enter Japan. He said they would have to sign a “pledge” to follow the rules, and would be restricted from free movement for the first 14 days.

“If any violations are found, measures such as suspension or deprivation of accreditation and deportation proceedings will be strictly applied,” Muto said.

He said reporters’ phones could be tracked with GPS to see if rules had been broken.

“We can use the GPS and if they’re going to places outside the business destinations, that will become very apparent,” he said. “After 14 days they can engage in the normal media activity and coverage.”

He did not clarify if the strict tracking will apply to tens of thousands of others who will enter Japan for the Olympics and Paralympics, including IOC officials, officials of national Olympic committees and sports federations, broadcasters, and others arriving to work as contractors at the games.

Pushback against the Olympics remains strong with 50-80% opposed to the games going ahead depending how the question is phrased. Saitama prefecture, just north of Tokyo, on Monday called off plans for two public viewing areas.

Kaori Yamaguchi, an Olympic bronze medalist for Japan in judo in 1988 and a Japanese Olympic Committee board member, wrote last week that Tokyo and Japan had been “cornered” into holding the Olympics.

The IOC is pressing ahead, reliant on broadcast rights for 73% of its income.

Japan has officially spent $15.4 billion to organize the Olympics, and government audits say it’s much larger. All but $6.7 billion is private money. The IOC’s overall contribution is about $1.5 billion.

In the latest numbers provided by local organizers, 11,090 Olympians are lined up to enter Tokyo. In addition, 59,000 other people will enter for the Olympics for a total of 70,090.

Combined, that is 93,490 people for both events. Organizers say the number is 50% less than the original forecast of 180,000 entering for the Paralympics and Olympics.

Although organizers confirmed those numbers, Muto suggested 105,000 people might be the total number for the Olympics and Paralympics. Organizers did not offer immediate clarification.