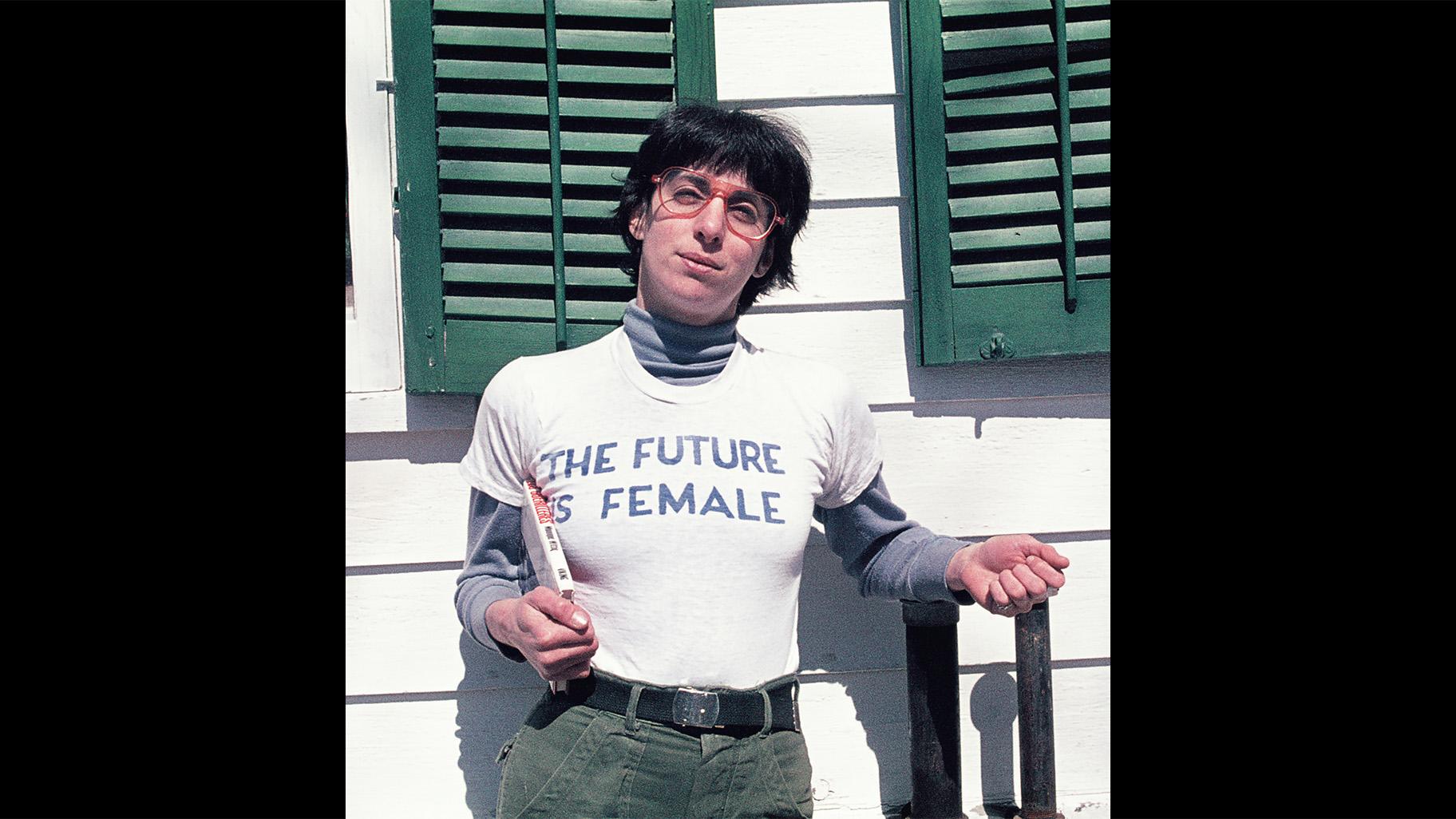 Alix Dobkin poses in a t-shirt that reads "The Future is Female" in Preston Hollow, N.Y. in 1975. Dobkin, the lesbian singer and feminist activist, died in her home from a brain aneurysm and stroke. She was 80. (Liza Cowen via AP)

NEW YORK (AP) — The lesbian singer and feminist activist who appeared in an iconic and recently resurgent 1975 photo wearing a t-shirt that read “The Future is Female,” has died. Alix Dobkin of Woodstock, New York, was 80.

An early leader in the music scene for lesbians and women, she passed away at her home from a brain aneurysm and stroke, according to Liza Cowan, her friend and former partner.

“Everything that she did was about being a public lesbian in the world,” said Cowan, who also took the striking photo.

In 1973, Dobkin formed the group Lavender Jane with musician Kay Gardner. With an all-women team of musicians, engineers and even vinyl pressers, they recorded the album “Lavender Jane Loves Women” — the first ever to be entirely produced by women, Cowan said.

Dobkin had been performing in the folk music scene in Philadelphia and New York in the 1960s, where she mingled with future superstars like Bob Dylan, according to her 2009 memoir “My Red Blood.” The title references her parents’ and her own membership in the Communist party.

When she came out as a lesbian, she forged ahead musically as an early leader and then mainstay of Women’s Music, a genre made by, for and about women. The genre fostered a whole network of publications, recording labels, venues and festivals starting in the 1970s.

“She became an iconic, kind of bigger-than-life figure for women who identified as lesbians,” said Eileen M. Hayes, author of the book “Songs in Black and Lavender,” a history of Black women’s involvement in the movement.

Dobkin sang songs like “Lesbian Code,” that playfully lists the many ways women interested in women identify each other. She also had a version of the alphabet song that begins, “A, you’re an Amazon.” Dobkin, who was Jewish, often played Yiddish songs during her performances and told stories she had heard growing up in Philadelphia.

She often performed for all-women audiences. An undated flyer advertising one of Dobkin’s shows explained all-women concerts offered women the opportunity “to come together to develop our culture as part of the process of taking control of our lives.” It asked men who supported the struggle against sexism not to attend.

A friend and collaborator, Kathy Munzer, produced shows for lesbians in Chicago for more than 30 years and called Dobkin “The Head Lesbian,” saying in a Facebook post that she inspired others to take pride in who they were.

Before the AIDS epidemic, lesbian and gay organizations operated separately, Hayes said. A prominent women’s festival where Dobkin played for years, the Michigan Womyn’s Music Festival, excluded transwomen from attending. In 2000, Dobkin wrote in defense of cis-women-only spaces while also seeking out conversations with transwomen and defending the right of everyone to love and be themselves.

“I especially worry about the narrowing of women’s identity and the erasure of women’s history. For voicing these considerations we have been attacked as ‘bigoted,’ ‘transphobic’ and worse, but are these not credible concerns?” she wrote in a column in the Windy City Times.

Reflecting on the fight about cis-women-only spaces, Hayes said at the beginning of the women’s movement, “it was a statement about, who is this movement supposed to benefit the most?”

The choice to create a parallel media ecosystem also reflected how difficult it was for women to break into the mainstream music industry, Hayes said.

“It didn’t support women as performers, and singers, and engineers and advertising people,” Hayes said. “It’s still very hard for women to break into the industry.”

Hayes called the newfound fame of the slogan “The Future is Female” and the reemergence of the photo of Dobkin “fabulous.”

The slogan originated from a woman’s bookstore in New York, Labyris Books, that had screenprinted a small run of the shirts, Cowan said. She photographed Dobkin wearing one for an article she was writing about lesbian fashion. An Instagram post in 2015 by @h_e_r_s_t_o_r_y, an account that chronicles lesbian history, featured the image. That inspired an unaffiliated company to print the T-shirts again and eventually introduced the slogan to a new generation, according to the New York Times.

“What we’ve learned through the women’s movement is that, yeah, the future is female, but it’s not a uni-dimensional female,” Hayes said. “It’s a female identity that is constructed with various threads, various backgrounds, and that is the corrective our new generation makes to the failings of earlier generations.”

In the weeks before her death, Dobkin’s family kept a public diary about her health that drew thousands of comments from friends and fans. They wrote of how Dobkin’s music provided them comfort, guidance and community.

“And still you bring us together again, wonderous woman you are!!!” read one comment.

Before coming out as a lesbian, Dobkin married Sam Hood, whose father owned a folk music venue in New York where she had played. Dobkin is survived by him, their daughter, Adrian, and three grandchildren, among other family members, former partners and fans.

As a historian and witness to the women’s movement, Hayes said she was grateful to have had Dobkin’s musical and political leadership.

“I think that the death of Alix Dobkin just reminds us of how far we’ve come in terms of LGBTQ right to life,” she said. “And right to life as in the right to be.”