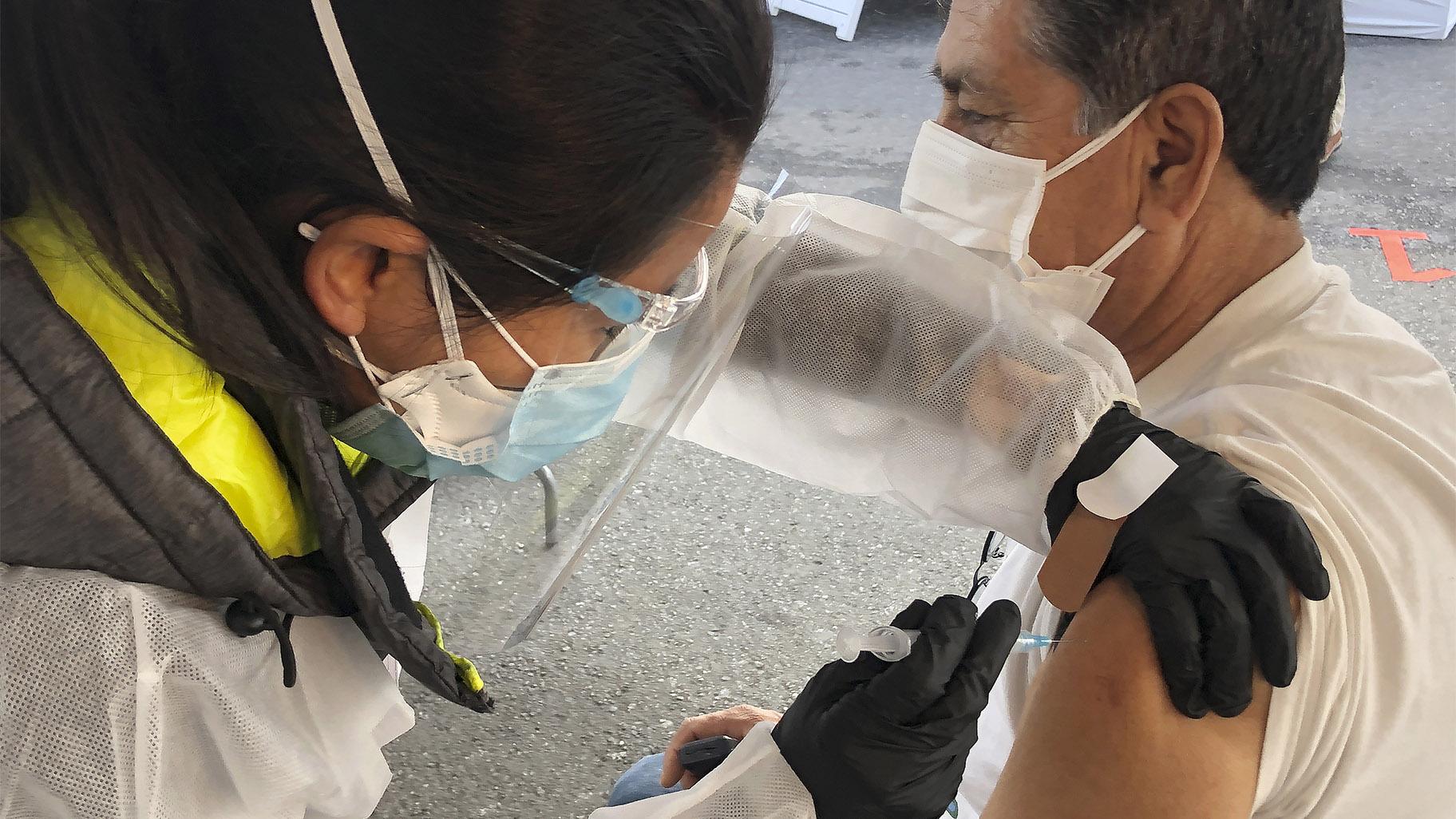 In this Feb. 8, 2021 file photo, Juan Delgado, 73, right, receives a COVID-19 vaccine shot from a health care worker at a vaccination site in the Mission district of San Francisco. (AP Photo / Haven Daley)

WASHINGTON (AP) — Many Latinos are forgoing COVID-19 shots because of concerns about losing work hours, getting a bill, and for some, immigration worries. That’s according to a new poll that offers insights into how to raise vaccination rates among the nation’s largest ethnic minority.

One in 3 unvaccinated Latino adults said they want to get a COVID-19 vaccine as soon as possible —twice the share among unvaccinated white adults (16%) or Blacks (17%).

“It is not about vaccine hesitancy; it is about logistics,” said Jane Delgado, president of the National Alliance for Hispanic Health, a nonprofit that seeks to include the Latino perspective in health policy debates. She’s seen national ad campaigns miss Hispanics time and again. “What we need is people helping people to actually get the vaccines,” said Delgado.

Vaccines are now in plentiful supply, but with COVID-19 cases falling the daily number of people getting a shot has slipped. The U.S. remains short of the level of protection needed for widespread immunity to the coronavirus. And there are ongoing concerns about the emergence of variants that could prove resistant to vaccines.

Overall, the poll found that 60% of white adults have gotten at least one shot. That dropped to 47% of Latinos. Blacks also lagged, but not as much, with 51% getting at least one dose.

Work was the chief concern among unvaccinated Latino adults. Sixty-four percent worried about missing work because of side effects from vaccination, as compared to 41 percent of unvaccinated adult whites and 55% of Blacks.

President Joe Biden has urged employers to actively help workers get vaccinated, including providing paid time off. His COVID relief law incorporates a tax credit for small and medium-sized businesses to offset the costs of leave. Hispanics are over-represented in low-wage occupations where jobs often don’t come with benefits, such as restaurant work, cleaning services, landscaping, and construction and handyman labor.

“Losing two days of work for two vaccines is a lot when you’ve already struggled all year round,” said Delgado.

By law and government policy, COVID-19 vaccines are available free of charge to all. But many Hispanics were not so sure of that. A little more than half of unvaccinated Latino adults were concerned about facing out-of-pocket costs.

The poll also found an undertow of worries that getting a vaccine might trigger problems with immigration authorities, although even the immigration-restricting Trump administration had said that would not be an issue.

Thirty-five percent of unvaccinated Hispanic adults said they were afraid of negative immigration consequences to them or a family member.

Showing a driver’s license or health insurance card is standard practice for people getting vaccinated, but 39% percent of unvaccinated Latinos said being asked for identification would be a concern.

Kaiser Foundation pollster Liz Hamel said the survey offers a roadmap for federal, state and local health officials trying to connect with Hispanic people. “There are opportunities for work to be done on the ground, in communities,” she said. “It’s about making it more convenient. There’s a significant group of people who haven’t gotten vaccinated because it’s too much of a hassle.”

One significant finding points to a possible path for connecting with Latinos: Those who have gotten vaccinated were about twice as likely as whites or Blacks to have received their shots at a community health center. Federally funded health centers at some 13,000 locations cater to low-income people regardless of the patient’s immigration status.

The poll found that Hispanics are no strangers to the toll of the pandemic. Thirty-eight percent of Hispanic adults said a friend or close family member had died of COVID-19, compared with 18% of white adults. The share of Latinos saying they are very worried that they or a family member will get sick from the virus (41%) was four times higher than among whites.