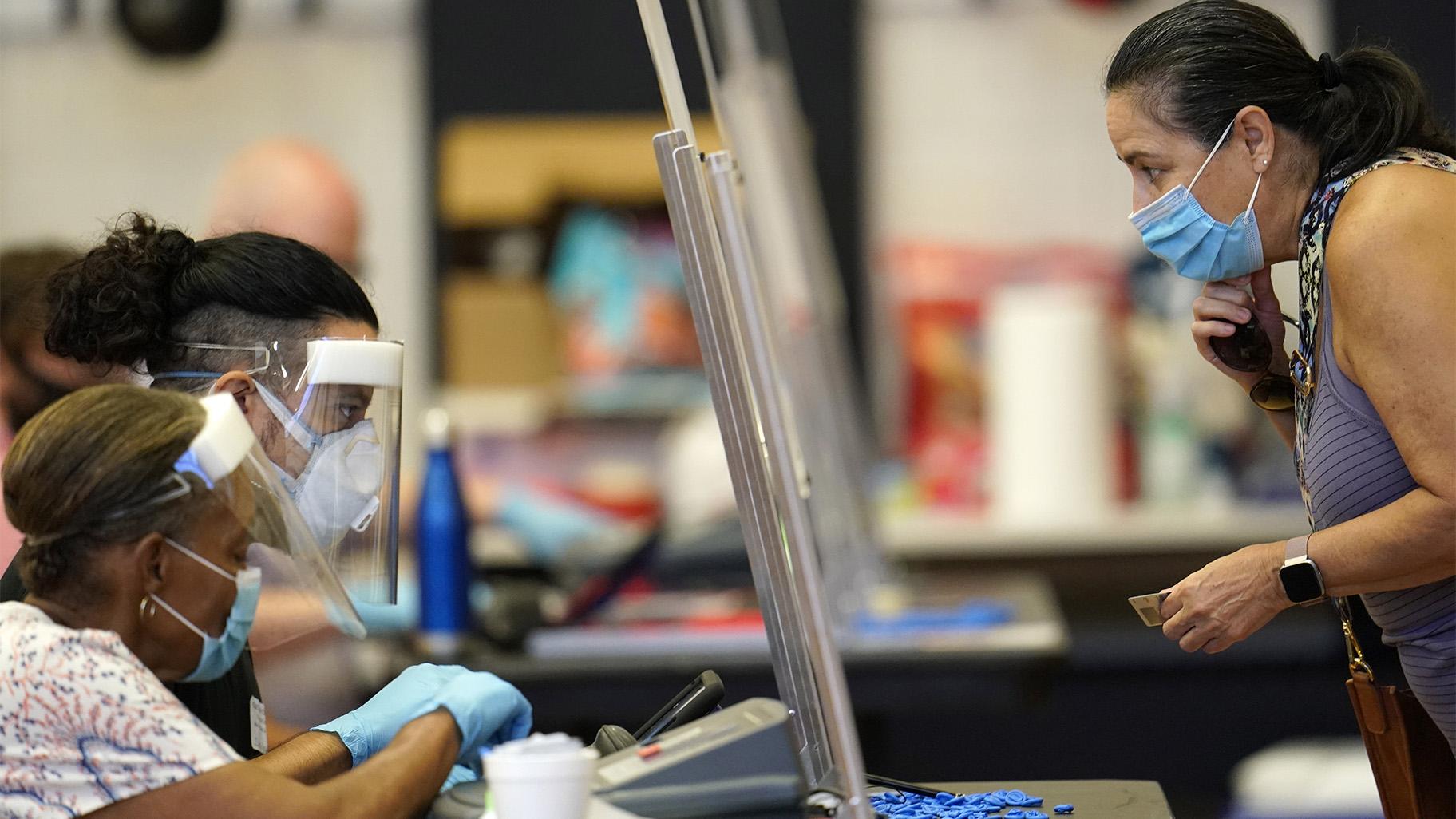 ATLANTA (AP) — Liberal activists are stepping up calls for corporate America to denounce Republican efforts to tighten state voting laws, and businesses accustomed to cozy political relationships now find themselves in the middle of a growing partisan fight over voting rights.

Pressure is mounting on leading companies in Texas, Arizona and other states, particularly after Major League Baseball’s decision Friday to move the 2021 All-Star Game out of Atlanta. A joint statement from executives at nearly 200 companies, including HP, Microsoft, PayPal, Target, Twitter, Uber and Under Armour, took aim at state legislation “threatening to make voting more difficult" and said “elections are not improved” when lawmakers impose new barriers to voting.

The outcry comes a week after Georgia Republicans enacted an overhaul of the state's election law that critics argue is an attempt to suppress Democratic votes.

Other companies have, somewhat belatedly, joined the chorus of critics.

Delta Air Lines and The Coca-Cola Co., two of Georgia’s best-known brands, this past week called the new law “unacceptable," although they had a hand in writing it. That only angered Republicans, including Georgia Gov. Brian Kemp and several U.S. senators, who accused the companies of cowering from unwarranted attacks from the left.

The fight has thrust corporate America into a place it often tries to avoid — the center of a partisan political fight. But under threat of boycott and bad publicity, business leaders are showing a new willingness to enter the fray on an issue not directly related to their bottom line, even if it means alienating Republican allies.

“We want to hold corporations accountable for how they show up when voting rights are under attack,” said Marc Banks, an NAACP spokesman. “Corporations have a part to play, because when they do show up and speak, people listen.”

Civil rights groups have sued to block the new Georgia law, which was passed after Democrats flipped the once-reliably Republican state in an election that Donald Trump falsely claimed was rife with fraud. Some activists have called for consumer boycotts of Delta, Coca-Cola and others. They dismiss business leaders’ assertions that they helped water down the bill to ease earlier, more restrictive proposals; those leaders, they argue, should have tried to block the plan altogether.

In Texas, the NAACP, League of Women Voters and League of United Latin American Citizens, among other organizations, are urging corporations in the state to speak out against a slate of Republican-backed voting proposals. “Democracy is good for business,” the campaign says.

Nine organizations took out full-page ads in The Houston Chronicle and The Dallas Morning News, the state’s leading newspapers, urging corporate opposition to the plan. The Texas proposal would limit some early voting hours, bar counties from setting up drive-thru voting and prohibit local officials from proactively sending applications for mail ballots before voters request them.

Unlike their Georgia-based counterparts, American Airlines and Dell Technologies didn’t wait for the Texas measure to pass. “To make American’s stance clear: We are strongly opposed to this bill and others like it,” American said in a statement.

Arizona, which Biden flipped from Trump in November, hasn’t seen high-profile corporate players engage yet. But 30-plus groups sent a joint letter to Allstate Insurance, CVS Health and Farmers’ Insurance, among others, urging their public opposition to proposed voting restrictions. Emily Kirkland, executive director of Progress Arizona, a progressive group that signed the letter, said there's been no response yet.

Other groups are demanding that corporations focus on Washington, where congressional Democrats are pushing measures intended to make it easier for Americans to vote, regardless of state laws. Among the changes, Democrats would enact automatic voter registration nationally and standardize access to early and mail voting.

Democrats also want to restore parts of the Voting Rights Act of 1965 that require the federal government to approve all election procedures in states and locales with a history of discrimination. The Supreme Court struck down those provisions, which applied to Georgia and Arizona, among other states, in 2013.

Corporate giants were mostly quiet when Trump falsely claimed he lost because of fraud. Business leaders largely maintained that caution as Republican state lawmakers used Trump's lie to justify a flood of new bills to make it more cumbersome to vote.

The reticence was a stark contrast to how chambers of commerce reacted six years ago when Republican-run states pushed “religious freedom” measures. Indiana, under then-Gov. Mike Pence, the future vice president, saw immediate corporate backlash. After North Carolina passed a “bathroom bill” limiting LGBTQ rights in 2016, PayPal scuttled expansion plans there and the NBA moved its all-star game from Charlotte. An AP analysis in 2017 found the reaction would eventually cost North Carolina at least $3.76 billion in lost business.

Then, Georgia’s corporate lobbying groups — with Delta’s and Coca-Cola’s backing — took no such chances, speaking out forcefully against Georgia conservatives' version of a “religious freedom” bill. Lawmakers passed it anyway but Kemp’s predecessor, Republican Nathan Deal, vetoed it amid the chamber outcry.

Some Republicans dispute the comparison. Brian Robinson, a former top Deal aide who was part of the business coalition that publicly opposed the religious freedom bill, argued that measure “was clearly discriminatory” against LGBTQ citizens, while the nearly 100-page election bill is less clear-cut and is being misrepresented by Democrats and their allies.

Companies are reacting to “Twitter mobs demanding reaction to their false narrative,” he said.

Still, Delta and Coca-Cola's response to the Georgia voting fight is standing as a cautionary tale for other businesses.

Ed Bastian, the airline’s chief executive, initially released a statement noting the business lobby’s role in altering the bill as it moved through the General Assembly. Officials at the Atlanta Metro Chamber, where Bastian currently serves as president, detailed how corporate lobbyists spent weeks at the Capitol on mitigating provisions.

The final law preserved no-excuse absentee voting and automatic registration. The new ID requirement for absentee ballots allows a voter to write their state ID number, rather than produce a photocopy, and the legislature included funding for free state IDs. The law also codifies in-person early voting on weekends, although it allows counties to choose whether to be open for voting for up to two Sundays. And it made drop boxes of mail ballots a permanent fixture in Georgia, but limited the number.

Business leaders’ philosophy, according to Democratic state Sen. Jen Jordan, was “basically, Republicans are going to pass something, so they might as well try to keep from being awful.”

But by Wednesday, the same day 72 Black business executives published a letter in The New York Times urging corporate leaders to speak out, Bastian was more direct. He sent a companywide memo declaring the law “unacceptable” and “based on a lie” — though he didn’t mention Trump.

Big business’s mistake, Jordan said, was “thinking there was ever any version that wouldn’t end up like this.”