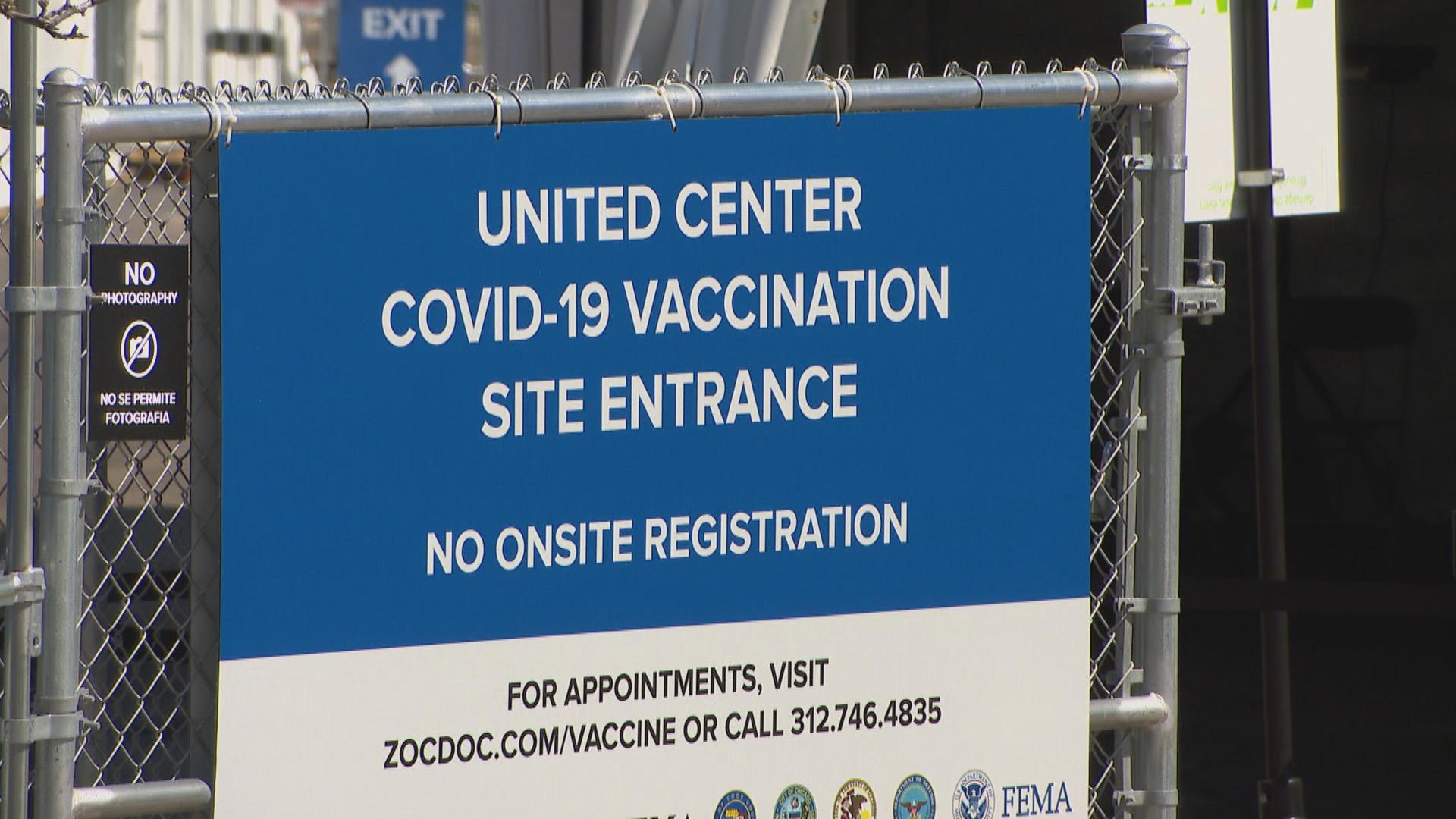 A sign at the United Center mass vaccination site on March 29, 2021. (WTTW News)

Confirmed cases of COVID-19 are continuing to surge among young Chicagoans on the city’s North Side and there is no sign that will change anytime soon, Chicago’s top doctor said Thursday.

“We can see that the numbers are continuing to rise, without any sign of decrease at this point,” Dr. Allison Arwady, the commissioner of the Chicago Department of Public Health, said in an online question-and-answer session Thursday.

Arwady first warned Chicagoans nine days ago that the confirmed number of COVID-19 cases and illnesses were rising in the city.

Since then, the average number of Chicagoans who have been diagnosed each day with the coronavirus has risen 48%, according to data provided by the Chicago Department of Public Health.

Cases are rising fastest among White Chicagoans ages 18-40 who live on the North Side, a significant change from the early days of the pandemic when COVID-19 disproportionately infected Black and Latino Chicagoans living on the city’s South and West sides.

The increase is being fueled by the spread of variants of COVID-19 that are believed to be more transmissible, especially one first discovered in the United Kingdom, Arwady said.

To prevent the spread of COVID-19 and its variants, Illinois officials are urging people to wear a mask, stay 6 feet away from those who are not in their household, avoid large gatherings and unnecessary travel, and wash their hands often.

Data suggests current vaccines will be effective and safe in providing protection against the UK variant, officials said.

Chicagoans should not gather to celebrate Passover and Easter unless everyone in the group is vaccinated, Arwady said.

While Arwady said she confident that rules in place inside Wrigley Field would be effective in stopping the spread of COVID-19, she was worried that Opening Day gatherings outside the ball park could fuel the surge.

“Celebrate, but be careful,” Arwady said.

An average of 519 Chicagoans have been diagnosed each day with the coronavirus during the past week, and the city’s test positivity has risen to 4.6%, according to city data. A test positivity of 5% or more indicates that the virus is spreading unchecked, officials said.

Less than 15% of all Chicagoans have been fully vaccinated, Arwady said.

Chicago officials expect to get 39,900 vaccine doses from Johnson & Johnson next week, a massive increase from previous weeks, Arwady said.

READ: Another Spike in COVID-19 Cases Shows Clear Pattern, Cause for Caution

However, it is not clear whether the city can count on having an ample supply of the one-dose vaccine on hand in future weeks after a manufacturing error at a Baltimore plant spoiled 15 million doses of Johnson & Johnson’s vaccine, Arwady said.

The increase comes after Mayor Lori Lightfoot allowed indoor dining and drinking at bars and restaurants to operate at 50% of their normal capacity, or no more than 50 people, on March 2. The city also expanded the number of customers businesses can serve outdoors on March 25.

In addition, Chicago Public Schools reopened for in-person learning for students in kindergarten through eighth grade on March 8.

Cases of COVID-19 can take up to 14 days to develop, and schools reopened for the first time in nearly a year 24 days ago.