The Chicago Police Department botched nearly every aspect of its response to the protests and unrest triggered by the death of George Floyd on May 25 in Minneapolis police custody, undermining efforts to rebuild the community’s trust in the department, according to a report from the city’s watchdog released Thursday.

As a result, some of those who looted stores and destroyed city property during the unrest that began May 29 and ended June 7 will never be charged — while officers who struck, punched and kicked protestors will not be held accountable, according to the report from Inspector General Joseph Ferguson.

The Chicago Police Department was “under-prepared and ill-equipped, and thus critically disserved both its own front-line members and members of the public,” according to the inspector general’s report, the first in-depth examination of the police department’s response to the unrest.

“While the challenges were daunting, and in some respects unprecedented in recent memory, the efforts of CPD and the city to stem unrest were marked, almost without exception, by confusion and lack of coordination in the field emanating from failures of intelligence assessment, major event planning, field communication and operation, administrative systems and, most significantly, leadership from CPD’s senior ranks,” according to the 150-page report, which was compiled by Deborah Witzburg, the deputy inspector general for public safety.

Nusrat Choudhury, the legal director of the American Civil Liberties Union of Illinois, said the report makes it clear that under pressure, "Chicago police retreated to their usual, discriminatory practices."

"It is ironic and unacceptable that protests that decried police violence were met with yet more police violence, efforts to evade accountability, and racial injustice," Choudhury said. "This is a sad legacy for the city.”

The report, which is also highly critical of Mayor Lori Lightfoot, depicts Superintendent David Brown, who took the helm of the Chicago Police Department little more than a month before Floyd’s death, as slow to react to the threat posed by the unrest and confused at key moments.

“In the aggregate, CPD’s senior leadership failed the public they are charged with serving and protecting and they failed the department’s rank-and-file members and front-line supervisors, who were at times left to high-stakes improvisation without adequate support or guidance,” according to the report.

The impact of those failures have been profound, especially on the yearslong effort to reform the department after a 2017 federal investigation found officers routinely violated the civil rights of Black and Latino Chicagoans, according to the report.

“And to the extent that public video and public reporting captured out-of-policy, dangerous, and disrespectful actions by CPD members, the events of May and June 2020 may have set CPD and the City back significantly in their long-running, deeply challenged effort to foster trust with members of the community,” according to the report.

The monitoring team that reports to the federal judge overseeing efforts to reform the Chicago Police Department is also expected to issue a report on the department’s conduct during protests in the coming weeks.

More than 70 people were interviewed, and more than 100 hours of body-worn camera footage were reviewed as part of the probe, according to the report.

In a written response to the inspector general’s report, Brown acknowledges that the police department “struggled with certain aspects of its response.”

The department will use the inspector general’s “findings as an additional tool to self-evaluate and move forward to be a better police department for the city of Chicago,” Brown wrote. 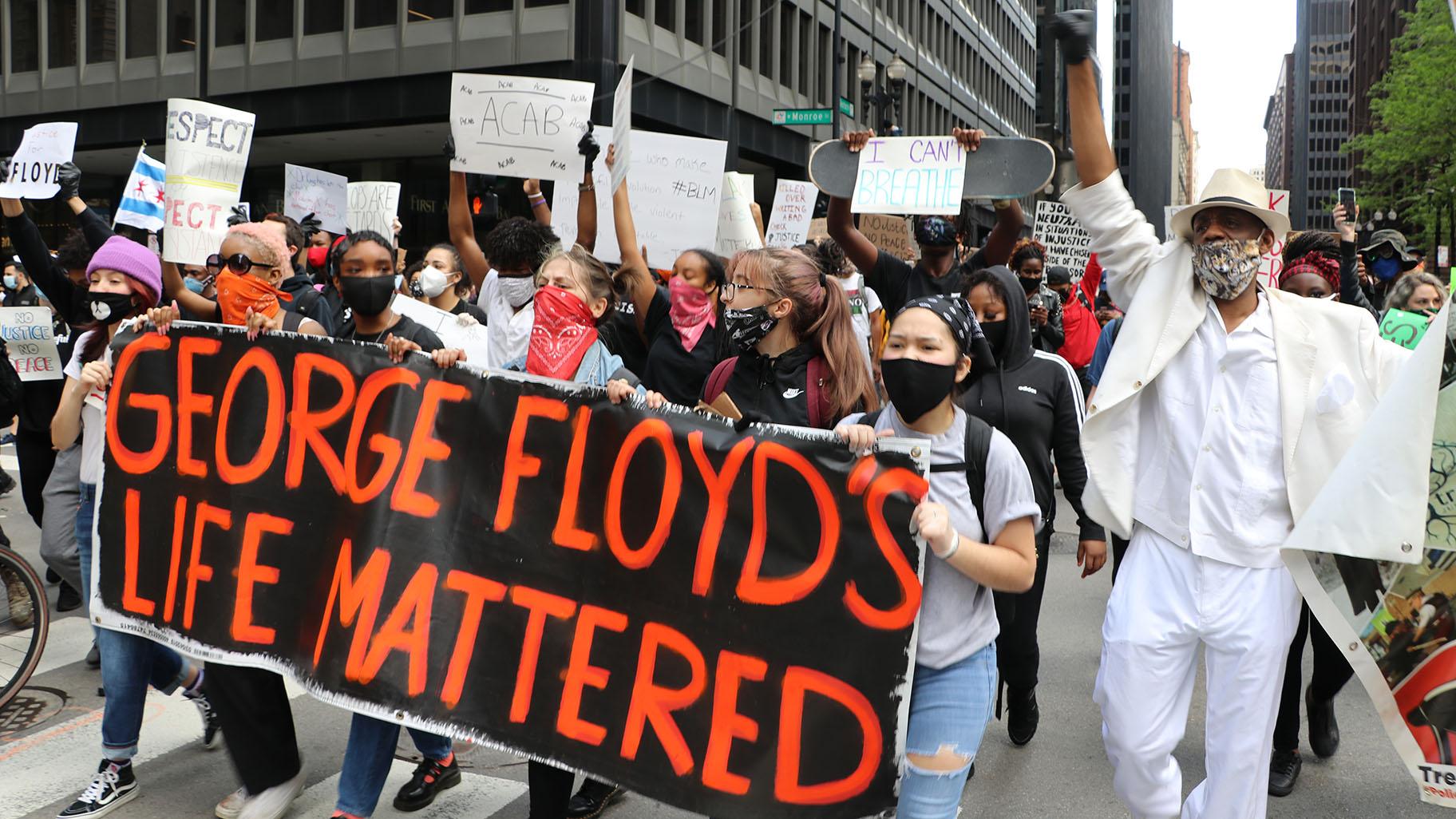 Protesters march along Dearborn Street while holding a sign honoring George Floyd on Saturday, May 30, 2020. Eric Russell, right, an activist with the Tree of Life Justice League, joins them. He also spoke at the protest. (Evan Garcia / WTTW News)

Even as protests spread across the country after Floyd’s death, which was captured on video, the department’s top brass was “under prepared and ill-equipped” when marches and demonstrations began in Chicago, according to the report.

In part, police officials were caught off-guard late May 29 when “protest activity gave way to unrest, including episodic lawlessness” because city officials were confident that Chicago would remain peaceful despite “the spread of increasingly volatile events nationwide” because the 2015 release of the video of the murder of Laquan McDonald by a police officer did not trigger violence or unrest, according to the report.

“CPD’s response that night was marked by poor coordination, inconsistency and confusion,” according to the report.

Things did not improve during the next several days, during which Lightfoot raised all but one of the bridges into and out of downtown for the first time in modern Chicago history while imposing a curfew and calling out the Illinois National Guard for the first time since the late 1960s.

“The next several days found CPD outflanked, under-equipped, and unprepared to respond to the scale of the protests and unrest with which they were met in the downtown area and across Chicago’s neighborhoods,” according to the report.

The police department’s ability to arrest large groups of people broke down almost immediately, according to the report.

The department’s record keeping was so shoddy that the Office of the Inspector General had to conduct its own analysis to determine that a total of 1,519 arrests related to the protests or unrest were made between May 29 and June 7, including 1,000 on May 30 and May 31.

However, Brown acknowledged that some people who had been arrested waited hours to be processed — in part because officers feared for their own lives.

Officers Failed to Document Use of Force: Watchdog 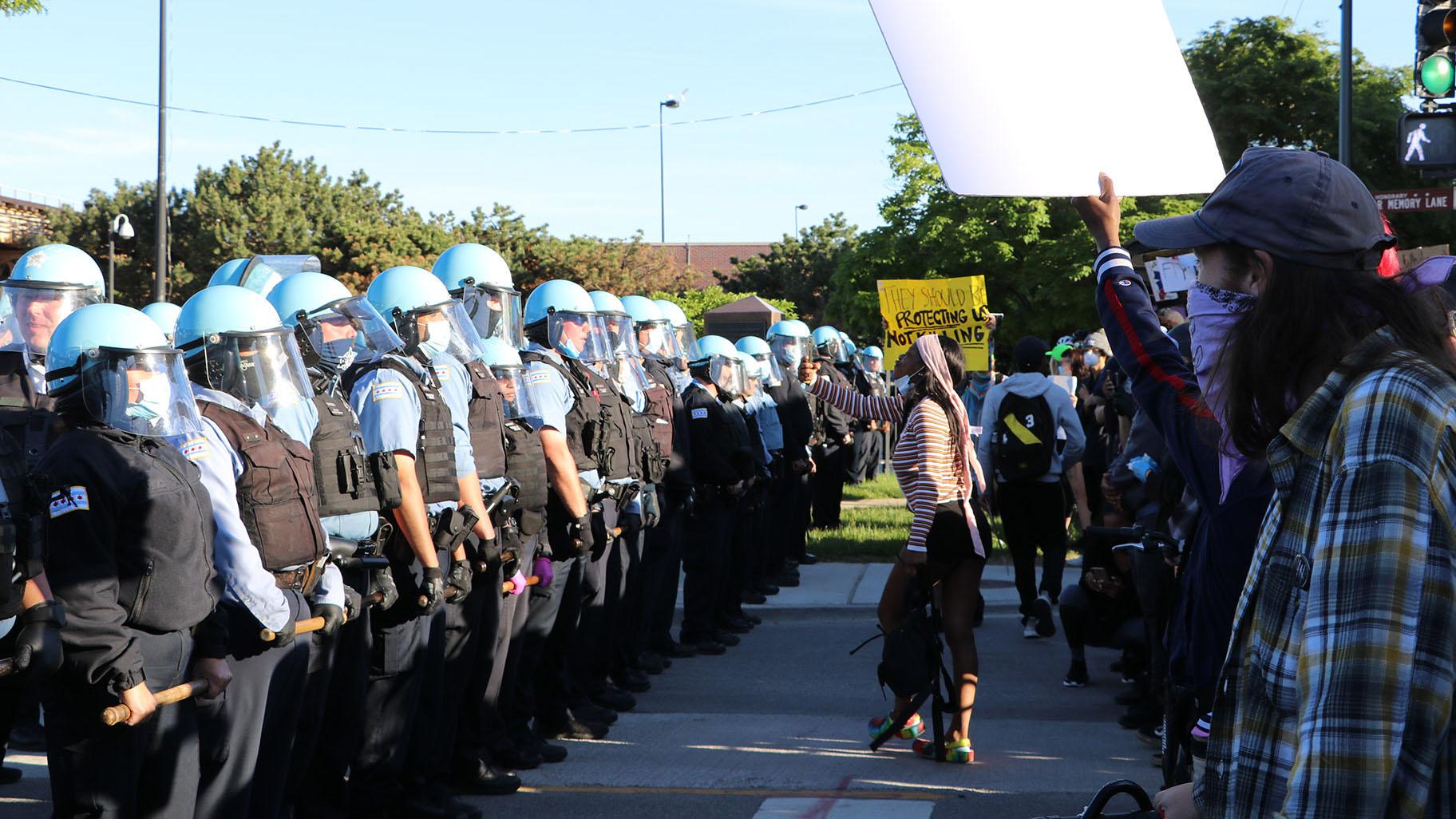 At the same time, officers did not “appropriately document” — as required by department rules — when they used force during the protests, according to the report.

“CPD underreported uses of baton strikes and manual strikes, further resulting in an inadequate record of severe and potentially” unjustified use of force incidents, according to the report.

That was due in part because of the chaotic way the police department was handling the mass arrests — and because the officers charged with supervising officers and investigating misconduct were sent to police the protests and stop the unrest.

“Protesters reported seeing and experiencing apparently indiscriminate uses of force by CPD members,” according to the report. “They described seeing CPD members tackle, punch, and use batons to strike peaceful protesters in the head and neck. Some of these observations are supported by [body-worn camera] footage from that day.”

There is also evidence that a police officer knocked to the ground a person standing astride a bicycle after they attempted to film an arrest, according to the report.

Brown disputes the report’s finding that deploying members of the department’s Force Review Division and the Bureau of Internal Affairs to respond to the protests and unrest “led to a breakdown in oversight.”

“The department took steps to keep these members back from the front line of interactions with the public,” Brown wrote, adding that procedures to address potential conflicts of interest were in place.

In addition, efforts to hold officers accountable for misconduct during the unrest and protests are complicated by the fact that officers were sent to the frontlines of the protests and unrest without a body-worn camera, as required by police department rules.

“CPD members did not consistently capture critical incidents on [body-worn cameras] as required by its policy or in a manner that would ensure transparency and accountability,” according to the watchdog’s report.

Other officers obscured identifying information on their uniforms during the protest response, according to the report.

“It may have been impossible, therefore, to identify the perpetrators of any alleged misconduct,” according to the report.

Those actions “profoundly compromised the investigation of allegations of misconduct,” according to the report.

During its probe, the inspector general’s office “uncovered some evidence suggestive of possible misconduct by individual city actors” and referred to the appropriate agency for investigation, according to the report.

“Even as new challenges arise, CPD and the city will be dealing with the negative repercussions of these shortcomings for some time,” according to the report. “Missing reports and videos may limit or preclude prosecution of some arrestees as well as accountability for individual officers and may compromise CPD and the city’s position in investigations or litigation.”