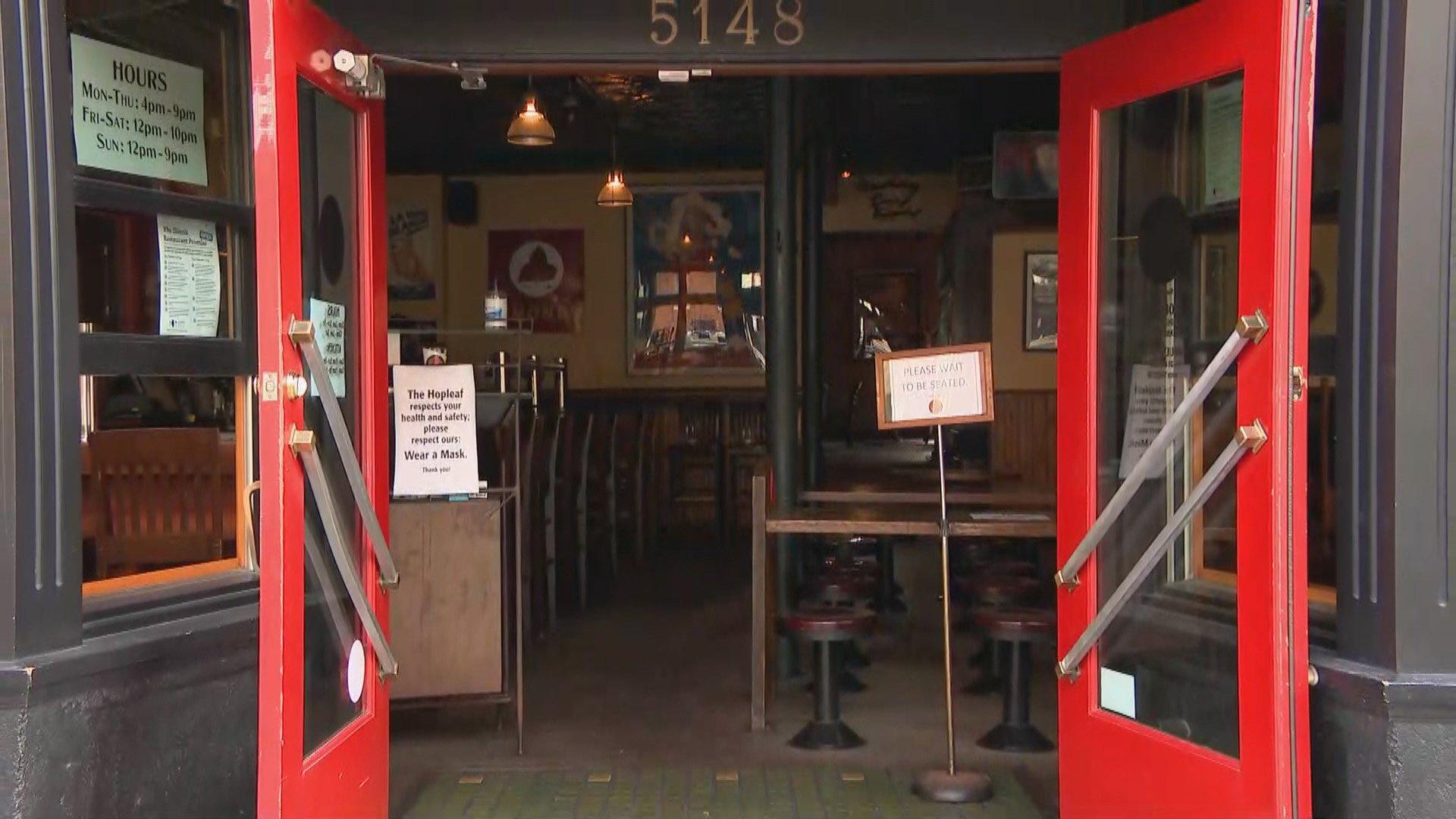 Restaurant and bar restrictions aimed at curbing the spread of COVID-19 have resulted in empty tables across Illinois and some temporary closures, including at Andersonville pub Hopleaf. (WTTW News)

Gov. J.B. Pritzker said Friday the toughest restrictions in place to stop the spread of the coronavirus will lift in three Illinois regions — but will stay in place in Chicago and suburban Cook County.

Pritzker said he acted after it became clear that Illinois did not see a surge in COVID-19 cases after the Christmas and New Year’s holidays.

Most Illinois regions “are on track” to see loosened restrictions in the coming days, Pritzker said.

“It is incredibly important for Illinoisans not to let their guard down,” Pritzker said, especially since a more transmissible variant of COVID-19 was discovered in Chicago.

Imposed on Nov. 20, the strictest restrictions, known as Tier 3 by state officials, suspended indoor dining and drinking and reduced the number of people who can be inside a business at one time. The rules also closed theaters, museums and other institutions.

The toughest restrictions will lift in the northern Illinois area around Rockford (Region 1), in north central Illinois including LaSalle County and Galesburg (Region 2) and in far southern Illinois, including Carbondale (Region 5).

Those regions, now under Tier 2 restrictions, have had a positivity rate of less than 12% for at least three consecutive days, declining COVID-19 hospitalizations for seven out of the past 10 days and more than 20% of its ICU and hospital beds available.

Casinos and museums will be allowed to reopen in those three regions at 8 a.m. Saturday with capacity limits of no more than 25%. Restrictions now in place in those regions limit social gatherings to no more than 10 people, both indoors and outdoors, according to the guidelines.

Group recreation activity is also now allowed, but classes are limited to 25 guests or 25% of overall room capacity both indoors and outdoors. In addition, youth and recreational sports may resume in accordance with state health guidance, Pritzker said.

Indoor dining and drinking remain suspended in all regions of Illinois.

In both Chicago and Cook County, there are not enough medical/surgical beds available to meet the requirements to ease restrictions, according to data from the Illinois Department of Public Health.

Pritzker said Friday that he spoke to Mayor Lori Lightfoot about her request to allow indoor dining and drinking in Chicago “as soon as possible.”

However, Chicago “doesn’t quite meet the metrics” for restrictions to be loosened, although things are “trending in the right direction,” Pritzker said, adding that he would not make an exception for any region or Chicago.

The governor did give restaurant and bar owners a glimmer of hope on Friday, however, by announcing that regions under Tier 1 restrictions would be allowed to permit indoor dining and drinking at a limited capacity of no more than 25 people or 25% of overall room capacity with tables of no more than four people kept 6 feet away from each other. In addition, bars must serve food, according to the rules.

“As the pandemic has evolved, so has the state’s response,” according to a statement from the governor’s office. “The updated plan accounts for months of continued deliberations by public health officials as well as the rollout of the first COVID-19 vaccines.”

Regions can move from Tier 2 restrictions to Tier 1 restrictions after recording a test positivity rate of less than 8% for three consecutive days, based on the seven-day rolling average, as well as no increase in COVID-19 hospitalizations for seven out of the past 10 days and more than 20% of its ICU and hospital beds available, according to the rules announced Friday by Pritzker.

Previously, state rules only allowed indoor dining and drinking in what the state calls Phase 4 of its reopening plan. To return to Phase 4, a region must average a test positivity rate of 6.5% or less, based on the seven-day rolling average, as well as no increase in COVID-19 hospitalizations for seven out of the past 10 days and more than 20% of its ICU and hospital beds available, according to the rules announced Friday by Pritzker.

Illinois health officials reported 6,642 new confirmed and probable cases of the virus across the state Friday, and 123 additional deaths.

In Chicago, the seven-day test positivity rate is 9.5%, and in suburban Cook County it is 9.3%, according to IDPH regional data.

As of Thursday night, 3,446 people in Illinois were reported to be in the hospital with COVID-19, according to IDPH. Of those, 712 patients were in intensive care units and 386 patients with COVID-19 were on ventilators, IDPH reports.