Trump Expected to Flex Pardon Powers on Way Out Door

Video: Presidential pardon power. A “Chicago Tonight” discussion with Aziz Huq, professor of law at the University of Chicago; and Michael Allen, associate professor of history at Northwestern University.

WASHINGTON (AP) — Advocates and lawyers anticipate a flurry of clemency action from President Donald Trump in the coming weeks that could test the limits of presidential pardon power.

Trump is said to be considering a slew of pardons and commutations before he leaves office, including potentially members of his family, former aides and even himself. While it is not unusual for presidents to sign controversial pardons on their way out the door, Trump has made clear that he has no qualms about intervening in the cases of friends and allies whom he believes have been treated unfairly, including his former national security adviser Michael Flynn.

The list of potential candidates is long and colorful: Trump’s former campaign chairman, Paul Manafort, imprisoned for financial crimes as part of the Russia investigation; George Papadopoulos, who pleaded guilty to lying to the FBI, just like Flynn; Joseph Maldonado-Passage, aka “Joe Exotic,” who starred in the Netflix series “Tiger King”; and former contractors convicted in a Baghdad firefight that killed more than a dozen civilians, including women and children.

Trump, long worried about potential legal exposure after he leaves office, has expressed worry to confidants in recent weeks that he, his family or his business might be targeted by President-elect Joe Biden’s Justice Department, although Biden has made clear he won’t be part of any such decisions.

Nonetheless, Trump has had informal conversations with allies about how he might be able to protect his family, though he has not taken any steps to do so. His adult children haven’t requested pardons nor do they feel they need them, according to people familiar with the discussions who spoke on condition of anonymity to discuss private matters.

Trump has also discussed potentially shielding himself, The New York Times first reported. In a video posted on Facebook on Wednesday, he made a glancing reference to his potential vulnerabilities.

“Now I hear that these same people that failed to get me in Washington have sent every piece of information to New York so that they can try to get me there,” he said.

The speculation prompted a slew of preemptive pushback from critics.

“Typically, if someone is being given a pardon it suggests they may have committed a crime. That’s not something I would want to have associated with my family,” said Republican Sen. Mitt Romney of Utah, a frequent critic of Trump.

Senate Democratic leader Chuck Schumer decried the notion of the president asking staff whether he can issue preemptive pardons for himself, his family members and his attorney, Rudy Giuliani, with whom Trump has discussed potential action.

“There’s a simple answer: No. No, Mr. President, that would be a gross abuse of the presidential pardon authority,” Schumer said.

Presidents enjoy expansive pardon powers when it comes to federal crimes. That includes granting clemency to people who have not yet been charged, as President Gerald Ford did in 1974 when he pardoned his predecessor, Richard Nixon.

But presidents cannot issue pardons for state crimes nor can they sidestep the law by pardoning people for crimes that have not yet occurred, according to legal experts. It remains unclear whether a president has the power to pardon himself. No one has tried.

A decades-old opinion by the Justice Department’s Office of Legal Counsel suggests presidents cannot pardon themselves because it would require them to serve as judges in their own cases, but it also posits that a president could declare himself unable to serve, transfer power to his vice president and receive a pardon that way.

But Trump’s position is notable given the sheer number of former aides and allies who have been imprisoned, indicted or are facing legal jeopardy.

They include Manafort, Manafort deputy Rick Gates, the president’s longtime friend and adviser Roger Stone, his former chief strategist Steve Bannon and his former lawyer Michael Cohen. Stone and Flynn are among those Trump already has granted clemency. 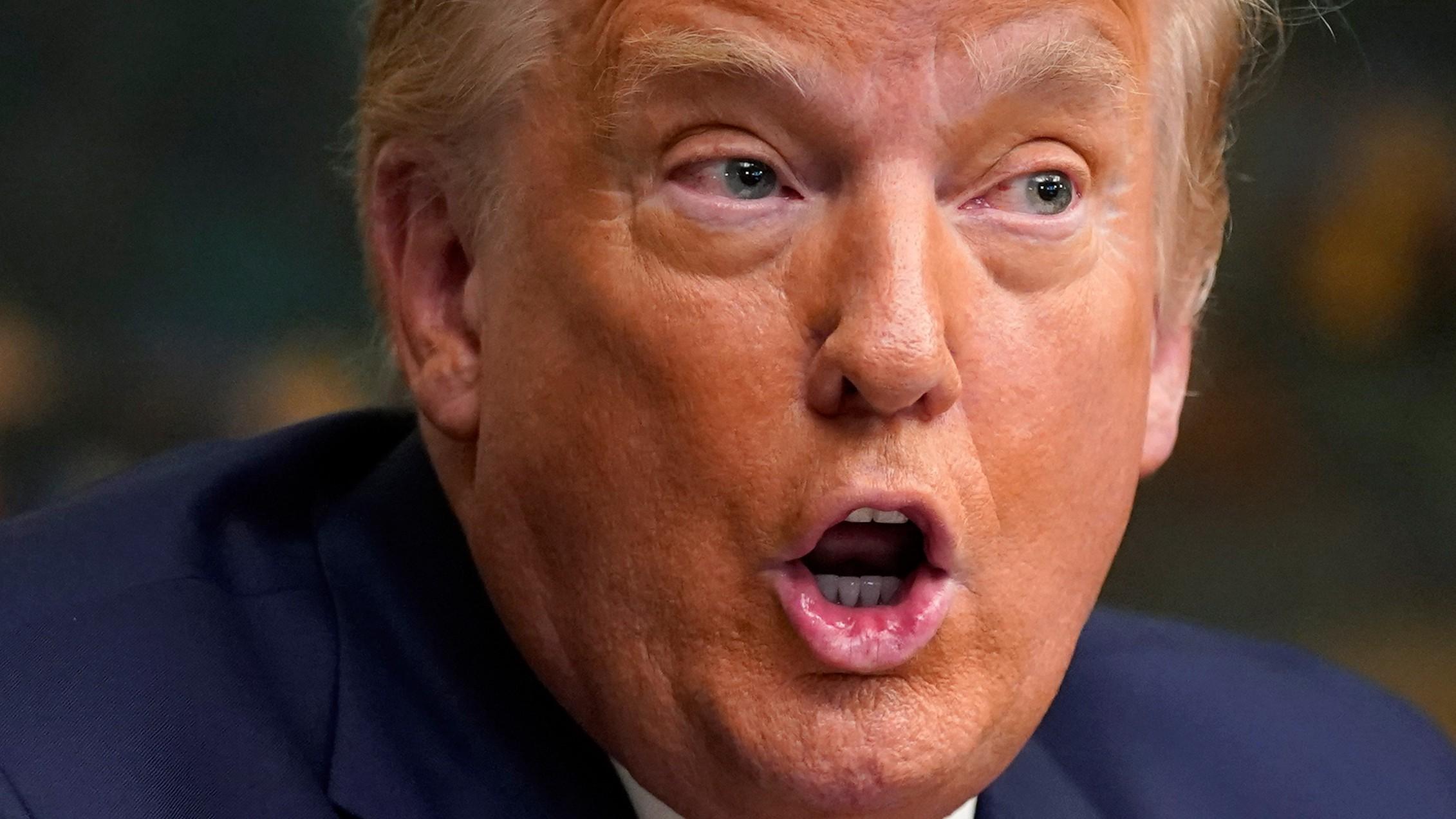 In this Nov. 26, 2020, photo, President Donald Trump speaks with reporters after participating in a video teleconference call with members of the military on Thanksgiving, at the White House in Washington. (AP Photo / Patrick Semansky)

In most administrations, 99% of those who receive pardons are people the public never hears of, while the remaining 1% receive 99% of the attention, said Michigan State University law professor Brian Kalt. But Trump’s interest in celebrities and high-profile figures has thrown those percentages off-kilter.

“You can see the appeal of the pardon power to someone like him,” Kalt said. “It’s the one thing where the president says it and it gets done. He doesn’t have to deal with the ‘deep state.’ He doesn’t have to go through congressional oversight or judicial review.”

In previous administrations, pardons have gone through a formal review process at the Justice Department in which lawyers carefully examine cases before making recommendations to the White House. Trump has largely sidestepped that process — instead relying on a more haphazard approach that has favored candidates whose cases have resonated with him personally or that have been championed by celebrities like Kim Kardashian West.

As the results of last month’s election have become clear, those seeking pardons before Trump leaves office have redoubled their efforts to garner White House attention, leaning on high-profile Washington lawyers, re-upping PR efforts and, in the case of Papadopoulos, writing a book, appearing on Fox News and speaking to news outlets.

“I simply want the facts to get out about exactly what happened in my situation and for the American public to determine its logical conclusion. Which I hope is a pardon. I do not expect it, but I would be honored to accept one,” he told The Associated Press.

Giuliani, meanwhile, has spoken directly with the president about a pardon. The two men have had preliminary conversations about the topic, but it is unclear how serious those have been.
Beyond the bold-face names, however, are the regular people, behind bars, who have tried to make the case that they were unfairly sentenced or deserve a second chance.

“So many people are crying out for help,” said Alice Marie Johnson, who had been serving a life sentence without parole until Trump commuted her sentence in 2018 after her case was championed by Kardashian West. Trump then featured Johnson’s story in a Super Bowl ad and pardoned her during this year’s Republican National Convention.

Johnson, who has already successfully lobbied the president to take action on the cases of several other people, said she again met with Trump at the White House several weeks ago to present additional cases, all for people with “just incredible rehabilitation and incredible prison records.”
“Personally, I’m hoping to see people home before Christmas,” she said. “Families around the country are praying for a Christmas miracle.”

The White House did not respond to questions and press secretary Kayleigh McEnany said she’d “heard no mention of any pardons in any conversations I’ve had in the White House” other than for Flynn.

Trump has so far used his clemency power less often than any president in modern history, according to Justice Department data compiled by the Pew Research Center.

It shows he has granted clemency 44 times, less than any other president since at least William McKinley.

“You’ve got over 13,000 petitions filed by all these people who followed the rules,” submitting applications, having people write letters on their behalf and waiting years for their cases to be processed, said Mark Osler, a former federal prosecutor and professor at the University of St. Thomas. He has participated in several meetings at the White House during Trump’s term as officials brainstormed potential changes to the formal clemency process.

“For those people that should be free,” he said, Trump’s friends-and-family approach to pardons is “a deep and real tragedy.”