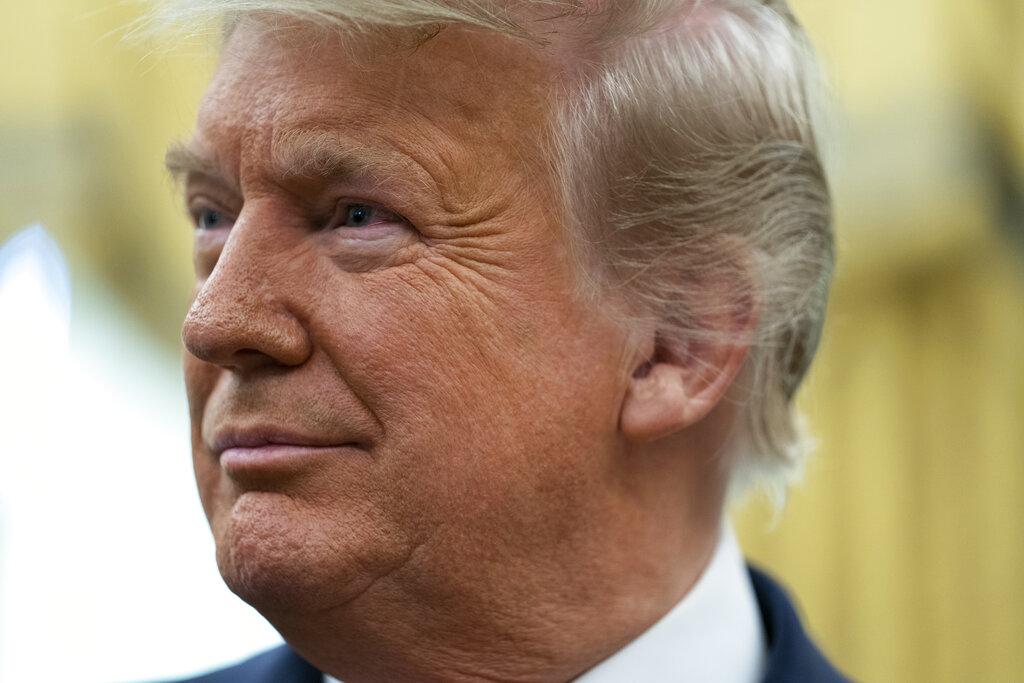 President Donald Trump listens during a ceremony to present the Presidential Medal of Freedom to former football coach Lou Holtz, in the Oval Office of the White House, Thursday, Dec. 3, 2020, in Washington. (AP Photo / Evan Vucci)

ATLANTA (AP) — President Donald Trump fruitlessly pressed Georgia’s governor on Saturday to call a special legislative session aimed at overturning the presidential election results in that state as Trump’s fixation with his defeat overshadowed his party’s campaign to save its majority in the Senate.

Trump and Georgia Gov. Brian Kemp spoke by phone hours before Trump was to appear at a rally in Valdosta, Georgia, where Republicans hoped the president would dedicate his energy to imploring their supporters to vote in two runoff elections Jan. 5.

But it remained at open question whether his first postelection political rally would be a mission to help his party or himself.

Hours before the event, Trump asked Kemp in the phone call to order the legislative session; the governor refused, according to a senior government official in Georgia with knowledge of the call who was not authorized to discuss the private conversation and spoke on the condition of anonymity. A person close to the White House who was briefed on the matter verified that account of the call.

Trump’s request was first reported by The Washington Post.

According to a tweet from the governor, Trump also asked him to order an audit of absentee ballots from the presidential race in his state, a step Kemp is not empowered to take because he has no authority to interfere in the electoral process on Trump’s behalf.

Trump’s personal contact with the governor demonstrated he is intent on amplifying his conspiratorial and debunked theories of electoral fraud even as Georgia Republicans want him to turn his focus to the Jan. 5 runoff elections and encourage their supporters to get out and vote.

They’re worried that Trump is stoking so much suspicion about Georgia elections that voters will think the system is rigged and decide to sit out the two Jan. 5 races, where Sens. David Perdue and Kelly Loeffler are trying to withstand Democrats Jon Ossoff and Raphael Warnock, respectively, and keep the Senate under Republican control.

In his tweet, Kemp said: “As I told the President this morning, I’ve publicly called for a signature audit three times (11/20, 11/24, 12/3) to restore confidence in our election process and to ensure that only legal votes are counted in Georgia.”

But a recommendation is all he can do about the electoral process. The governor does not have the authority to order an audit in the race. Moreover, the race in Georgia was certified for President-elect Joe Biden and affirmed by the state’s Republican election officials as a fairly conducted and counted vote, with none of the systemic errors Trump alleges.

The president’s aides publicly scoffed at the idea that Trump might do anything at the evening Valdosta rally other than encourage Republicans to back Perdue and Loeffler.

But after two pro-Trump lawyers this past week questioned whether voting again is even worth it — in echoes of the president’s baseless accusations of widespread voter fraud — even Vice President Mike Pence betrayed concerns that the Republican coalition could crack under the force of Trump’s grievances.

“I know we’ve all got our doubts about the last election, and I hear some of you saying, ‘Just don’t vote,’” Pence said Friday while campaigning with Perdue in Savannah. “If you don’t vote, they win.”

Republicans need one more seat for a Senate majority. Democrats need a Georgia sweep to force a 50-50 Senate and position Vice President-elect Kamala Harris as the tiebreaking majority vote.

Few Republicans in Washington or Georgia believe wide swaths of the electorate in this newfound battleground would opt out of voting because of Trump’s false claims or his denigration of the Georgia governor and secretary of state for certifying Biden’s victory in the state.

The risk for the GOP is that it wouldn’t take much of a drop-off to matter if the runoffs are as close as the presidential contest: Biden won Georgia by about 12,500 votes out of 5 million cast. There’s enough noise to explain why Pence felt the need to confront the matter head on after two Trump loyalists floated the idea of the president’s supporters bailing on Perdue and Loeffler.

“I would encourage all Georgians to make it known that you will not vote at all until your vote is secure — and I mean that regardless of party,” lawyer Sidney Powell said this past week at a suburban Atlanta “Stop the Steal” rally.

Trump’s team has recently tried to dissociate itself from the pair but only after they were given a prominent platform in the flailing effort to overturn the presidential election results. Moreover, Trump personal lawyer Rudy Giuliani returned Thursday to the Georgia Capitol for a marathon hearing that featured yet another airing of disproved claims.

Trump has been the source of party angst with his recent declarations that Kemp is “hapless” and Secretary of State Brad Raffensperger is an “enemy of the people” because they didn’t block Biden’s Georgia victory. State law gives them no avenue to do so.

It’s resonated with voters such as Barry Mann, a 61-year-old business owner who came to hear Pence in Savannah. Mann hasn’t decided whether he’ll vote for his senators a second time.

“I think there’s some issues with our election and more investigation needs to be done,” Mann said, adding that he doesn’t think Perdue and Loeffler have done enough to support Trump’s efforts to overturn the results. “I want see what happens between now and January,” Mann said.

A third vote count, this one requested by the president’s reelection campaign, was nearing completion. Raffensperger could certify the election again as soon as Saturday; the result is not expected to change.

Tim Phillips, president of the conservative Americans for Prosperity, played down the idea that there are enough voters like Mann to cost Perdue and Loeffler. Phillips’ group has about 200 field workers canvassing across Georgia.

After his own door-knocking shift Friday, Phillips described the GOP’s pool of potential voters, especially in rural and small-town areas, as largely “voters who aren’t so much Republicans or even conservatives, but they love Trump.” That loyalty, he said, allows them to “hear two different messages” from Trump.

“He may say some things about the governor or other people, but the dominant message is that he’s down here for Perdue and Loeffler,” Phillips said. That should be “enormously beneficial.”