Multiple Storm Systems May Impact Your Thanksgiving Plans This Week 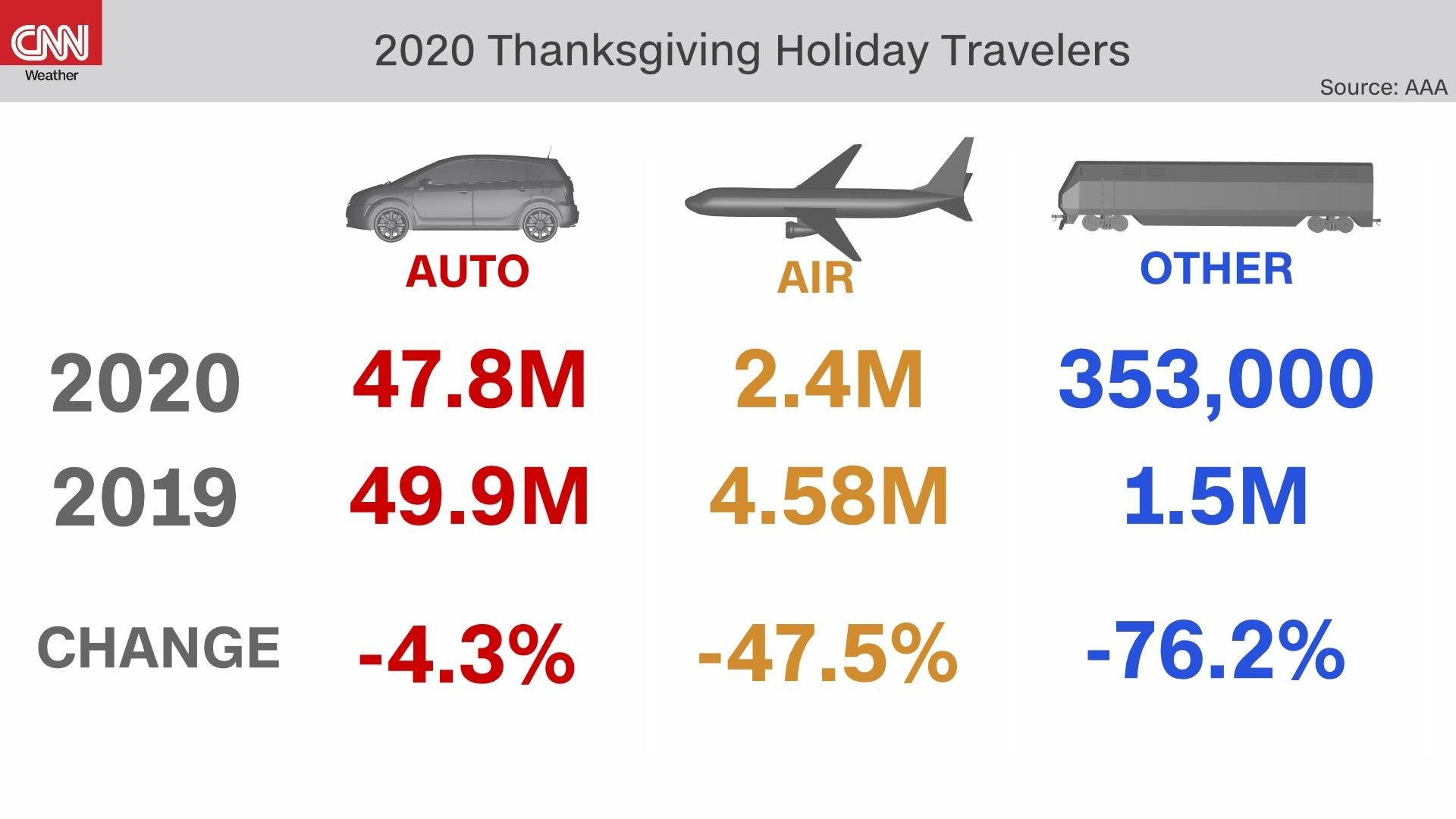 Regardless of the mode of transportation, any travel away from your home this year is risky. (Credit: CNN Weather)

(CNN) — Typically, Thanksgiving is deemed the beginning of the celebratory holiday season, in which millions of people travel to see their families and close friends. However, as has been the trend with the year 2020, this holiday season will be different as the nation adjusts to the worsening COVID-19 pandemic.

“As cases continue to increase rapidly across the United States, the safest way to celebrate Thanksgiving is to celebrate at home with the people you live with,” the Centers for Disease Control and Prevention said Friday after updating its guidelines on holiday celebrations and small gatherings.

Due to the warnings from health and government officials, AAA is expecting a drop in travel of at least 10%, which would be the largest one-year reduction in travel since the Great Recession in 2008.

Regardless of the mode of transportation, any travel away from your home this year is risky.

“Travel may increase your chance of getting and spreading COVID-19. Postponing travel and staying home is the best way to protect yourself and others this year,” the CDC warns.

For those heeding the health warnings and planning a virtual or outdoor celebration, the next question becomes, will Mother Nature cooperate with your holiday plans?

Rounding out the weekend

Sunday morning, the main focus will be a line of showers stretching from Detroit to Little Rock, Arkansas. Rain is the main concern south of Toledo, Ohio. For those north of that point, there will be a rain/snow mix.

By Sunday afternoon, the showers shift east with the main focus between Syracuse, New York, and Nashville.

Sunday evening, the showers will be impacting areas from Burlington, Vermont, down to Atlanta.

Monday, the main focus for the showers will be from Caribou, Maine, to Raleigh, North Carolina.

The good news is, overall rain and snow accumulations are expected to be on the low side. Through Monday, rainfall should peak at one inch or less in most places.

Snowfall accumulation will be mainly one inch or less since it will be mixed with rain in so many locations. The higher elevations of the Green and White Mountains as well as northern Maine could get a little more snow, with 2-4 inches possible.

Floridians will also want to keep an eye out for a few showers, mainly in the eastern half of the state. Jacksonville, Orlando, and Miami have slim rain chances on Sunday before drying out for the rest of the upcoming week.

The eastern US isn’t the only area that will be dealing with inclement weather as we finish out the weekend.

“On Sunday, multiple fronts will move into the Pacific Northwest. The systems will produce rain over parts of the Northwest on Sunday afternoon,” the Weather Prediction Center says. “As the precipitation moves inland, higher elevation snow and lower elevation rain will develop over the interior of the Northwest.”

Areas of the central Rockies and southern plains will also see the chance for showers later Sunday into Monday, including Salt Lake City.

Next storm moves in

By Tuesday and Wednesday the system that was in the Pacific Northwest over the weekend will move into the Central Plains and Midwest.

But the Pacific Northwest will be looking at inclement weather again, as numerous disturbances move across the region early next week through the holiday period.

November is often the gloomiest time of year in the Northwest, and the region will live up to those soggy expectations this week. Seattle and Portland, Oregon, both have rain chances in the forecast every day from Sunday through Wednesday. 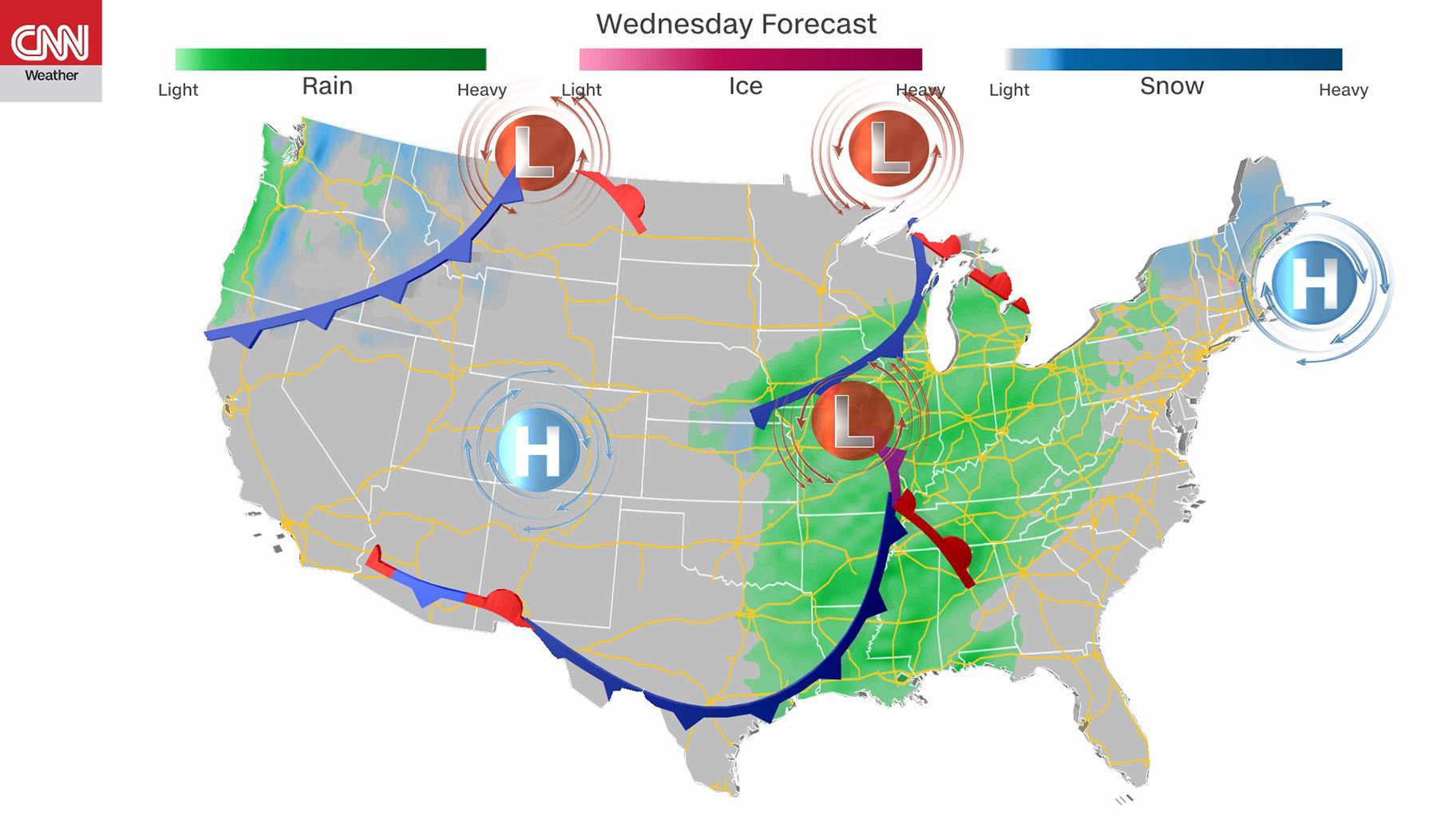 On Thanksgiving eve, overall rain and snow accumulations are expected to be on the low side. (Credit: CNN)

Denver will also see some showers Tuesday, but it will mostly be in the form of snow. Temperatures there will see a big drop from highs around 60 Monday down to the mid 40s on Tuesday.

For the Southern Plains, it’s not just rain but also thunderstorms expected in Oklahoma City, Dallas, and Wichita, Kansas, on Tuesday.

By Wednesday the same system will be focused from the Great Lakes down to the Gulf Coast. Likely the biggest impacts will be for cities like Cleveland, Chicago, Atlanta, Memphis, Tennessee, and Little Rock, Arkansas. The heaviest rain will be from Indianapolis down to Little Rock, where 1-3 inches is possible. Interstates 65, 70, and 75 will likely have heavy rain at times.

The Macy's Thanksgiving Day Parade is still scheduled to begin at 9:00 am in New York City and while much of the show this year is expected to be a “made-for-TV” performance, the gigantic balloons and decorative floats will still be featured.

For those who are locally participating in the parade, temperatures are forecast to hover around 50 degrees through the early morning hours with a high temperature forecast in the mid-50s. There is also a chance for scattered showers that morning, but winds are expected to remain light, between 5 and 10 mph.

The Macy’s Thanksgiving Day Parade has weathered much colder, windier, and wetter conditions in the past, so this year’s weather forecast should not be much of a concern for the live performances.

Will Mother Nature cooperate with your outdoor Thanksgiving? 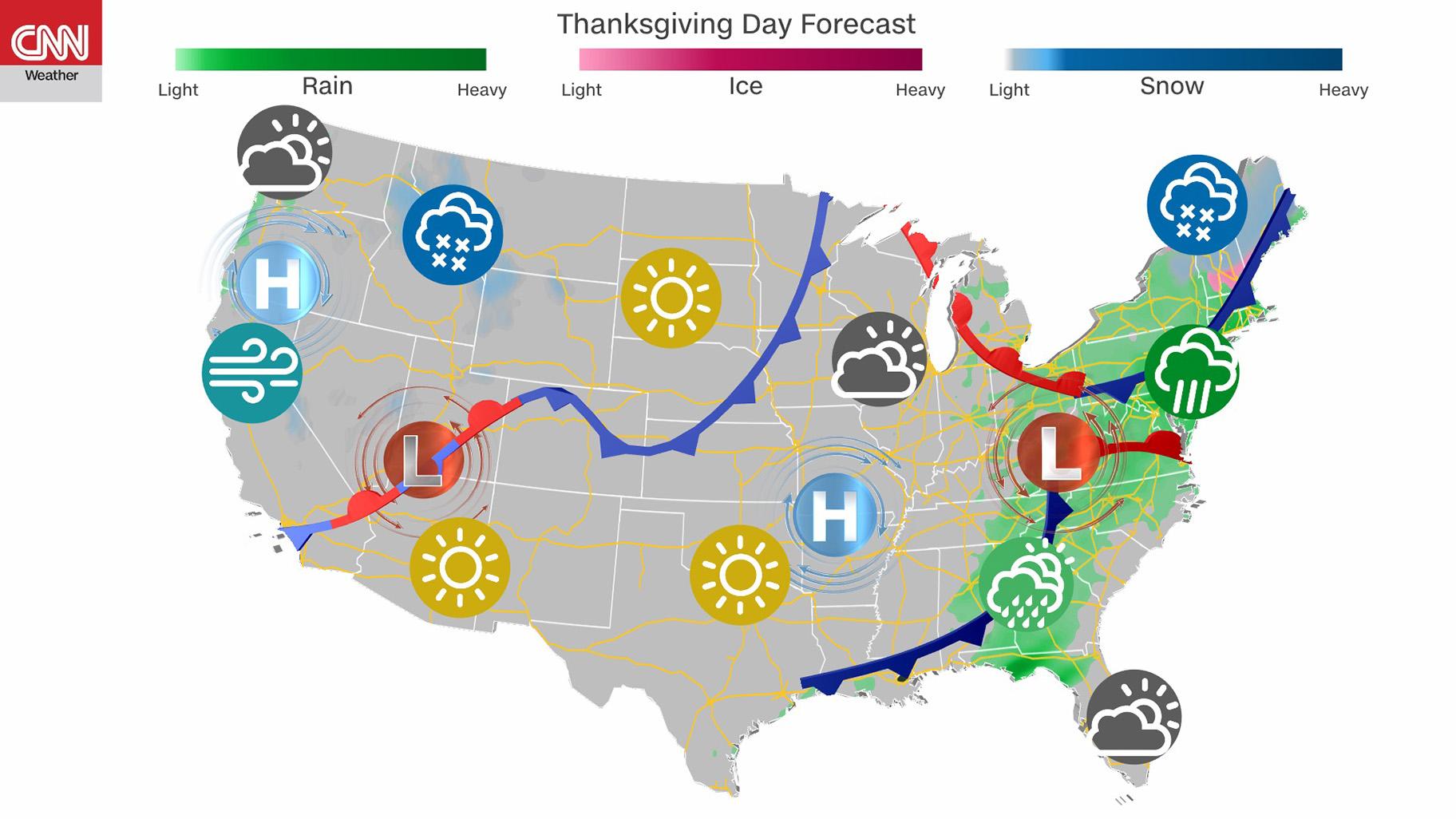 Thanksgiving weather forecast: November is often the gloomiest time of year in the Northwest, and the region will live up to those soggy expectations this week. (Credit: CNN)

The CDC said a small outdoor gathering is permitted, but will the weather cooperate? In many areas, the answer is yes.

The Upper Midwest and desert Southwest will be two of the most promising locations for dry weather.

Minneapolis, Kansas City, and Green Bay, Wisconsin, will all have a mild, dry Thanksgiving. Even Chicago, which will start out cloudy, ends up very sunny with temperatures several degrees above normal by the afternoon.

It’s a different story from Maine to Florida, where rain is in the forecast on Thursday. But it won’t be a total washout and temperatures will be about 5-15 degrees above normal.

The best chances for a white Thanksgiving are in Maine, where there will be “an inch or more of snow on the ground 61 percent of the time on Thanksgiving morning,” the National Weather Service office in Caribou said. As of now, Caribou, Bangor, and Augusta all have a rain/snow mix forecast for Thursday.

In those cities, along with western locations such as Denver and Cheyenne, Wyoming, which also have a chance of snow Thursday, it may be best to stay inside and watch the Macy’s Thanksgiving Day Parade from the comfort of your warm couch. 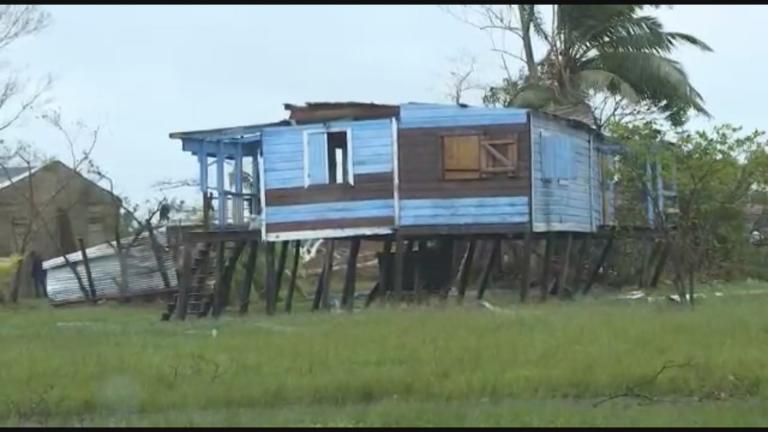 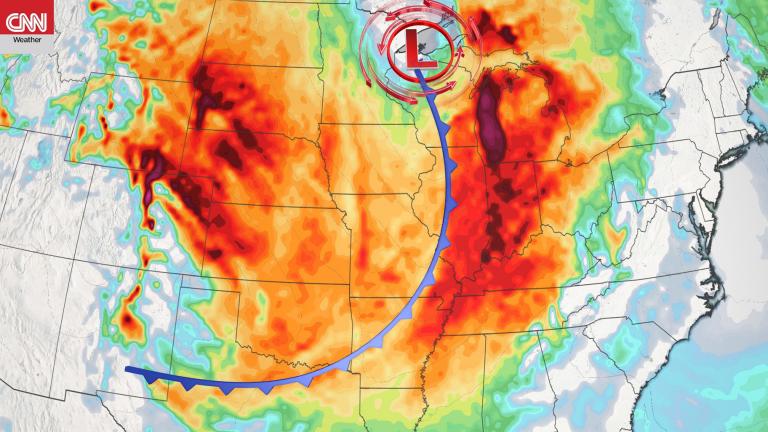 Rain, Snow, Wind and Even Tornadoes Possible This Weekend 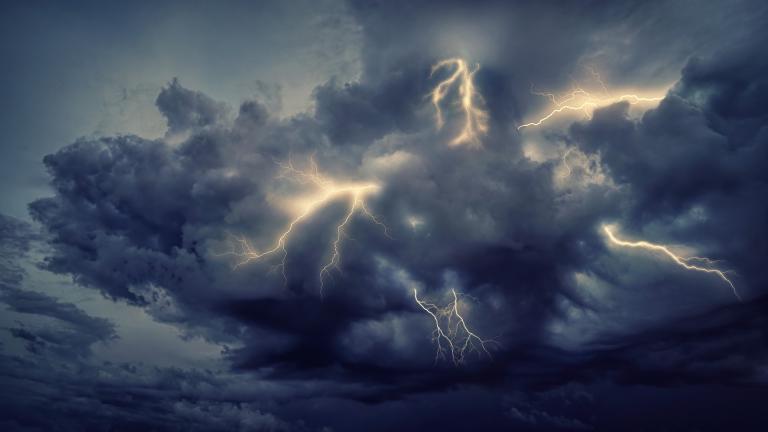