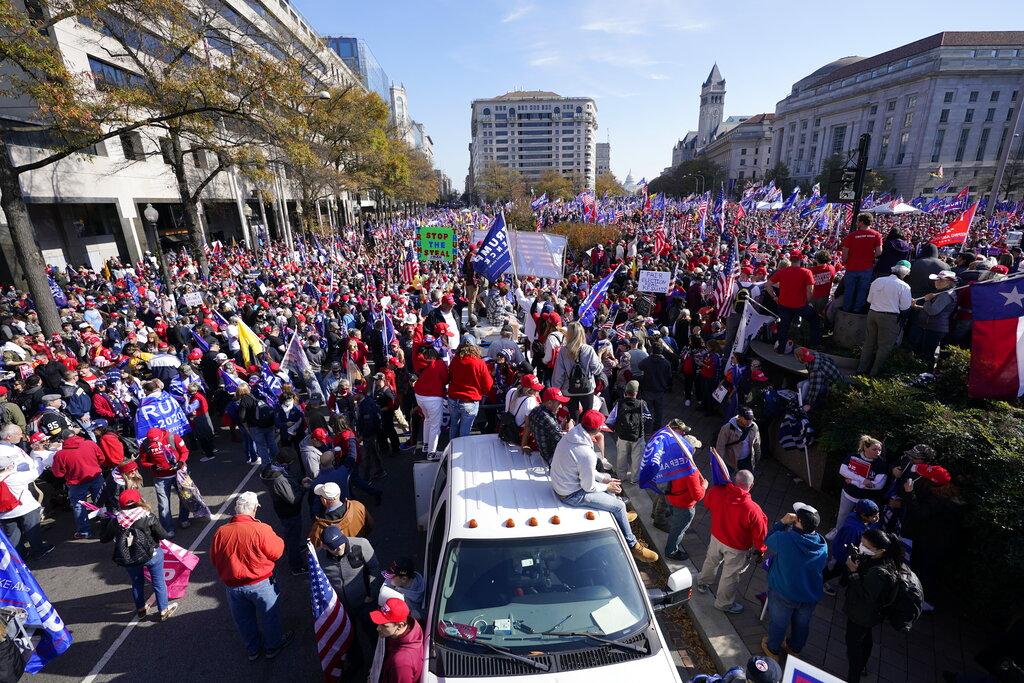 WASHINGTON (AP) — After several thousand supporters of President Donald Trump protested the election results and marched to the Supreme Court, nighttime clashes with counterdemonstrators led to fistfights, at least one stabbing and more than 20 arrests.

Several other cities on Saturday also saw gatherings of Trump supporters unwilling to accept Democrat Joe Biden’s Electoral College and popular vote victory as legitimate. Cries of “Stop the Steal” and “Count Every Vote” rang out despite a lack of evidence of voter fraud or other problems that could reverse the result.

The demonstrations in the nation’s capital went from tense to violent during the night and early Sunday. Videos posted on social media showed fights, projectiles and clubs as Trump backers sparred with those demanding they take their MAGA hats and banners and leave. A variety of charges, including assault and weapons possession, were filed against those arrested, officials said. Two police officers were injured and several firearms were recovered by police.

Trump himself had given an approving nod to the gathering Saturday morning by sending his motorcade through streets lined with supporters before rolling on to his Virginia golf club. People chanted “USA, USA” and “four more years,” and many carried American flags and signs to show their displeasure with the vote tally and insistence that, as Trump has baselessly asserted, fraud was the reason.

“I just want to keep up his spirits and let him know we support him,” said one loyalist, Anthony Whittaker of Winchester, Virginia. He was outside the Supreme Court, where a few thousand assembled after a march along Pennsylvania Avenue from Freedom Plaza, near the White House.

A broad coalition of top government and industry officials has declared that the Nov. 3 voting and the following count unfolded smoothly with no more than the usual minor hiccups — “the most secure in American history,” they said, repudiating Trump’s efforts to undermine the integrity of the contest.

In Delray Beach, Florida, several hundred people marched, some carrying signs reading “Count every vote” and “We cannot live under a Marxist government.” In Lansing, Michigan, protesters gathered at the Capitol to hear speakers cast doubt on results that showed Biden winning the state by more than 140,000 votes. Phoenix police estimated 1,500 people gathered outside the Arizona Capitol to protest Biden’s narrow victory in the state. Protesters in Salem, Oregon, gathered at the Capitol. 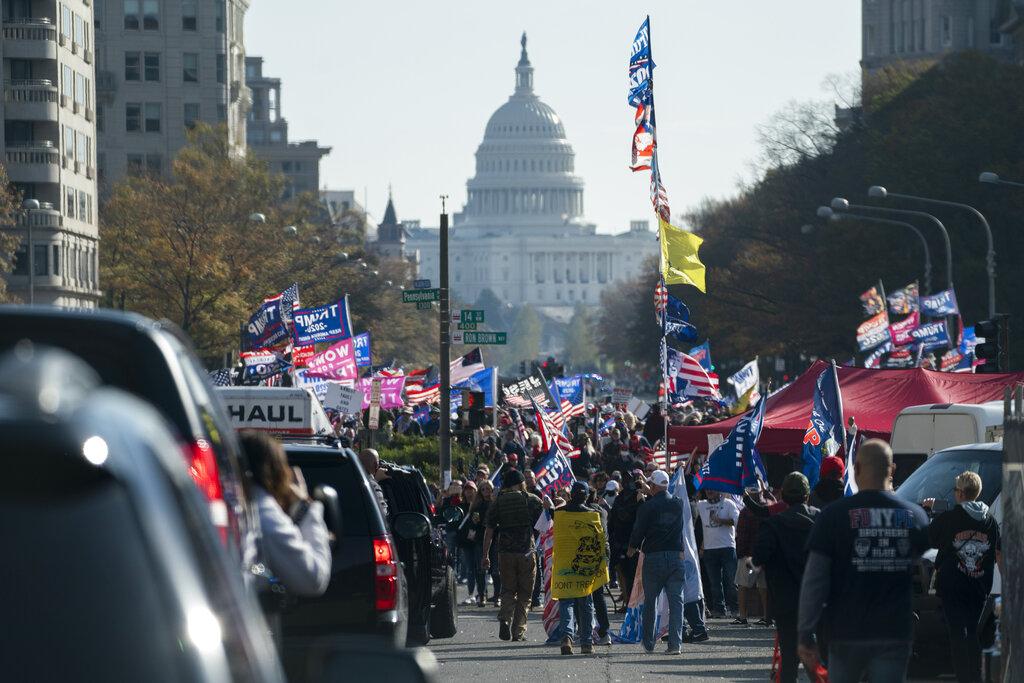 A motorcade carrying President Donald Trump drives by a group of supporters participating in a rally near the White House, Saturday, Nov. 14, 2020, in Washington. (AP Photo / Evan Vucci)

Among the speakers in Washington was a Georgia Republican newly elected to the U.S. House. Marjorie Taylor Greene, who has expressed racist views and support for QAnon conspiracy theories, urged people to march peacefully toward the Supreme Court.

The marchers included members of the Proud Boys, a neo-fascist group known for street brawling with ideological opponents at political rallies.

Multiple confrontations appeared later in the day as small groups of Trump supporters attempted to enter the area around Black Lives Matter Plaza, about a block from the White House, where several hundred anti-Trump demonstrators had gathered.

In a pattern that kept repeating itself, those Trump supporters who approached the area were harassed, doused with water and saw their MAGA hats and pro-Trump flags snatched and burned, amid cheers. As night fell, multiple police lines kept the two sides apart.

Videos posted on social media showed some demonstrators and counterdemonstrators trading shoves, punches and slaps. A man with a bullhorn yelling “Get out of here!” was shoved and pushed to the street by a man who was then surrounded by several people and shoved and punched until he fell face first into the street. Bloody and dazed, he was picked up and walked to a police officer.

The “Million MAGA March” was heavily promoted on social media, raising concerns that it could spark conflict with anti-Trump demonstrators, who have gathered near the White House in Black Lives Matter Plaza for weeks.

In preparation, police closed off wide swaths of downtown, where many stores and offices have been boarded up since Election Day. Chris Rodriguez, director of the city’s Homeland Security and Emergency Management Agency, said the police were experienced at keeping the peace.

The issues that Trump’s campaign and its allies have pointed to are typical in every election: problems with signatures, secrecy envelopes and postal marks on mail-in ballots, as well as the potential for a small number of ballots miscast or lost. With Biden leading Trump by wide margins in key battleground states, none of those issues would have any impact on the outcome of the election.

A former administration official, Sebastian Gorka, whipped up the crowd by the Supreme Court by saying, “We can win because he did win.” But, he added, “It’s going to be tough.”