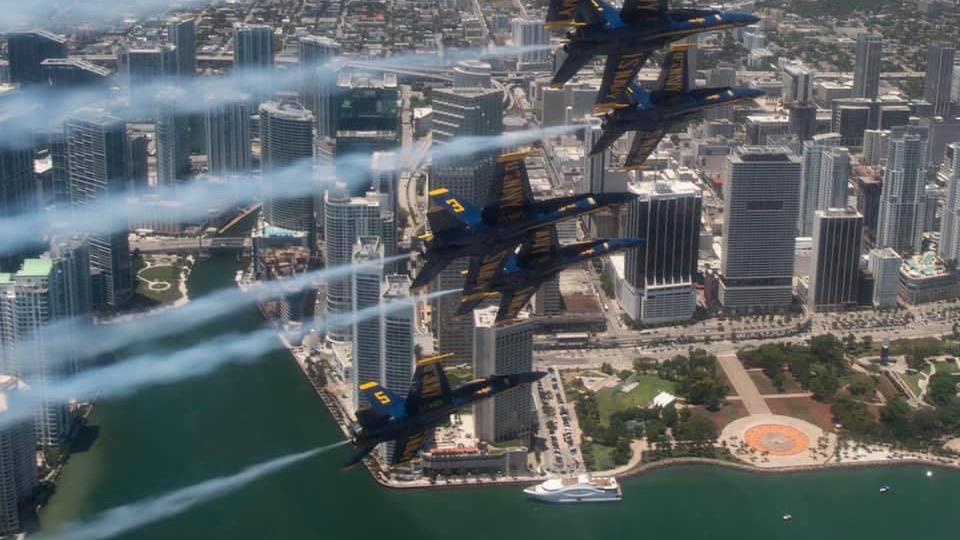 The Blue Angels are a fan favorite of Air and Water Show observers. (Courtesy of Blue Angels)

When the Chicago Air and Water Show was canceled for 2020 due to the coronavirus pandemic, the announcement included a hopeful promise: “We look forward to seeing everyone in 2021.”

But on Thursday, Mark Kelly, commissioner of the Department of Cultural Affairs and Special Events (DCASE), said that the annual summer fest may not return next year.

“Owing to the realities of a pandemic budget, Taste of Chicago and the Chicago Air and Water Show are not funded at this time,” Kelly said during ongoing 2021 budget hearings.

By not funding Taste of Chicago and the Air and Water Show, the city would save nearly $9 million, Kelly said, though he added that the events made that amount back several times over in terms of tourism dollars.

Despite a 68% cut in its programming budget in the coming year, DCASE will produce what Kelly called “a robust calendar of free cultural events,” including “reimagined” festivals. Partnerships with the Chicago Public Library and the Chicago Park District will help DCASE deliver more programming to the city’s neighborhoods, he said.

Though DCASE did manage in 2020 to create virtual and socially distanced programming enjoyed by a total audience of 1 million people, Kelly said there was no mistaking that the pandemic had caused “total devastation of the cultural landscape.”

Theaters, dance venues and music clubs are all dark, he said, with a financial blow to the city in the “hundreds and hundreds of millions” and rising.

“It’s going to be over a billion,” Kelly said of the hit to Chicago’s bottom line. “I think it helps us understand how necessary that cultural landscape is to the future of the city.”

The potential loss, for the second year in a row, of two of the city’s marquee events suggests the pain is likely to be felt well into 2021.

Speaking to the media at a press conference later on Thursday afternoon, Mayor Lori Lightfoot noted that DCASE is funded by hotel and restaurant tax revenue, which have “gone through the floor” in 2020.

If hotel occupancy rebounds, Kelly said DCASE would bounce back too, and with it perhaps Taste of Chicago and the Air and Water Show, which he reiterated were not “canceled” but rather currently “unfunded.”

“Our revenues are built on visitors returning to Chicago, so when our hotels begin to increase occupancy, we believe that tax revenue should enable DCASE to revive the cultural life of our city,” Kelly said. “We expect to play a major role in Chicago’s economic recovery.”