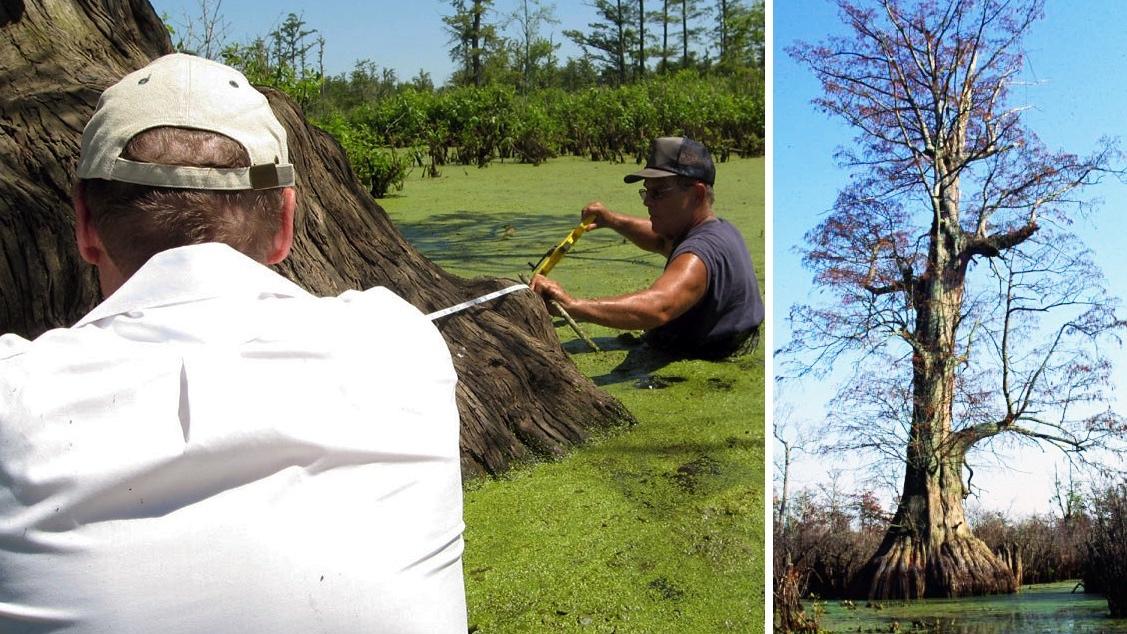 Christopher Evans still thinks about the green ash he came across a couple of years ago, and trust us, it takes a lot to impress a forester.

“I was working in this forest and looked out across the creek at the horizon and there was one tree that just towered above everything else. It was obvious that it was something special and out of the ordinary, even from a half-mile away,” said Evans, a research specialist and interim master naturalist coordinator with the University of Illinois Extension-Forestry.

If it hadn’t since toppled over, Evans’ giant ash would have been included in the Forestry Extension’s new interactive map of the Illinois Big Tree Register, a roll call of awe-inspiring specimens of the state’s native tree species.

According to a ranking system that accounts for measurements like height, canopy spread and diameter at breast height, an eastern cottonwood tree found in Ogle County is the state’s biggest of the big: 122 feet tall, with a 108.9-inch diameter and a 116-foot canopy spread.

Illinois can also claim two national champs: a 94-foot Shumard oak in Union County at the state’s southern tip is the biggest of its kind in the U.S., and — sorry, Buckeye State — Illinois’ 75-foot Ohio buckeye, in DuPage County on McDonald’s Oak Brook campus, takes the crown.

Of Illinois’ 183 native tree species, nearly 140 are represented on the Big Tree Register as a state “champ,” leaving 46 species still in need of a big discovery. And yes, there are big tree “hunters” who’ve rooted out a fair number of state champs, but absolutely anyone can nominate a tree for inclusion on the list. (Click here for more information.)

Minimum requirements for a champion tree aren’t as high a bar to clear as one might think: A tree needs to be just 13 feet tall, with a diameter of at least 3 inches at a height of 4 feet and 6 inches off the ground. Some tree species are naturally smaller, so some of the state’s champs are tiny compared with others, Evans said.

But to bag a truly big tree takes a bit of skill.

“The biggest tip I would give to anyone interested in finding big trees is to go out and look at a few of our state champions in person to get a sense of how big they are. These are often on so much bigger of a scale than what most people are used to seeing,” Evans said. “Also, being familiar with your different tree species really helps. If you know what a normal shagbark hickory looks like, you are going to be able to recognize when you see a tree that is far outside of those normal metrics.”

Forestry specialist Jay Hayek, who has managed the register since 2004, said it’s particularly helpful to get to know trees by their bark, twigs or fruit as much as their foliage. That way, people can hunt for big trees during the dormant season, which is when Hayek does most of his scouting.

“I don’t enjoy losing a quart of blood to mosquitoes during the summer months,” he said. “A little luck and a keen eye to find these trees is usually all that is necessary. We have state champion trees found in swamps, natural forests, hillsides, ravines, municipal rights-of-way, parks, cemeteries, etc.”

To narrow things down a bit, Evans suggested searching for big trees in the margins, along the state’s border lines.

“Illinois is a state on the edge of a lot of different major ecosystems. For example, the swamps of the South just sneak into far southern Illinois and bring with it water tupelos, bald cypress and water elms,” he said. “The Ozarks occur in Illinois only along the southwestern edge of the state. Some of the northern habitats, like bogs, occur just in northeastern Illinois. Because of this, our tree diversity is concentrated along the edges of the state more so than in the middle.”

While there’s certainly a competitive aspect to the Big Tree Register, it was actually created back in 1962 as an outreach project, a forestry awareness campaign designed to increase knowledge about and interest in native trees. Thanks to the release of the interactive map and a social media campaign of sorts — posting the register’s Top 10 to Facebook and Instagram — the Forestry Extension has created renewed buzz for big trees.

Forests once covered 13 million acres in Illinois, or more than one-third of the state. By the early 1900s, clear cutting and conversion of land for agricultural use had stripped all but 3 million of those acres, Evans said.

Many of the register’s state champ trees are survivors of that destructive period, and these old-growth remnants provide a natural history of Illinois that, depending on the species, could date back nearly 1,000 years.

Other big trees are a sign of forest recovery.

The forests of Illinois have been growing again since the nadir of the early 1900s — forests now take up 5 million acres, and they’re maturing. Nearly half of the state’s forests are more than 60 years old and with that comes more big trees, Evans said, the value of which can’t be overstated.

Large trees remove carbon from the air, soak up stormwater, and provide much needed shade in urban areas. Their presence in an ecosystem is also a boon for wildlife, he said.

Turkeys love to roost in tall trees; other birds and critters make their homes in the nooks and crannies or dead limbs of older trees; and bats will use the thick, flaky bark of large trees as maternity roosts, Evans said.

Apart from these tangible benefits, there’s something about these giants of the plant world that inspires a kind of reverence.

“I think they just exist on a size and time scale that is so far outside of what we are used to seeing for living organisms,” said Evans.

Their soaring, stately presence also has a way of putting people in their place. “Standing next to a big tree is very humbling,” Hayek said, “and, for a lot of people, very spiritual.”

How do big trees get so, well, big? There’s no single answer, Evans said. But in general, the right soil, ideal moisture levels and room to grow give a tree a shot. On the flip side, poor soil, the wrong moisture level and competition from other trees will stunt a tree’s growth. Shade, in particular, will keep many species of trees from reaching their full potential.

Here are some fun facts about Illinois trees that have beaten the odds. 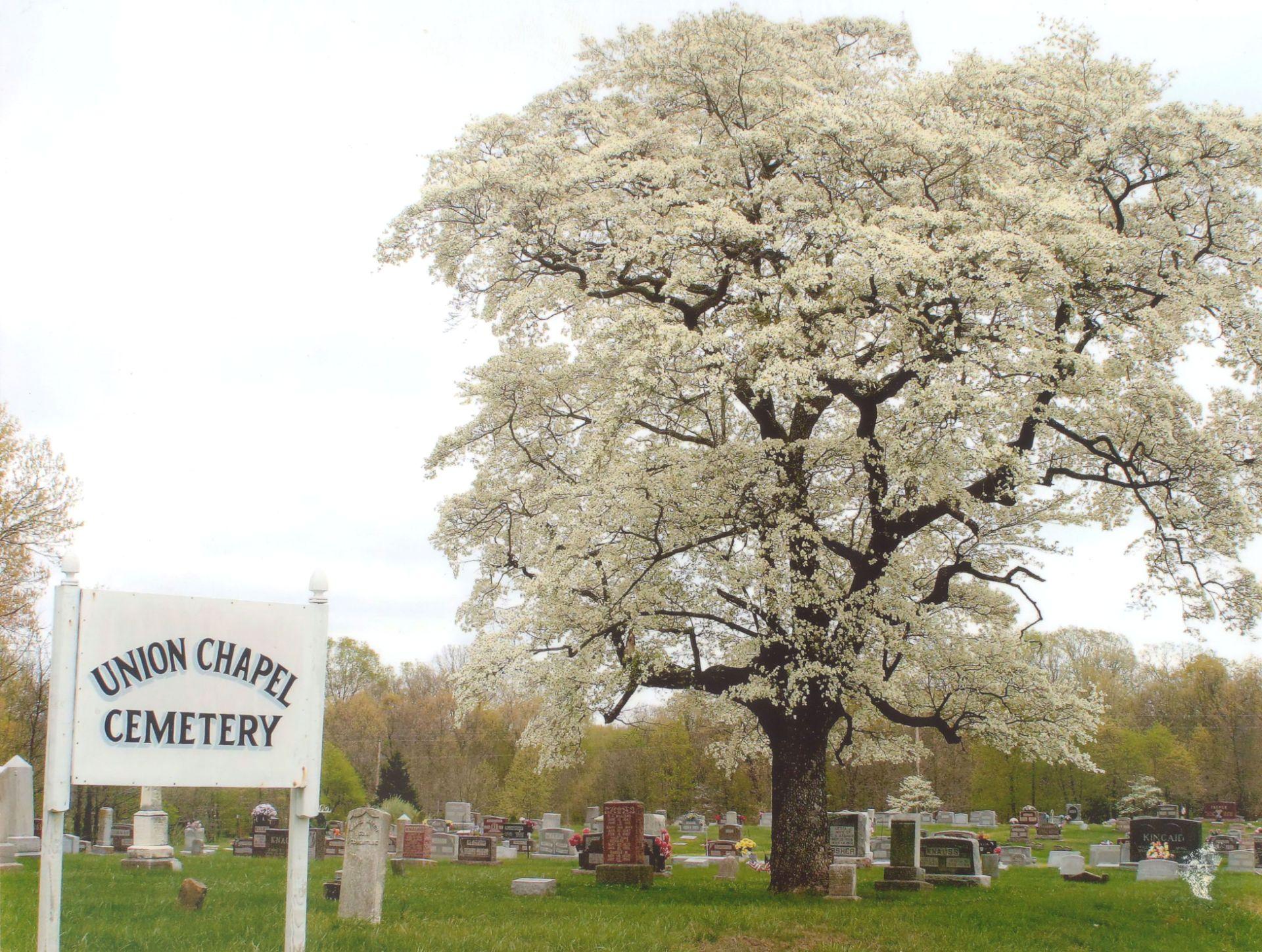 The longest reigning champion on the Big Tree Register is the state champion flowering dogwood, which was nominated back in 1971. Hayek said he plans to submit this dogwood to the National Register of Champion Trees.

The state champion bald cypress in southern Illinois held the No. 1 spot on the register for 27 years since it was recorded in 1991. It’s 64 feet tall and has a diameter of 131 inches at breast height. The Ogle County cottonwood unseated the cypress in 2018.

Cottonwood, clearly, has great potential to grow big. A species people may not think about is the tulip tree, Evans said. Also called yellow poplar, the tulip tree is the tallest hardwood species in America, with eastern specimens reaching 200 feet tall. The Illinois state champ is 97 feet tall, and Evans said he doesn’t doubt there are much taller ones out there.

The species in need of a state champ aren’t necessarily the rarest. “Ironically, one of the most uncommon and difficult-to-find hickories in Illinois, Carya pallida (sand hickory), is currently listed on the Big Tree Register,” Hayek said. Some trees, like the green ash, simply lack a submission or are difficult to identify down to the species level.

Not all trees were built for size, so “big” is relative. Case in point: the littlest of the big trees, the 22-foot-tall state champion witch hazel, found in Northbrook, has the lowest point total of any tree on the register.

If you want to make a mark on the Illinois Big Tree Register, Evans and Hayek suggest going after some of the low-hanging fruit. Just find a 13-foot tall Mockernut hickory, Musclewood, Downy serviceberry or any of the other 46 champ-less species.