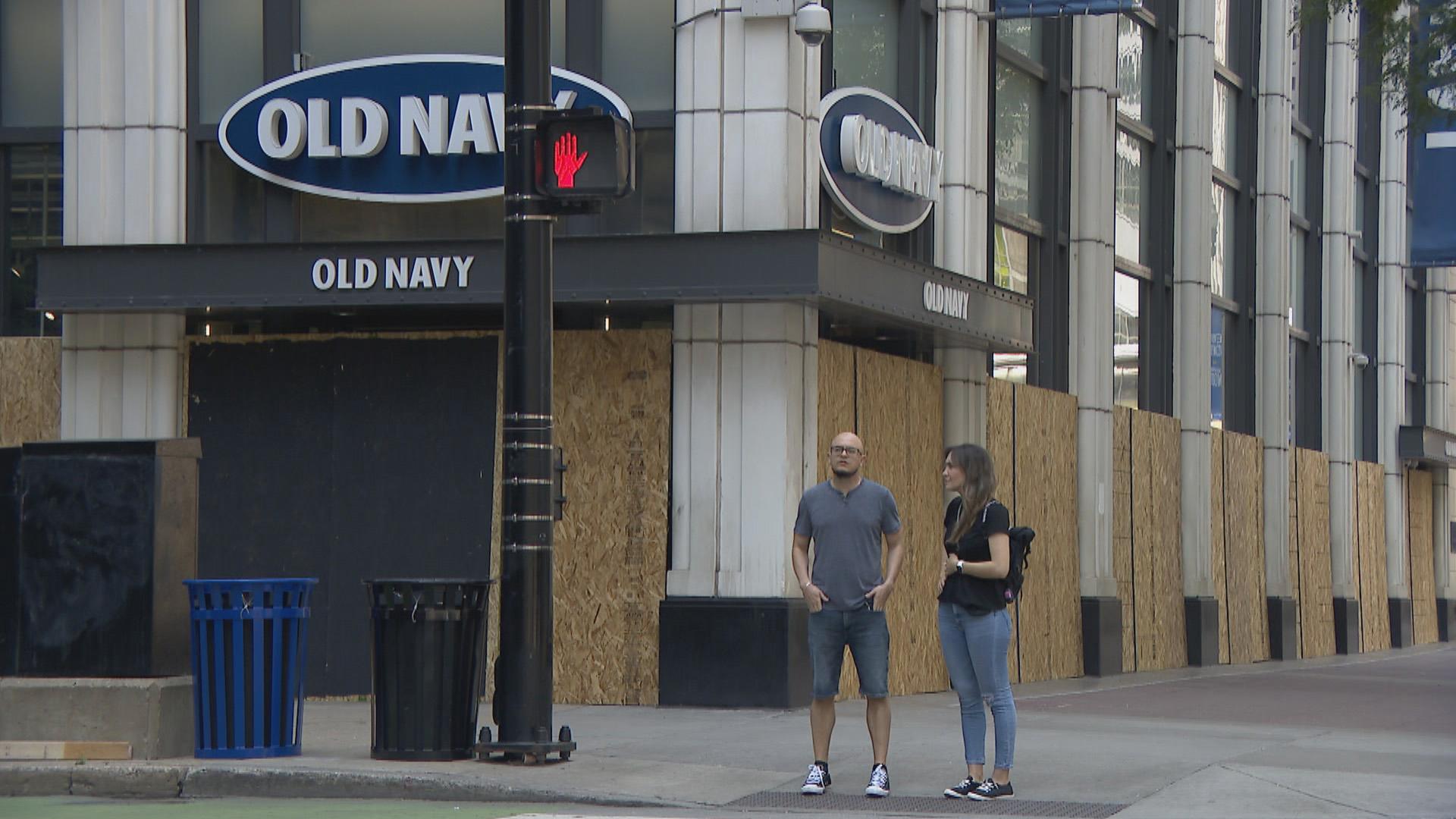 An Old Navy store in downtown Chicago is boarded up Monday, Aug. 10, 2020 after a night of looting and unrest. (WTTW News)

A decision to send hundreds of Illinois National Guard troops to Chicago in an effort to reduce escalating violence and sustained protests amid the coronavirus pandemic could “stigmatize areas of the city for years to come,” the state’s homeland security director and a former brigadier general of the guard told aldermen on Wednesday.

Alicia Tate-Nadeau, the head of the Illinois Emergency Management Agency, told aldermen she could not “overstate the visual impact” of deploying the guard to Chicago neighborhoods, especially those made up of Black and Latino residents.

“The unintended effect may be that people will feel less safe,” said Tate-Nadeau, who led Chicago’s Office of Emergency Management and Communications until she was tapped to lead the state’s emergency response by Gov. J.B. Pritzker in 2018. “It could stigmatize areas of the city for years to come.”

It would cost the city $54 million to fund a four-month deployment of National Guard troops to Chicago, as called for by several aldermen, Tate-Nadeau said.

During the debate that took place Wednesday afternoon during a meeting of the city’s Public Safety Committee, three aldermen supported the call for the National Guard to be sent to Chicago — Alds. Raymond Lopez (15th Ward), Anthony Napolitano (41st Ward) and Matt O’Shea (19th Ward).

“Extraordinary times call for extraordinary measures,” Lopez said. “No one deserves to live in fear.”

Lopez and Napolitano helped force an unprecedented City Council meeting to take place on Aug. 21 to consider their demand for the National Guard, but they did not have enough support to force a vote on their proposal. Instead, the matter was sent to the Public Safety Committee for a hearing, which took place Wednesday. No vote was held.

“I firmly believe Chicago needs to solve its own problems,” Brown said.

However, if Chicago again experiences sustained unrest or looting, it could make sense to ask the governor to deploy the National Guard to Chicago again, Brown said.

Napolitano, the only member of the Chicago City Council that is not a member of the Democratic Party, said the guard was needed because “armed gang bangers are taking over our streets.”

Several times during this spring and summer, Chicago police officers were ordered to cancel their scheduled days off and work 12-hour shifts, “working officers to the bone,” said Napolitano, a former police officer and firefighter. Those officers should be relieved by National Guard troops, Napolitano said.

Milan, who said he grew up in Beverly — the Far South Side neighborhood that is home to many police officers and city workers — said his parents and neighbors would have “dug a moat” around the neighborhood if forced to live in an area with frequent shootings and murders.

There is “utter lawlessness across the city,” said O’Shea, who represents Beverly and Morgan Park. “My residents are scared, my residents are frustrated and they are angry.”

It would not make sense to approve a plan calling for soldiers armed with military weapons to “flood our streets,” Taliaferro said.

Ald. Harry Osterman (48th Ward) said he could not support a plan that would allow National Guard troops to patrol Chicago streets after just two days of training that would not cover the requirements of the consent decree that governs the operations of the police department.

“That is a recipe for disaster,” Osterman said.

Several aldermen, including Alds. Jason Ervin (28th Ward) and Matt Martin (47th Ward), said the city should do more to address the root causes of crime through afterschool programming and anti-violence programs.

Mayor Lori Lightfoot opposes calls to deploy the National Guard to Chicago for the second time since May 31, when protests against police brutality and systemic racism triggered a wave of unrest that swept the city. National Guard troops were used to block off the Loop and Central Business District, but troops did not police the city.

“And while I absolutely understand the concerns of those across our city who are worried about their safety, what I know from that experience, and what I know now, is that the National Guard has a very different set of training. A very different perspective on force,” Lightfoot said Aug. 21. “They’re military.”

National Guard troops were deployed to other cities this summer with “disastrous consequences,” Lightfoot said.