Republican Convention Takeaways: All Trump, All The Time

Video: Winners and losers from night one of the Republican National Convention with our Spotlight Politics team of Amanda Vinicky, Paris Schutz and Heather Cherone. (Producer: Alex Silets)

WASHINGTON (AP) — President Donald Trump aggressively asserted control over the Republican National Convention on Monday, overshadowing the prime-time speakers, as he made clear he wants voters to focus on him.

Takeaways from the first night of the convention:

Never one to shy away from the spotlight, Trump showed he will be omnipresent at the convention, appearing every night and sure to dominate the proceedings.

He made certain he was highly visible Monday with some preliminary appearances and a spasm of tweets.

Traditionally, the presidential nominee — including Democrat Joe Biden last week — makes a fleeting convention appearance or two early in the week but largely stays on the sidelines, building anticipation for the acceptance speech on the final night.

Trump has tossed that conventions’ convention aside.

He is expected to appear every night, potentially joining First Lady Melania Trump and Vice President Mike Pence at their prime-time speeches.

To Trump, the answer to nearly any crisis is almost always more Trump. 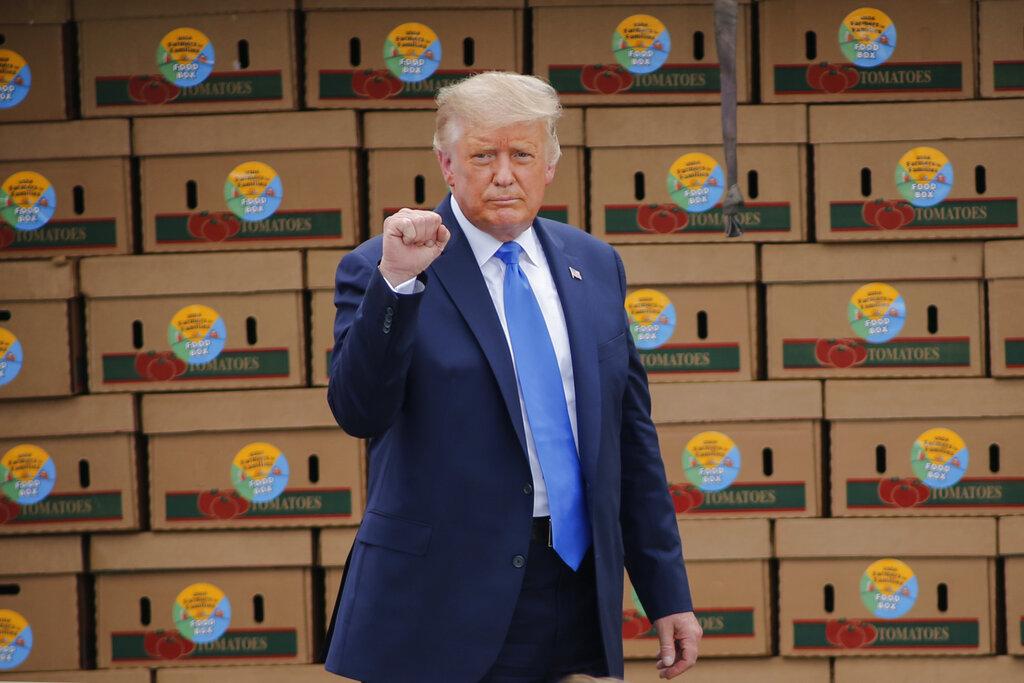 Some Republican operatives have expressed private worry that America is suffering from Trump fatigue.

But the president is not one to cede the stage. On Monday, he soaked in gauzy homage from supporters. He watched triumphal footage of his presidency and attack ads on Biden. And he inserted himself in the program several times, a likely preview of the next three days.

Republicans are not known as the party of diversity. But on Monday, the party showcased two of its stars, Sen. Tim Scott of South Carolina and the state’s former governor, Nikki Haley, to try to tell a different story.

Both argued that the president and his party had done a lot to help minorities across the nation.

“We live in a world that only wants you to believe in the bad news, racially, economically and culturally-polarizing news,” said Scott, the party’s only African American senator. “We don’t give into cancel culture, or the radical — and factually baseless — belief that things are worse today than in the 1860s or the 1960s.” He added that Biden would turn the U.S. into a “socialist utopia.”

Both Scott and Haley, who is Indian-American, blasted Democrats for taking minority voters for granted and for not doing more to stop what they depicted as lawlessness in American cities amid the protests that have swept the nation after George Floyd, a Black man, died under the knee of a white Minneapolis police officer.

“America is a story that’s a work in progress. Now is the time to build on that progress, and make America even freer, fairer and better for everyone,” said Haley, who served as Trump’s ambassador to the United Nations. “That’s why it’s tragic to see so much of the Democratic Party turn a blind eye toward riots and rage.”

Trump’s campaign doesn’t expect large gains among minority voters, but it does hope that those same voters are not energized to turn out in great numbers for Biden.

BE AFRAID. BE VERY AFRAID

Trump complained last week that Democrats “held the darkest and angriest and gloomiest convention in American history.” But on opening night of their convention, Republicans are doing their share, spreading fear of a Biden victory on Nov. 3.

“Make no mistake: No matter where you live, your family will not be safe in the radical Democrats’ America,” Mark and Patricia McCloskey, the St. Louis couple who pointed firearms at Black Lives Matter protesters outside their house in June, were to say.

Conservative activist Charlie Kirk warned the convention that a Trump victory was imperative to “ensure that our kids are raised to love America, not taught to hate our beautiful country.”

Trump, he added, “is the bodyguard of Western civilization.”

South Carolina Sen. Tim Scott was to argue Democrats are campaigning on a “cultural revolution” for a “fundamentally different America.”

The apocalyptic messaging comes as Trump’s campaign strategists are aiming to motivate their own base with dire warnings of a Biden win — and to do their best to depress votes for the Democratic ticket from moderate voters who aren’t sold on Trump either.

VIRUS IN REMISSION AT RNC

The Republican National Convention is a testament to the campaign Trump wishes he could run.

For nearly six months, the coronavirus pandemic has upended every aspect of American society and scuttled the type of campaign — full of packed rallies and combustible issues — that Trump wanted to steer.

But the lineup and themes of the convention beginning Monday made mentions of the COVID-19 pandemic only in the context of what were portrayed of Trump’s successes, with scant attention to the more than 175,000 Americans who have died, or the fact that Americans overwhelmingly give the president low marks for his handling of the crisis.

Trump made an appearance at the White House with everyday Americans, without recommended social distancing and with no one wearing a mask.

Even the setting of the program is meant as a rebuke to the virus. While the Democrats held a virtual convention out of respect for social distancing and public health guidelines, the president has insisted on the trappings of a convention, including in-person, live speeches and a crowd of up to 1,000 people on the White House South Lawn to hear his acceptance speech Thursday night.

The tributes to Trump for his leadership and policies were standard partisan fare. But Republicans also tried to show a side of the president that is rarely on display — namely, empathy.

Empathy is considered one of Biden’s signature traits, but Trump wanted Americans to see that side of him, too.

“There’s only one person who has empathized with everyday Americans and actually been fighting for them over the past four years, and that is President Donald Trump,” said RNC Chairwoman Ronna McDaniel.

Herschel Walker, the former professional football player, countered assertions that Trump is racist. Walker said he would not abide a racist. “Some people don’t like his style,” he said, adding: “People on opposing teams didn’t like it when I ran right over them either. But that’s how you get the job done.”

The comments appeared to be an attempt to mitigate the effect Trump’s rhetoric and behavior have had on his support among moderate voters, suburban women and older voters.

Rep. Jim Jordan, one of Trump’s most bombastic backers, testified to Trump’s “intensity and his willingness to fight. But what I also appreciate is something most Americans never see — how much he truly cares about people.” He spoke of how Trump consoled his family after the death of his nephew.