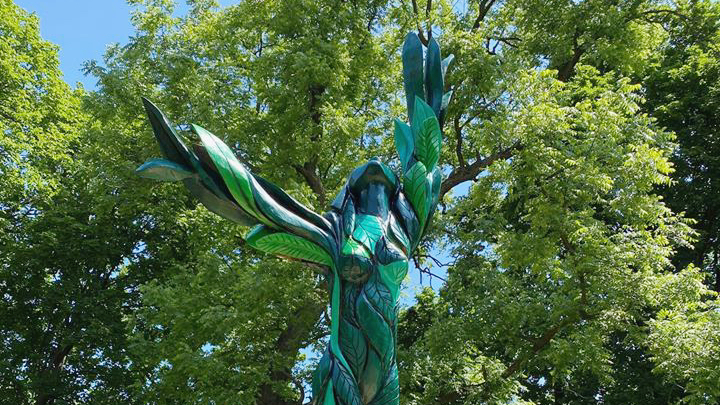 "Green Lady" in Jackson Park is the latest sculpture to breathe new life into one of Chicago's dead ash trees. (Chicago Sculpture International)

The revving of a chainsaw, in close proximity to a tree, is typically a death knell.

Yet that same implement, in the hands of sculptor Gary Keenan, signals renewed life.

“It’s considered a butchering-style tool,” said Keenan, a chainsaw artist who lives in Des Moines, Iowa. “People often comment on that; that it’s a wicked tool used to create what is hopefully beautiful art.”

Keenan’s latest project brought him to Chicago’s Jackson Park in June, where, a full year and a half after receiving a commission from the Chicago Tree Project, he began work on what he nicknamed “Green Lady.” (Alternative name: “Mother Peace.”)

His canvas: an ash tree, killed by the emerald ash borer. The subject: a majestic 15-foot-tall verdant goddess, both from the earth and of the earth, her branched arms reaching skyward.

It’s an image Keenan had been carrying around in his head for some time, this woman made of foliage, but he wasn’t sure he’d ever be granted the artistic license to bring his vision to fruition.

“My favorite genre to work with is mythology, but people usually don’t commission that kind of thing. I have done a couple dragons, a couple gargoyles, a few mermaids, but it’s not a common thing,” said Keenan, who’s been sculpting wood for 20 years. “Of course the most common theme for a chainsaw sculpture is wildlife. Especially bears, eagles, owls, raccoons, squirrels.”

The Chicago Tree Project, a collaboration established in 2014 between the Chicago Park District and Chicago Sculpture International, offered him free rein to finally realize the “Green Lady” design — with some input from the tree itself.

“I have to work with the shape of the tree,” Keenan said. “I have to be flexible with my plan sometimes.”

In the sketch Keenan originally submitted, the sculpture’s arms were in a “V” position, which required a pair of branches set at a 45-degree angle. The Jackson Park tree, situated near Stony Island and 57th Street, had exactly what he was looking for — 25 feet in the air. It was too high.

“I commented to my contacts, ‘People won’t see her up there.’ It would be that much harder to work on, it would take a lot of scaffolding,” Keenan said. “Looking at the size of the tree, I said, ‘Hey, she could be at ground level, larger than life.’”

In the finished carving, one of the lady’s arms is vertical and the other is nearly horizontal, but curving upward.

“I think that works better,” Keenan said. “I didn’t want her to be called ‘Touchdown Green Lady’ like the mosaic Jesus at (the University of) Notre Dame, ‘Touchdown Jesus.’”

“One of the last days I was working on her, there were some teenage girls skipping rope on the sidewalk. And after a while they stopped and positioned themselves kind of in front of (the sculpture). They all raised their arms the same way,” Keenan said. “And the next day, a father and daughter did the same thing. The daughter stood in front of her and raised her arms up and the dad took her picture. It seemed a little bit iconic. That’s different than any other carving I’ve done.” 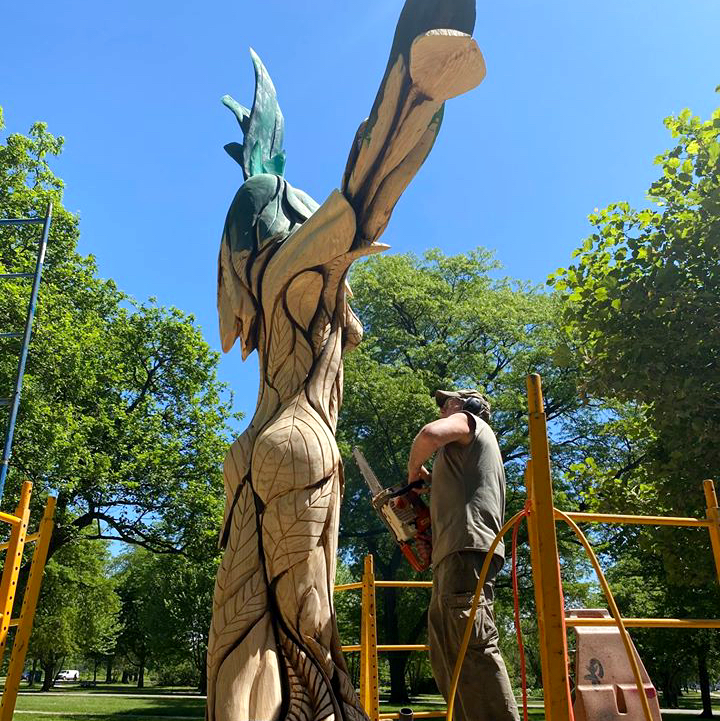 Sculptor Gary Keenan at work on “Green Lady.” Keenan, who lives in Des Moines, Iowa, stayed in Evanston while working on the carving. He had been dreading the commute to Jackson Park — "In Iowa if you drive for an hour, you can go 70 miles," he said — but due to the COVID-19 pandemic, traffic was minimal. The biggest challenge turned out to be finding any place open for carryout at the end of a long day of carving. "I had to do fast food drive thru most of the time," he said. (Chicago Sculpture International)

Though Keenan is a familiar presence on the summer state fair circuit, he normally carves in isolation.

He visualizes the sculpture in his mind and then wields his chainsaw like a scalpel, making quick, precise cuts. It’s an intuitive talent Keenan believes “reduction” sculptors like himself — people who chip away at wood, stone or ice to create art — are born with, not taught.

“I prefer to get into a zone where it’s just me and the chainsaw. I’ve got my music and my headphones and it’s just me and this piece of wood and I’m shaping it,” he said. “That’s what I like about my work, is that I can tune out the world and do my thing.”

His experience carving Green Lady was unique in the amount of interaction he enjoyed with passersby.

“She just prompted introspection in many people and I found that very interesting. People described her as being powerful, mystical, sexual. They loved the fact that she was rooted in the earth,” Keenan said. “I had a lot of comments that she’s all positive in this time when there’s so many negative things we’re dealing with: the virus, the racial tensions, the economy being down. She seemed to lift the spirits of many people.”