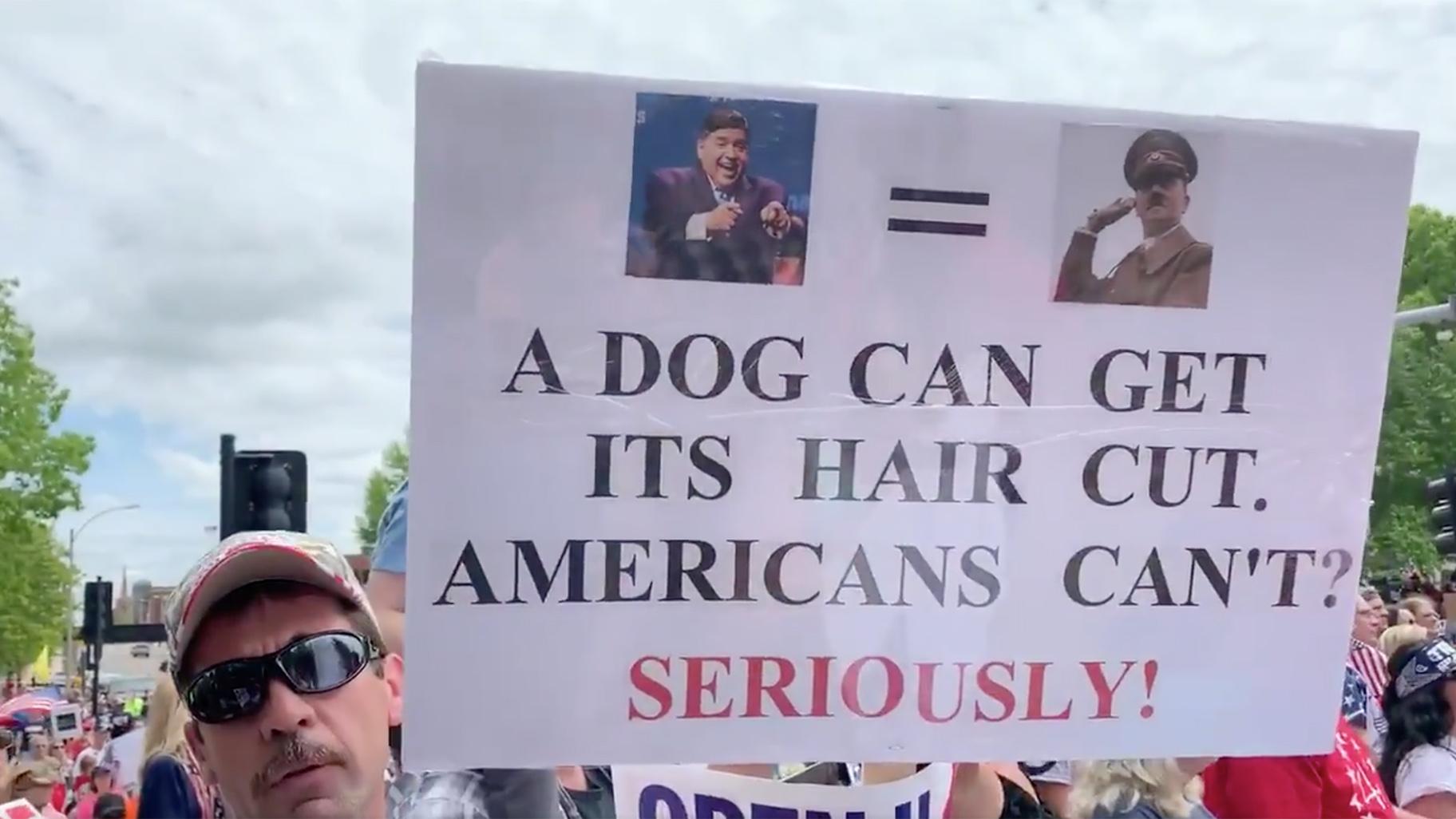 The Anti-Defamation League says some of the activity at rallies protesting Pritzker’s stay-at-home order is “vile” and racist.

“The comparison of Illinois’s democratically elected governor to Hitler is antisemitic – period. Such vile comparisons trivialize and dishonor the memories of the millions killed by Nazi Germany,” ADL Midwest Regional Director David Goldenberg said in a statement.

In an interview with WSIL/WGEM/WEEK-TV’s Mike Miletich, a man who identified himself as Doug Walter, of Pana, said that Pritzker is like Hitler because he’s trying to control Illinois residents.

At a rally in Springfield on Saturday, Walter carried a sign that had a photo of Pritzker and a photo of Hitler with an equal sign between them. The sign read, in part: “A dog can get its hair cut. Americans can’t. Seriously?”

This man has another sign comparing Gov. Pritzker to Adolf Hitler. I asked him if he’d explain why he has this sign. #twill pic.twitter.com/EFku9YkquQ

When Miletich asked whether was appropriate to have an anti-Semitic sign, Walter said, “Sure it is” and pointed to the picture of the governor.

“He is Hitler. They’re one in the same,” Walter said. “Why would he send his kid and his wife to Florida that opened the state up; they must all be dying down there, right, because they opened their state? He hasn’t opened our state.”

Miletich also tweeted a video of someone carrying a “death to tyrants” sign at the rally.

“This kind of message is dangerous. This man was standing next to the speakers. He knew what he was doing. He wanted this message to be seen,” Pritzker spokesperson Jordan Abudayyeh tweeted.

This kind of message is dangerous. This man was standing next to the speakers. He knew what he was doing. He wanted this message to be seen. https://t.co/9LjUJGwOqD

Some activists who are part of the Re-Open Illinois movement took to social media to push back.

“ReOpen Illinois does not support ANY kind of anti Semitic messaging whatsoever,” wrote someone from the account @ReOpen_Illinois.

It is not immediately clear who the writer is, nor who leaders of the apparently organization are.

A man named Alex Walker, who described himself in his profile as pro-gun, pro-Trump and pro-God, wrote on Twitter: “@ReOpen_Illinois has tried hard to avoid this. It’s unfortunate that of all the signs and numerous people at our rallies - @jordanabudeyyeh wants to nitpick on one!”

“By the way- how’s the governors family? Since they’re above his own executive order? Sorry Jordan… that’s exactly the same thing Hitler used to do! So don’t cry when people call it like it is.”

By the way- how’s the governors family? Since they’re above his own executive order? Sorry Jordan... that’s exactly the same thing Hitler used to do! So don’t cry when people call it like it is. https://t.co/KgU2WaAQkt

Critics say Pritkzer is a hypocrite for telling Illinois residents to be careful about traveling to other states during the pandemic, like Wisconsin, where coronavirus restrictions were recently lifted.

During a press briefing Friday about the virus in Illinois, Pritkzer acknowledged that his wife and daughter had spent part of the quarantine period in Florida, and that his family is now in Wisconsin.

The governor cited threats, including the “hateful signs” at rallies at the state capitol and outside his Chicago government office at the downtown James R. Thompson Center that “reference me personally and that suggest, if not say, but suggest the potential for violence.”

Pritkzer, a billionaire, also referenced that he owns a farm in Wisconsin.

“There are animals on that farm, that it’s an essential function to take care of animals at a farm, so that’s what they’re doing,” he said.

Critics have called that disingenuous, given that Pritzker’s immediate relatives are not believed to be farmhands.

Pritzker called on Republican political groups to stop pushing stories that “are putting my children and family in danger.”

In a report released Tuesday, the ADL says its tracking showed anti-Semitic incidents reached an all-time high nationally in 2019, with 2,100 “acts of assault, vandalism and harassment” last year.

While the ADL also reported a 12% increase in anti-Semitic incidents in the Midwest, 2019 saw a 14% decrease in incidents in Illinois – down from 51 to 44.

Meanwhile, religious organizations that have sought help from the judicial branch in striking limitations on services in Pritzker’s order have not had success; various attempts seeking injunctions have been turned down.

The executive order that stands through May permits socially distanced religious gatherings of 10 or fewer individuals.

Chicago Mayor Lori Lightfoot on Friday sent a letter to Chicago faith leaders, “at a moment where there is frustration and concern about the continued limitations on the number of people who can be convened for worship,” funerals, baptisms, breaking fasts and other such gatherings.

In the letter, Lightfoot pushed back on those who say orders prohibiting gatherings trample on the constitution’s protection of the free exercise of religion and said that she would be “resolute” in enforcing the stay-at-home-order “no matter the source or intention.”

“As a person of faith, my constant prayer is for strength and wisdom,” Lightfoot wrote. “These limitations on our mobility are necessary to save lives.”

She encouraged them to “continue your ministry, but do it consistent” with social distancing guidelines, and said that she will continue to engage in a conversation with religious leaders about what a “gradual reopening” will look like when the time is appropriate.