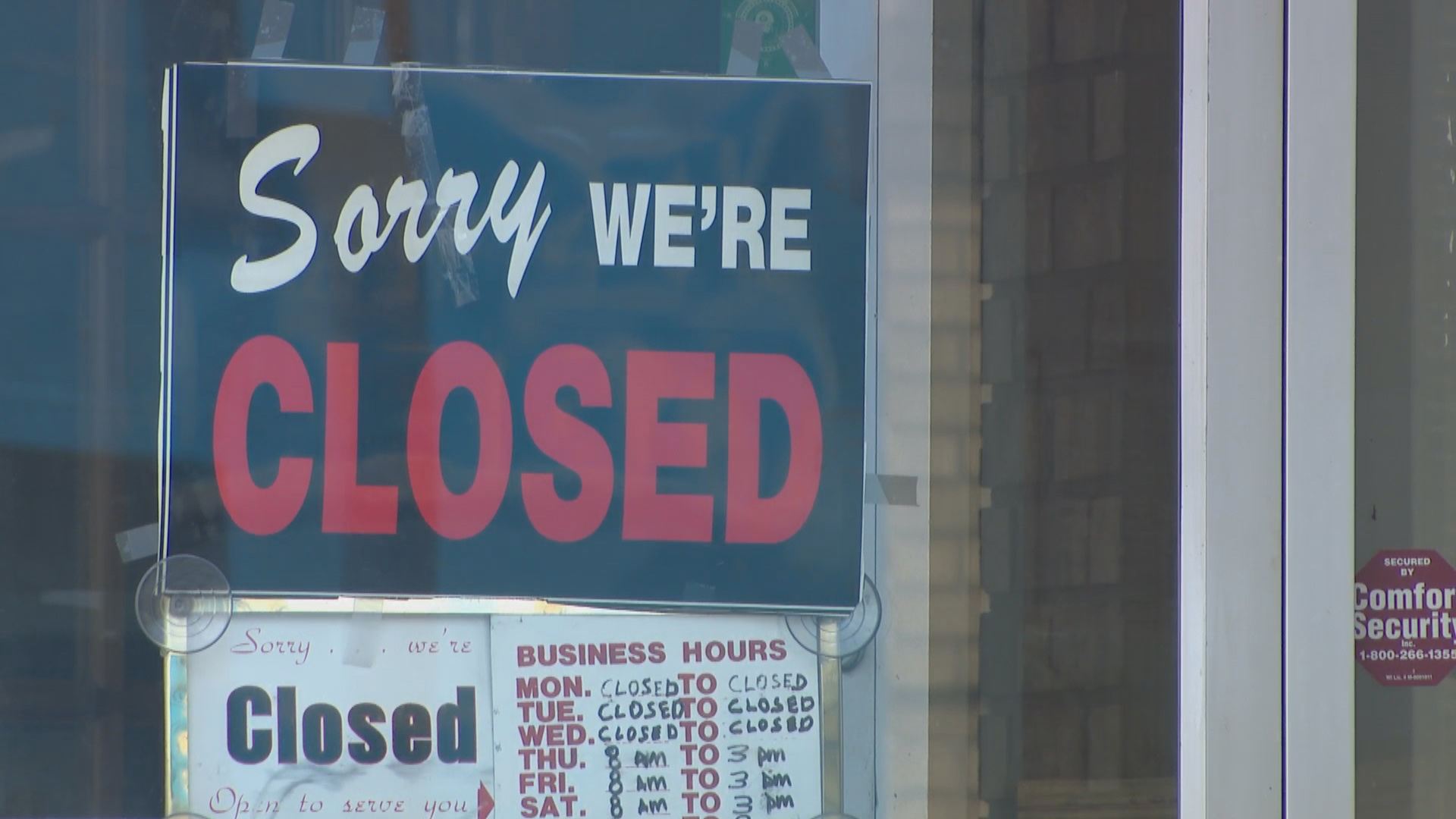 Bars, restaurants and other businesses that open to customers in defiance of Illinois’ stay-at-home order now risk being charged with a misdemeanor.

The new penalty level has been in effect since Friday afternoon when Gov. J.B. Pritzker’s administration quietly filed the emergency rule. While Pritzker’s executive order requires restaurants, salons and gyms to remain closed to on-site patrons due to COVID-19, the rule change codifies it under Illinois Department of Public Health regulations – violators of which can be charged with a Class A misdemeanor.

As of Saturday afternoon there’s no indication it has yet been enforced.

A Class A misdemeanor in Illinois is punishable by a fine between $75 and $2,500.

Members of Pritzker’s cabinet described it as a new and gentler “tool” that law enforcement can use to keep businesses closed during the coronavirus pandemic – and therefore keep people safe – that’s less severe than other options, like closure orders or stripping establishments of their liquor licenses.

But critics describe it as an excessive and broad punishment, and an overreach by the administration.

Illinois House Republican Leader Jim Durkin, R-Western Springs, said in a statement Sunday: “These rules are a legal overreach and beyond the scope of the Governor’s authority. It will be a dark day in Illinois when we charge small businesses with a jailable crime for salvaging their livelihoods.”

State Rep. Keith Wheeler, R-Oswego, said the administration should have gone out of its way to educate businesses about the change before it took effect, noting that Pritzker said nothing of the rule during his last coronavirus briefing on Friday.

“We’re making a lot of crimes here out of a single rule with no oversight,” Wheeler said.

Pritzker’s top attorney, Ann Spillane, admitted a misdemeanor charge could be seen as “intimidating,” especially if it was targeted at bartenders or servers. But because it’s instead aimed at businesses, she said there’s no threat of jail time and believes it’s a “less dramatic” step than some other alternatives.

She described the charge as “very mild, like a traffic ticket … nobody’s getting arrested or handcuffed. But they are getting a citation where they would have to go to court.” 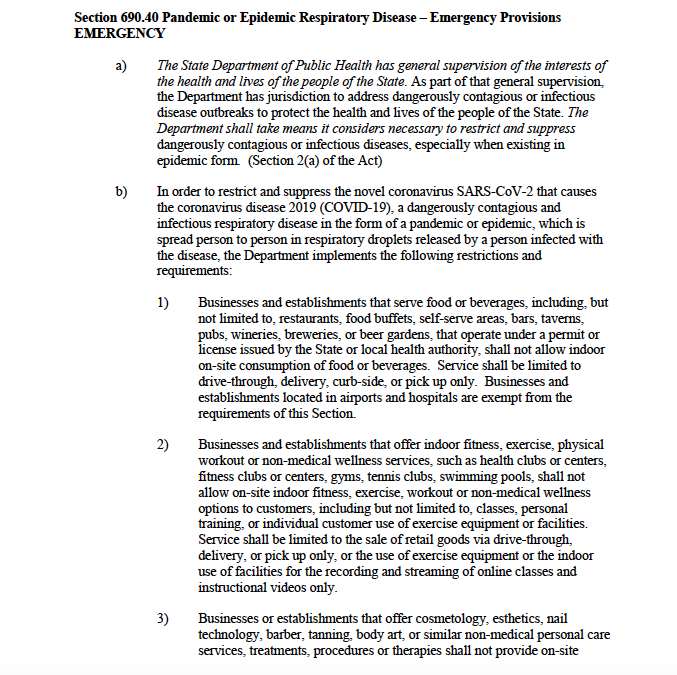 Restaurants, salons and gyms were already closed to on-site patrons due to COVID-19, but the new rule change codifies it under Illinois Department of Public Health regulations – violators of which can be charged with a Class A misdemeanor. (Illinois Administrative Code)

Senate Minority Leader Bill Brady, R-Bloomington, says the sudden rule change is an example of why Senate Republicans have called for public hearings on the governor’s plan.

“The legislature needs to be involved in the decision making process during these unprecedented times,” Brady wrote Sunday on Twitter.

Pritzker has increasingly faced a backlash to his “Restore Illinois” plan, which would not allow restaurants and bars to welcome dine-in customers until the end of June at the earliest.

Some establishments have begun opening their doors to customers despite the order forbidding it, saying they have no choice or they’ll go out of business entirely.

While the governor initially said enforcement would be up to local officials, his rhetoric has intensified in recent days.

“Counties that try to reopen in defiance will not be reimbursed by FEMA for damage they cause themselves. Local law enforcement and the Illinois State Police can and will take action,” Pritzker said Wednesday. “Businesses and individual professionals that are licensed by state agencies can be held accountable for defying public health orders.”

Spillane and Kelly both said law enforcement has made a point of taking an incremental approach, focused first on communication and encouraging compliance.

Should that not work, law enforcement has the option to issue a cease-and-desist order.

But if business owners continue to refuse, the next steps would have been to issue a closure order – meaning the establishment would have to shut down completely, including for curbside and delivery orders – or pull an establishment’s liquor license.

Spillane described getting a misdemeanor charge as less severe, and an opportunity for businesses to “pause to say: ‘OK, we’re going to close, this is not worth it.’”

“It’s going almost an extra step because we don’t want bars and restaurants that can do delivery and pickup, we don’t want them to be missing out on that business,” she said. “As a business dealing with this, it is probably much less expensive in terms of getting a lawyer to help you with a misdemeanor than getting a lawyer to deal with a license revocation hearing, or a public health closing hearing.”

The rule is targeted at restaurants, tanning salons, barbershops, gyms and other operations at the greatest risk for spreading COVID-19.

“This won’t change the physical approach that police have been taking, these are not ‘run into a business like it’s a robbery.’ This is walking in, having a conversation, trying to reason with the business owners, and if that doesn’t work here’s an additional tool,” Kelly said. “They’re wearing PPE, not riot gear.”

The state police director said certain state’s attorneys have been requesting a tool like this.

Police and local state’s attorneys will continue to have discretion on whether they charge a business with a misdemeanor.

Because it’s classified as “emergency” in nature, the rule change took effect as soon as it was filed Friday.

Legislators who sit on a bipartisan rule oversight body will have the opportunity to review the rule on Wednesday. Eight of the 12 members of the Joint Committee on Administrative Rules would have to vote to reject it – a rarity.

Otherwise the rule will remain in place for the next 150 days.

Spillane said making the misdemeanor change by rule is the “cleanest” route, given that the administration can withdraw it as soon as it’s no longer needed, such as when Illinois moves to a phase of the reopening plan where dine-in customers are once again allowed.

“The rule making process is more nimble” than the General Assembly and governor passing a law, Spillane said.

Such a law would have to be “quite elaborate,” especially since it “would be irrelevant hopefully in the coming literal month.”

But Wheeler said with the legislature meeting next week, it’s an overreach by the executive branch to not have such a drastic and controversial change vetted by an equal branch of government.

Note: This story has been updated to include comments from House Republican Leader Jim Durkin and Senate Minority Leader Bill Brady.