Video: U.S. Sen. Dick Durbin appears on “Chicago Tonight” via Zoom to discuss reopening the country and the next stimulus bill.

WASHINGTON (AP) — The U.S. government’s top infectious disease expert issued a blunt warning Tuesday that cities and states could “turn back the clock” and see more COVID-19 deaths and economic damage alike if they lift coronavirus stay-at-home orders too fast — a sharp contrast as President Donald Trump pushes to right a free-falling economy.

“There is a real risk that you will trigger an outbreak that you may not be able to control,” Dr. Anthony Fauci warned a Senate committee and the nation as more than two dozen states have begun to lift their lockdowns as a first step toward economic recovery.

The advice from Fauci and other key government officials — delivered by dramatic, sometimes awkward teleconference — was at odds with a president who urges on protests of state-ordered restraints and insists that “day after day, we’re making tremendous strides.”

Trump, whose reelection depends to a substantial degree on the economy, talks up his administration’s record with the virus daily.

Underscoring the seriousness of the pandemic that has reached Congress and the White House, Fauci and other experts testified from their homes. Committee Chairman Lamar Alexander chaired the hearing from the study in his cabin in Tennessee, although several committee members attended in person in an eerily empty Capitol Hill chamber, masked and sitting 6 feet apart.

The tension in balancing people’s safety from the virus, which is still surprising doctors with the sneaky ways it can kill, against the severe economic fallout is playing out in many other countries, too. Italy partially lifted lockdown restrictions last week only to see a big jump in confirmed COVID-19 infections in its hardest-hit region. And Lebanon relaxed a national lockdown late last month but said Tuesday the restrictions are being reinstated for the rest of the week after a spike in reported infections.

More infections and deaths are inevitable as people again start gathering, but how prepared communities are to stamp out those sparks will determine how bad the rebound is, Fauci told the Senate Health, Education, Labor and Pensions Committee. 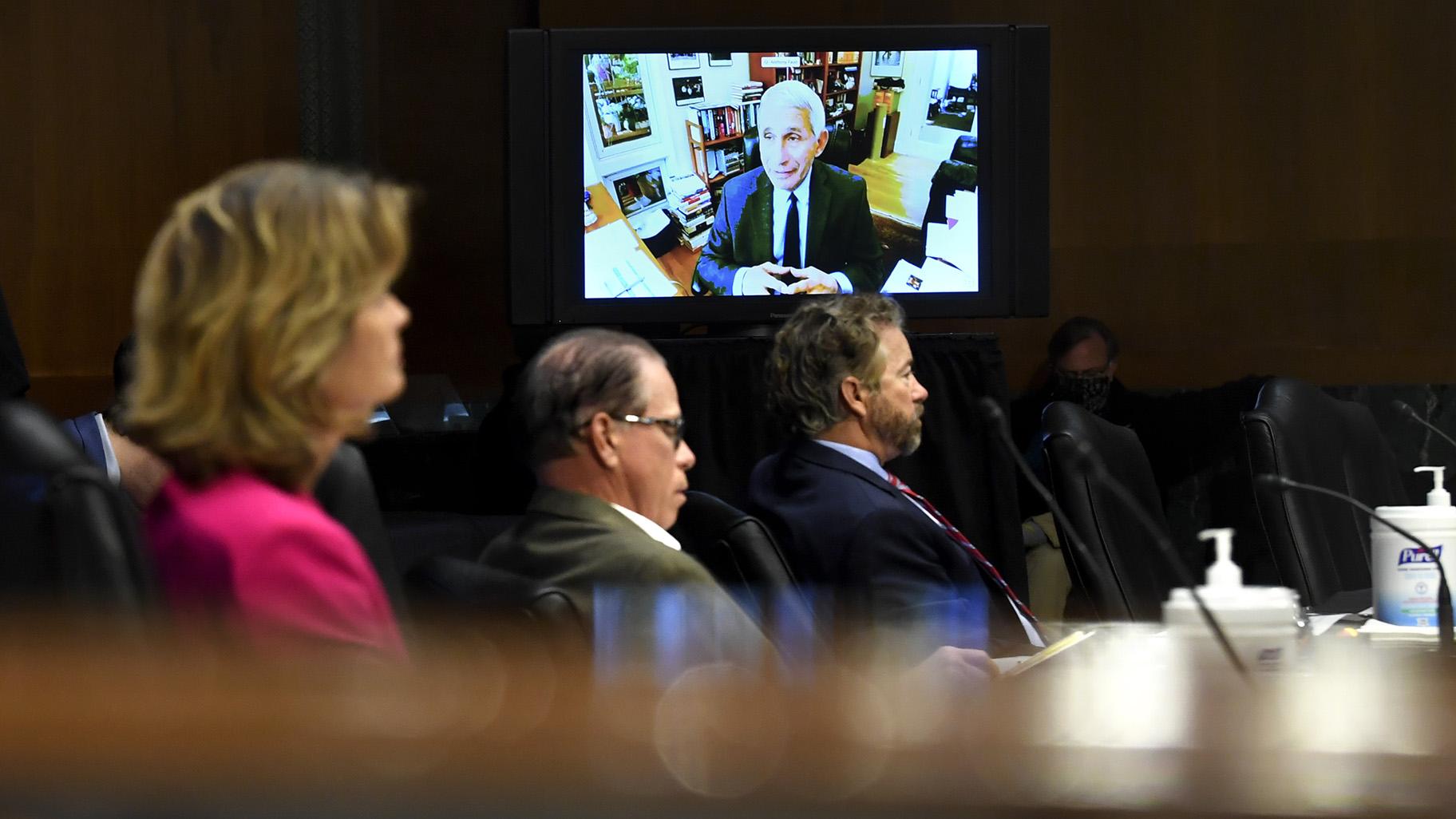 Senators listen as Dr. Anthony Fauci, director of the National Institute of Allergy and Infectious Diseases, speaks remotely during a virtual Senate Committee for Health, Education, Labor, and Pensions hearing, Tuesday, May 12, 2020 on Capitol Hill in Washington. (Toni L. Sandys / The Washington Post via AP, Pool)

“There is no doubt, even under the best of circumstances, when you pull back on mitigation you will see some cases appear,” Fauci said.

Move too quickly and “the consequences could be really serious,” he added. It not only would cause “some suffering and death that could be avoided, but could even set you back on the road to try to get economic recovery.”

With more than 30 million people unemployed in the U.S., Trump has been pressuring states to reopen.

A recent Associated Press review determined that 17 states did not meet a key White House benchmark for loosening restrictions — a 14-day downward trajectory in new cases or positive test rates. Yet many of those have begun to reopen or are about to do so, including Alabama, Kentucky, Maine, Mississippi, Missouri, Nebraska, Ohio, Oklahoma, Tennessee and Utah.

Of the 33 states that have had a 14-day downward trajectory, 25 are partially opened or moving to reopen within days, the AP analysis found. Other states that have not seen a 14-day decline, remain closed despite meeting some benchmarks.

Fauci expressed optimism that eventually vaccines will arrive, along with treatments in addition to the one drug that so far has shown a modest effect in fighting COVID—19. But it would be “a bridge too far” to expect them in time for fall when schools hope to reopen, he said.

For now, “all roads back to work and back to school go through testing,” said Alexander, the Republican committee chairman.

Although Trump declared this week, “we have met the moment, and we have prevailed” in increasing and improving virus testing, Republican senators on the panel were noticeably less sanguine.

A lack of testing has dogged the U.S. response from the beginning, when a test developed by the Centers for Disease Control and Prevention ran into numerous problems. Utah Sen. Mitt Romney said the U.S. may finally have outpaced testing leader South Korea but that country has far fewer deaths because it started testing early.

“I find our testing record nothing to celebrate whatsoever,” Romney said.

And a test only tells if someone is infected that day — they could catch the virus the next day. Pushed by Alexander on how the nation’s 100,000 schools and 5,000 colleges could reopen in August, Giroir expressed confidence there would be enough tests for schools to devise safe strategies, perhaps by testing a certain number of students every few days.

Worldwide, the virus has infected nearly 4.2 million people and killed over 287,000 — more than 80,000 deaths in U.S. alone, the world’s highest toll. Fauci said U.S. deaths likely are higher than the official count.

While Fauci has become the trusted science voice for millions of Americans, Sen. Rand Paul expressed frustration with his cautions. The Kentucky Republican said Fauci was not the “end all” in knowledge about the coronavirus and it’s “kind of ridiculous” to suggest children shouldn’t go back to school — something Fauci never said.

“We don’t know everything about this virus and we really better be pretty careful, particularly when it comes to children,” Fauci said.

While children do seem less susceptible, doctors in New York are investigating about 100 youngsters whose COVID-19 may be linked to a rare and dangerous inflammatory reaction. Three have died.

COVID-19 is devastating nursing homes as well, with infections and deaths soaring among residents and their caregivers.

“If we are able to get masks to everybody in the White House, I hope we can get masks to every nursing home employee who needs it,” said Sen. Maggie Hassan, D-N.H., who also asked why those vulnerable populations were having a hard time getting tested when employees in contact with Trump get a daily test.

The White House recently recommended that states test all nursing home residents and staff within the next two weeks.

Sen. Chris Murphy, D-Conn., blasted the Trump administration for “criminally vague” guidance on how states can safely reopen their economies. He pressed CDC Director Robert Redfield on why detailed recommendations prepared by agency experts had been shelved, as reported by The Associated Press. Redfield replied that those recommendations should appear on the agency’s website soon.