Video: Video: Elijah Brewer and Jacob Robbins give us their assessment of the country’s future economic prospects on “Chicago Tonight.”

The president, fielding questions from Americans Sunday night in a virtual town hall from the Lincoln Memorial, acknowledged valid fears on both sides of the issue. Some people are worried about getting sick; others are reeling from lost jobs and livelihoods.

Trump increased his projection for the total U.S. death toll to as many as 100,000 — up from the 60,000 figure he suggested just a few weeks ago. More than 68,000 Americans are confirmed dead from the virus, according to a Johns Hopkins database.

The White House, meanwhile, was dismissing a report that the administration was projecting the daily death toll to grow once social distancing is relaxed. The New York Times reported Monday that it had reviewed a document projecting the toll will reach about 3,000 on June 1. It also forecasts 200,000 new cases each day by the end of the month.

“This is not a White House document nor has it been presented to the Coronavirus Task Force or gone through interagency vetting,” said White House deputy press secretary Judd Deere. “This data is not reflective of any of the modeling done by the task force or data that the task force has analyzed.”

Administration officials said the projections assumed that states resumed normal activities immediately, not according to the phased guidelines unveiled by the White House last month.

After more than a month of being cooped up at the White House, Trump returned from a weekend at the Camp David presidential retreat in Maryland for the virtual town hall hosted by Fox News Channel.

The president said of his monumental backdrop: “We never had a more beautiful set than this.”

As concerns mount about his reelection bid, Trump stuck to his relentlessly optimistic view of the nation’s ability to rebound soon.

“It is all working out,” Trump said. “It is horrible to go through, but it is working out.” 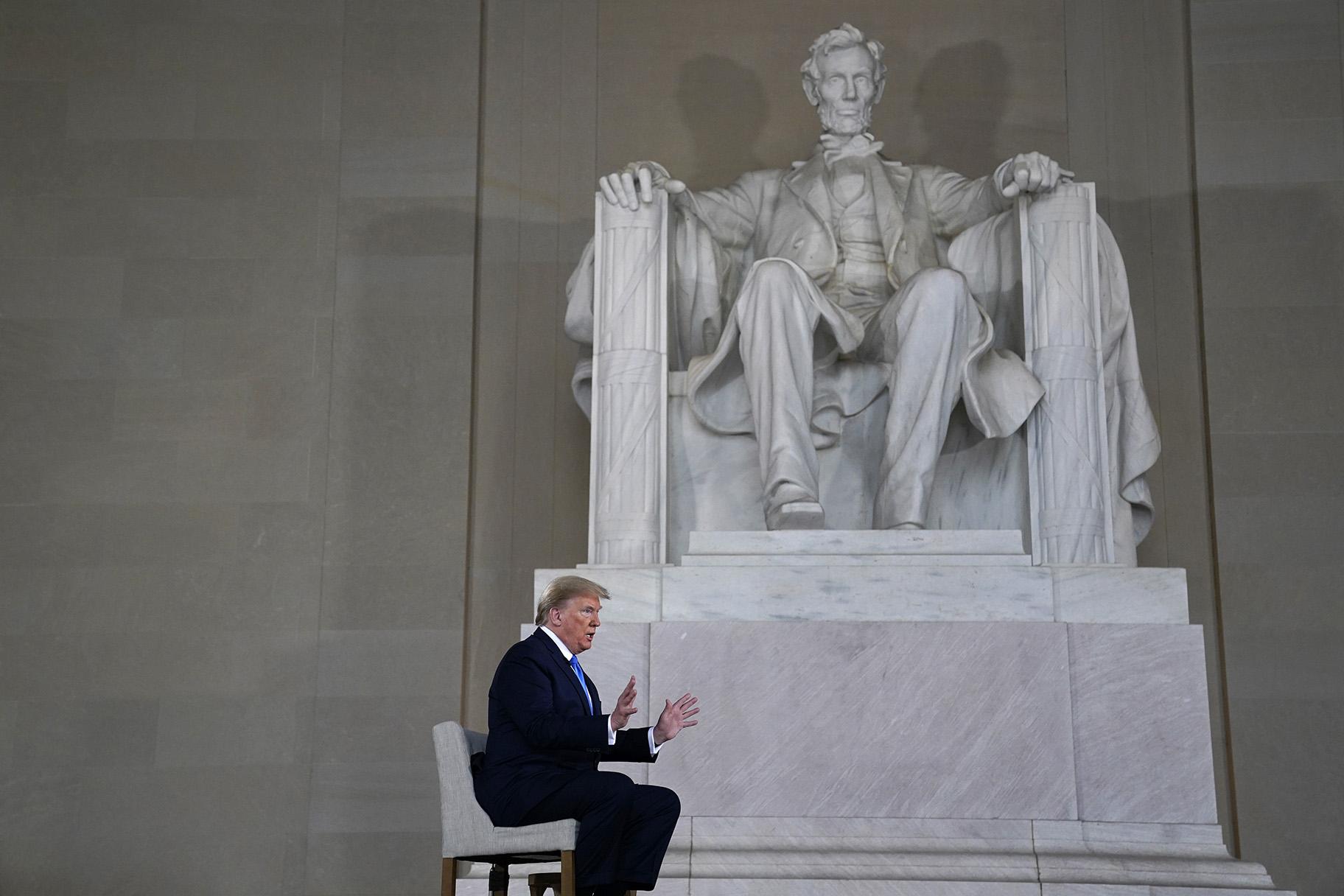 Many public health experts believe the nation cannot safely reopen fully until a vaccine is developed. Trump declared Sunday that he believed one could be available by year’s end.

U.S. public health officials have said a vaccine is probably a year to 18 months away. But Dr. Anthony Fauci, the nation’s leading expert on infectious diseases and member of the White House coronavirus task force, said in late April that it is conceivable, if a vaccine is soon developed, that it could be in wide distribution as early as January.

Though the administration’s handling of the pandemic, particularly its ability to conduct widespread testing, has come under fierce scrutiny, the president tried to shift the blame to China and said the U.S. was ready to begin reopening.

“I’ll tell you one thing. We did the right thing and I really believe we saved a million and a half lives,” the president said. But he also broke with the assessment of his senior adviser and son-in-law, Jared Kushner, saying it was “too soon to say” the federal government had overseen a “success story.”

While noting that states would go at their own pace in returning to normal, with ones harder hit by the coronavirus going slower, Trump said that “some states, frankly, I think aren’t going fast enough.” He singled out Virginia, which has a Democratic governor and legislature. And he urged the nation’s schools and universities to return to classes this fall.

Debate continued over moves by governors to start reopening state economies that tanked after shopping malls, salons and other nonessential businesses were ordered closed in attempt to slow a virus that has killed more than 66,000 Americans, according to a tally of reported deaths by Johns Hopkins University.

The U.S. economy has suffered, shrinking at a 4.8% annual rate from January through March, the government estimated last week. And roughly 30.3 million people have filed for unemployment aid in the six weeks since the outbreak forced employers to shut down and slash their workforces.

The president’s advisers have nervously watched Trump’s support slip in a number of battleground states and he was told last month that if the election were held that day, he would lose to Democrat Joe Biden. The president’s aides believe restarting the economy, even with its health risks, is essential to a victory in November and are pushing for him to pivot away from discussions about the pandemic and onto an American comeback story.

To that end, Trump will begin traveling again, with a trip to a mask factory in Arizona planned for Tuesday. The president also is set to speak in June at commencement for the U.S. Military Academy at West Point. Returning to campus for commencement will require graduates to self-isolate for 14 days, but Trump insisted the event poses no risk to the cadets.

The town hall, which included an appearance by Vice President Mike Pence, included a rare mea culpa: The vice president said he should have worn a face mask during a visit last week to Minnesota’s Mayo Clinic. Pence’s failure to wear a mask violated the clinic’s guidelines and drew significant criticism.

Elsewhere in Washington, the Senate planned to reopen Monday, despite the area’s continued status as a virus hot spot and with the region still under stay-at-home orders. The House remains shuttered as debate continues on what the next stage of the economic recovery may look like.

State and local governments are seeking up to $1 trillion in coronavirus costs, which has been met with some objections by congressional Republicans.

Trump said that while he thought common ground could be found with Democrats over an infrastructure package, “we’re not doing anything unless we get a payroll tax cut. That is so important to the success of our country.”

The leaders of California and Michigan are among governors under public pressure over lockdowns still in effect while states such as Florida, Georgia and Ohio are reopening.

Trump on Sunday night singled out Michigan Gov. Gretchen Whitmer and Washington Gov. Jay Inslee, also a Democrat, for criticism even as he praised the federal coordination with most governors. He also complained that some Democrats would rather “people get sick” than given him any credit for pushing the use of a malaria drug for treating COVID-19, though it has not been proven to be safe and effective for that use.