A onetime tree nursery became a bucolic place of rest and recovery for tuberculosis patients on Chicago’s North Side. Geoffrey Baer shares this story of a decadeslong battle against a contagion.

In 1929 through the early 1930s, my grandmother was a patient at the Chicago Municipal Tuberculosis Sanitarium. What year did the sanitarium first open and what year did it close?

Today the property is called North Park Village and it’s part of the Chicago Park District on the Northwest Side. (It’s also a neighbor of WTTW’s — the property is just north of our studios.) But from 1915 to 1974, it was the Chicago Municipal Tuberculosis Sanitarium. The historic buildings and beautiful grounds were home to hundreds of patients.

Tuberculosis is a highly contagious bacterial disease that mainly affects the lungs and, like the coronavirus, is spread by droplets. Throughout human history, TB has been the most deadly disease and it still is today. It’s curable with antibiotics, but in 2018, 10 million people worldwide contracted it and 1.5 million people died of it according to the World Health Organization.

The site of the sanitarium had previously been owned by a Swedish immigrant named Pehr Peterson. He bought and developed the land as a tree nursery in the 1850s. Peterson had apprenticed in landscaping on the estates of noblemen in Sweden.

In Chicago, he developed a method for transplanting very large trees. His nursery provided most of the trees for Chicago’s tree-lined streets, parks and even the World’s Columbian Exposition of 1893, after which the King of Sweden knighted him.

When Peterson died in 1903, his family gave 160 acres of the land to the city to be used for a municipal tuberculosis sanitarium, which opened 12 years later in 1915.

Dr. John Dill Robertson, the city’s public health commissioner, reported finding high rates of TB infection in workplaces like the post office, telephone company, restaurants and hotels, and candy factories. He also found that more than a quarter of inmates at the Cook County Jail were infected.

Among other remedies, Robertson urged widespread testing to bring the contagion to heel.

With no effective drug treatment it was believed that the best way to cure people was to get them out into wide open spaces and fresh air. At the time, the location of the sanitarium was the very edge of the city and largely undeveloped, so patients were able to isolate away from the rest of the population in a self-contained community with residences, an auditorium, maternity ward, farmland and greenhouses. 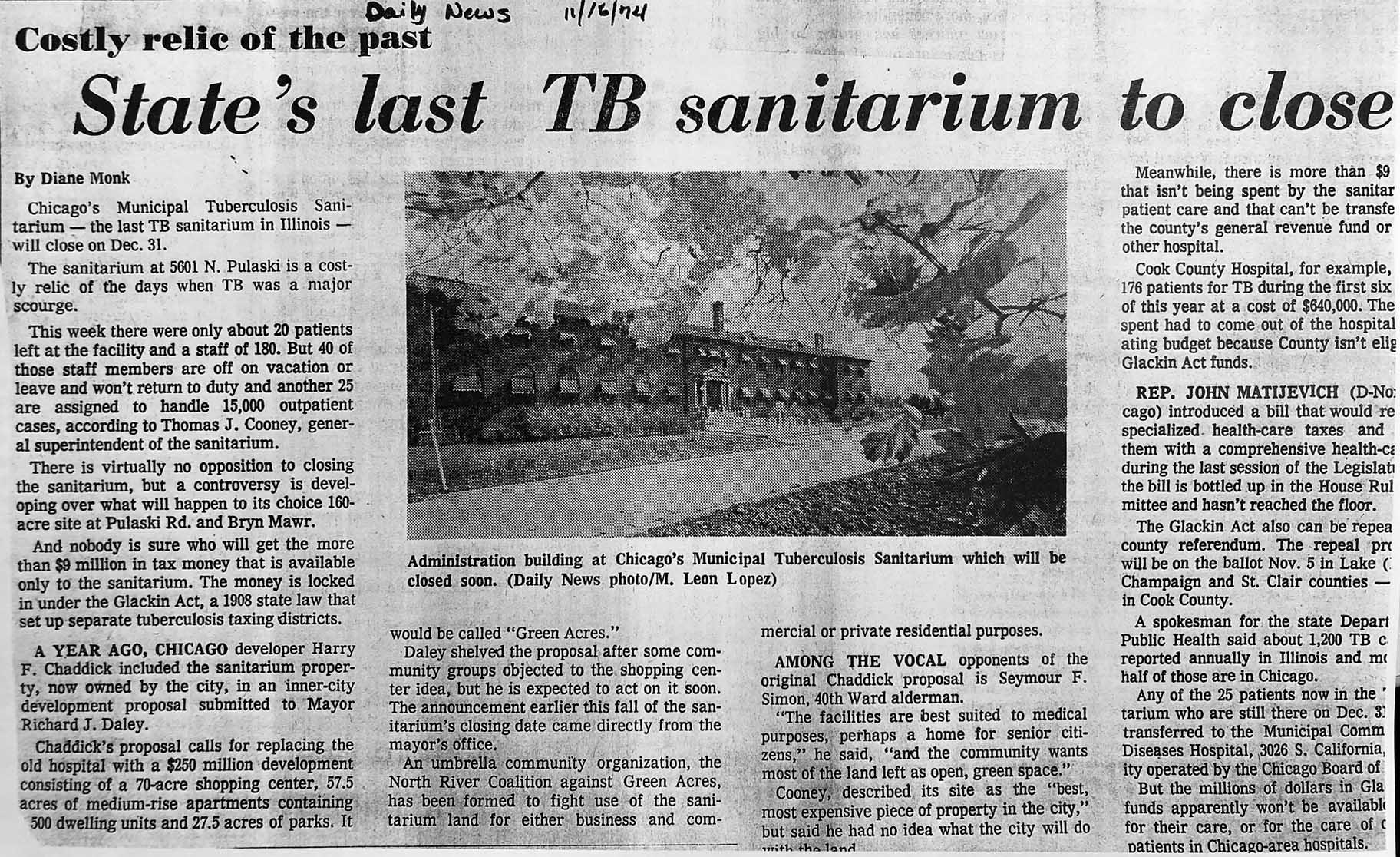 By the 1950s and ‘60s, advances in public hygiene and medicine reduced the incidence of TB so drastically that the sanitarium became obsolete. In 1974, the few remaining patients were transferred to private hospitals and the sanitarium was phased out of existence. 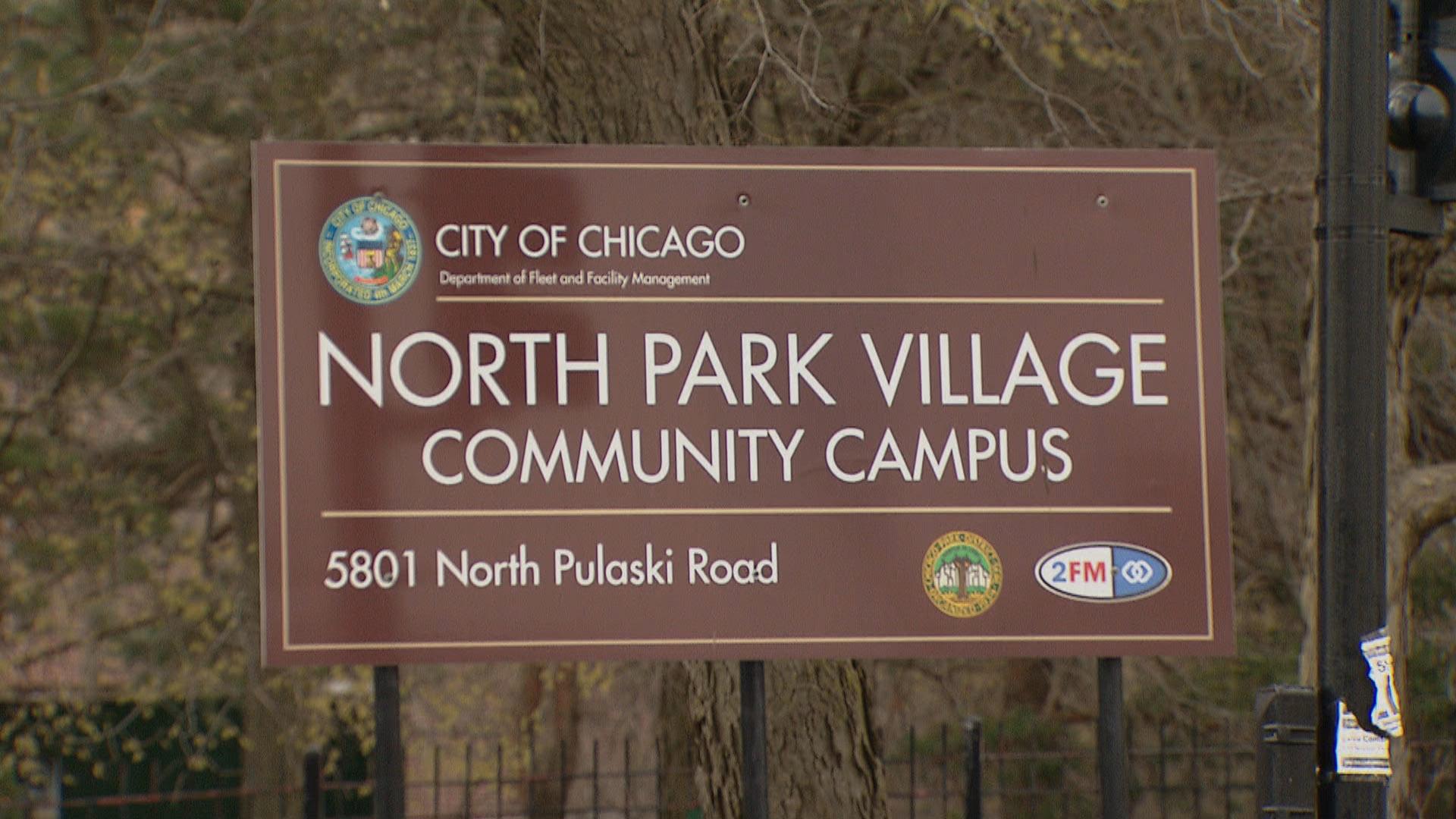 Public opposition killed that deal, and instead the city converted the land to North Park Village and Peterson Park. The old morgue and autopsy room is the Park District field house. The crematorium is now the boiler room; the old auditorium is now a fantastic gymnastics center. Housing for more than 800 senior citizens is in the old hospital. There are athletic fields and playgrounds, a high school for the developmentally disabled called North Side Learning Center on the Bryn Mawr side, and a 50-acre nature preserve with hiking trails, prairies, wetlands, and a nature center rounds out the rest of the property.