Have You Heard About the Ultra-Hot Planet Where it Rains Iron? It’s Our New Obsession 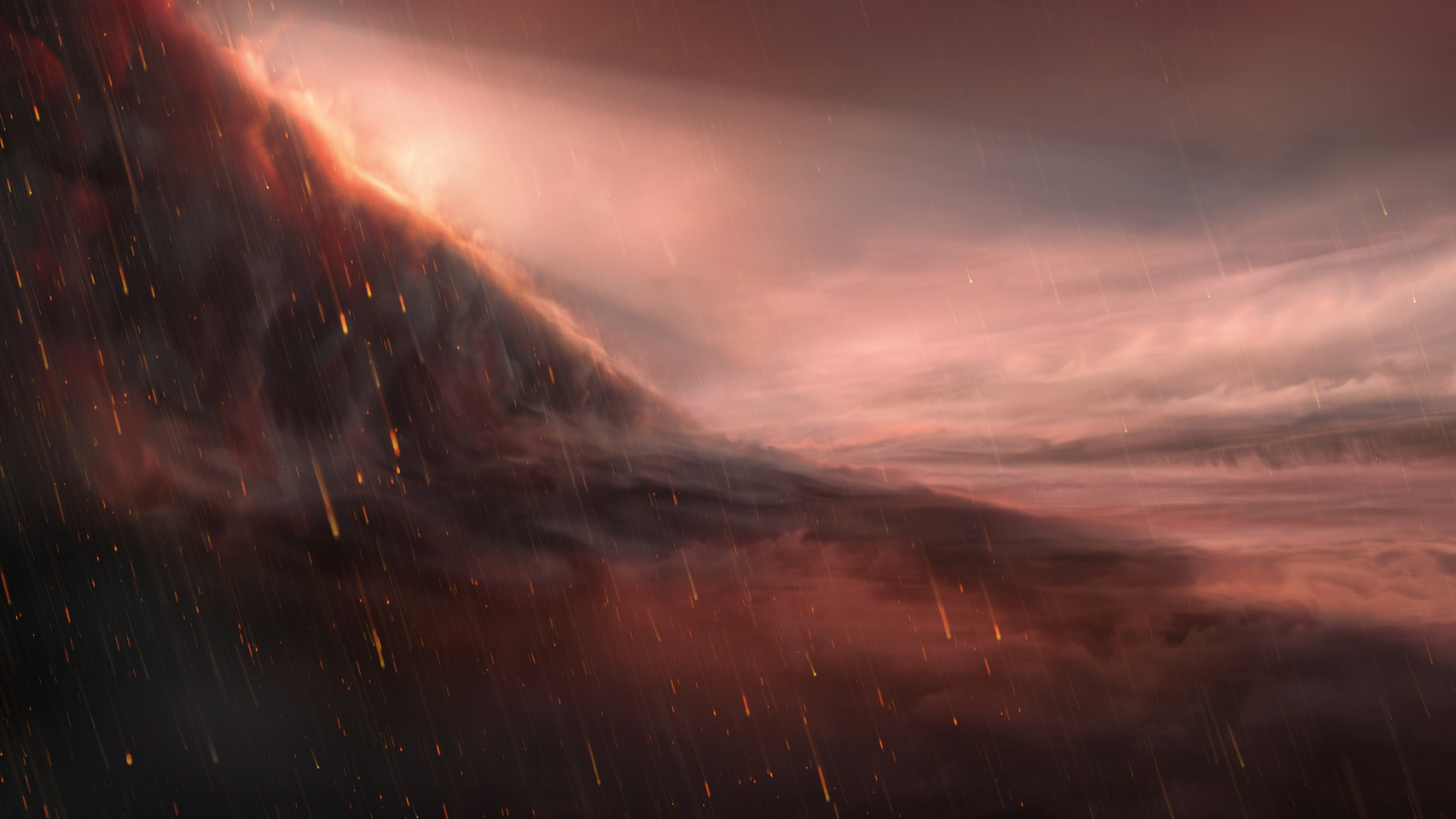 This illustration shows a night-side view of the ultra-hot giant exoplanet WASP-76b, where temperatures are high enough to vaporise metals. Strong winds carry iron vapour to the cooler night side where it condenses into iron droplets. To the left is the evening border, where the planet transitions from day to night. (ESO / M. Kornmesser)

Think things are bleak on planet Earth? At lease it’s not raining metal.

That’s the kind of bizarre climate scientists recently observed on an ultra-hot exoplanet they’ve dubbed WASP-76b, located 640 million light-years away in the constellation Pisces. (Exoplanets are planets that orbit stars other than our own sun.)

Using the Very Large Telescope — an actual technical term — positioned in Chile’s Atacama Desert, researchers made some amazing discoveries about this extreme planet, like that fact that temperatures soar above 4,300 degrees Fahrenheit. That’s hot enough to vaporize metals, which explains the high concentration of iron in the atmosphere of WASP-76b, a gas giant twice as wide as Jupiter.

High winds whip those iron molecules from the planet’s day side to its “cooler” night side (a relatively balmy 2,700 degrees), where they condense into droplets of iron rain. Sounds horrifying and badass at the same time.

For a planet with so much swagger, WASP-76b doesn’t seem rock ‘n’ roll enough as a moniker. We thought of Stark (for Tony “Iron Man” Stark) or Ogun, the god of iron in the Yoruba religion, but it turns out, the job of giving celestial bodies a proper name isn’t up for grabs. It’s the province of the International Astronomical Union, which oversees a process that can take years.

The IAU made 224 exceptions in 2019, in celebration of the organization’s 100th anniversary. Countries around the world were given the opportunity to name an exoplanet and its host star, with many drawing on ancient history or cultural mythology for inspiration. The U.S. was assigned HD-17156 and chose Nushagak for its star and Mulchatna for the exoplanet, both referencing salmon rivers in Alaska that have been fished for centuries by indigenous people.

Normally, discoverers of exoplanets have first dibs on suggesting names, for 10 years following confirmation of the object. In the case of the “iron rain” planet, which was first detected four years ago, WASP-76b is a placeholder. It stands for Wide Angle Search for Planets, an array of cameras that’s discovered more than 150 exoplanets. A number of WASP planets were included in IAU’s 2019 name-palooza: Thailand, for example, chose Chaophraya and Maeping for WASP-50 and WASP-50b (the “b” is for the exoplanet versus the star).

On the off chance the IAU throws open the doors to civilian suggestions before its 200th anniversary, start brainstorming.