A Disconnect Between Trump and Health Officials on Coronavirus 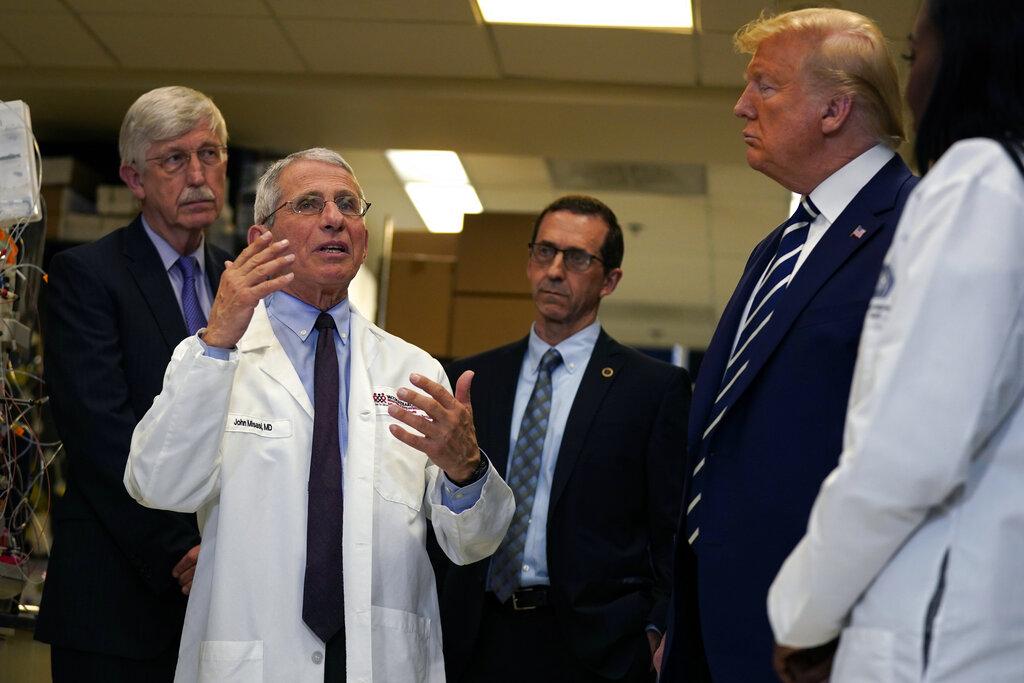 WASHINGTON (AP) — Whom to believe on the coronavirus threat — the president saying one thing or the public health officials standing beside him and saying something a little different?

President Donald Trump’s breezy talk Tuesday of a virus that’s “got the world aflutter” contrasts with the gravity and caution conveyed by federal scientists as Americans look to the government not just for reassurance, but for realism.

Public-health leaders are walking a fine line in laying out the facts without angering a president who speaks in rosier tones than they do about a contagion that’s infected more than 100 people from coast to coast.

No, the scientists say, a vaccine is not just around the corner, although Trump has repeatedly suggested it is. Yes, they say, the U.S. appears to be more prepared than some other countries afflicted or threatened by the virus, but it’s too early to know how the plans will hold up. No, a “cure” is not in the offing for an infectious disease for which there is no treatment.

For days, Trump has talked up prospects for driving the new coronavirus away in short order. He has reserved some of his strongest words of concern for the economy as the stock market — the principal talking point for his reelection effort — has zigzagged like a fever chart. He has said a vaccine may be available “relatively soon,” a treatment sooner and even a cure may be possible.

Intent on calming the waters, Trump last week spoke of virus cases in the U.S. “going very substantially down, not up,” as health officials tracked the numbers actually going up. And he said all initially identified victims were recovering, when at least four were seriously ill.

Since then, the disconnect has continued between Trump’s aggressive optimism and the measured words of the federal health bureaucracy in sizing up the coronavirus risk.

“It’s got the world aflutter but it’ll work out,” Trump told a meeting of the National Association of Counties on Tuesday.

En route to the National Institutes of Health in suburban Maryland, Trump held to his view that the spread of the virus across the U.S. isn’t “inevitable at all,” a stance at odds with that of government scientists.

Republican Sen. Lamar Alexander, chairman of the Senate health committee, agreed with many Democrats in asserting that the nonpolitical public-health officials are the ones who should be listened to.

“My advice to the president and the vice president is let the professionals do the talking,” he said.

Democrats in Congress say Trump, with his talk about an imminent vaccine and even a cure, is sugar-coating a pill that doesn’t exist.

“It is pretty extraordinary that we have to have our medicine and health professionals counter-messaging the president ... that they have to correct the record.” Sen. Chris Murphy, D-Conn., told a hearing Tuesday.

Dr. Tom Frieden, who led the Centers for Disease Control and Prevention from 2009 through 2017, said some of the difference in the messaging between Trump, who has no background in science, and the government’s medical experts “has been in the emphasis or shading.”

“You want the experts giving the expert information,” Frieden said in an interview. He said that despite Trump and Vice President Mike Pence turning themselves into the public face of the outbreak, Trump had the experts speak from the podium both times he held briefings about the virus. “That’s really important.”

Testifying before the Senate on Tuesday, Dr. Anthony Fauci of the National Institutes of Health made it clear that neither a coronavirus treatment nor a vaccine can be ready quickly. Fauci indicated potential treatments may come before a vaccine. “The timelines are fundamentally different,” he said.

Pharmaceutical company Gilead is testing a potential treatment and Fauci said, “We’ll know in a few months if it works.”

Based on data from China, Fauci said about 80% of people who get infected “do really quite well” and recover without any medical treatment. But about 10% to 15% get seriously ill, particularly those in high-risk groups such as the elderly or patients with other medical problems.

While a treatment may be identified in a matter of months, Fauci said a vaccine would take at least a year to a year-and-a-half.

Testing for a vaccine has to proceed in stages, to make sure it’s safe to use on people and that it works. “We’d be giving this to normal people to prevent infection, so you must be sure,” said Fauci, director of the National Institute of Allergy and Infectious Diseases.

Pence’s visit on Capitol Hill with Fauci and Health and Human Services Secretary Alex Azar on Tuesday did little to quell concerns from senators of both parties.

The vice president’s message was “we’re on top of it,” said Republican Sen. John Kennedy of Louisiana. But Kennedy said he’s been told conflicting information in various administration briefings, though this one was “much improved.”

Democrats said there were more questions than answers in the latest one. Senators told Pence the administration must provide accurate information to head off “confusion and panic,” said Democratic Sen. Mazie Hirono of Hawaii.

Said Alexander, the Republican chairman: “The more we listen to the head of those agencies, I think the better. Because if the administration talks too much people think that it’s taking credit. But if the Democrats talk too much they’ll think they’re playing politics.”

The new virus, first detected in China, has infected more than 90,000 people globally and caused over 3,100 deaths. Officials have found more than 100 cases and six deaths in the U.S.