Around 375 million years ago, some fish began an extraordinary transformation that would change the history of life on Earth: their fins evolved into something like limbs that enabled them to walk on land.

Key to understanding that transition was the discovery in the Canadian Arctic of the fossilized remains of a now extinct species of fish that came to be called Tiktaalik.

Tiktaalik has a flattened head that resembles that of a crocodile and fins that appear to have been sturdy enough to allow it to support its body weight on land.

University of Chicago paleontologist Neil Shubin was one three scientists who discovered the fossil in 2004 on Ellesmere Island, Nunavut, in northern Canada. 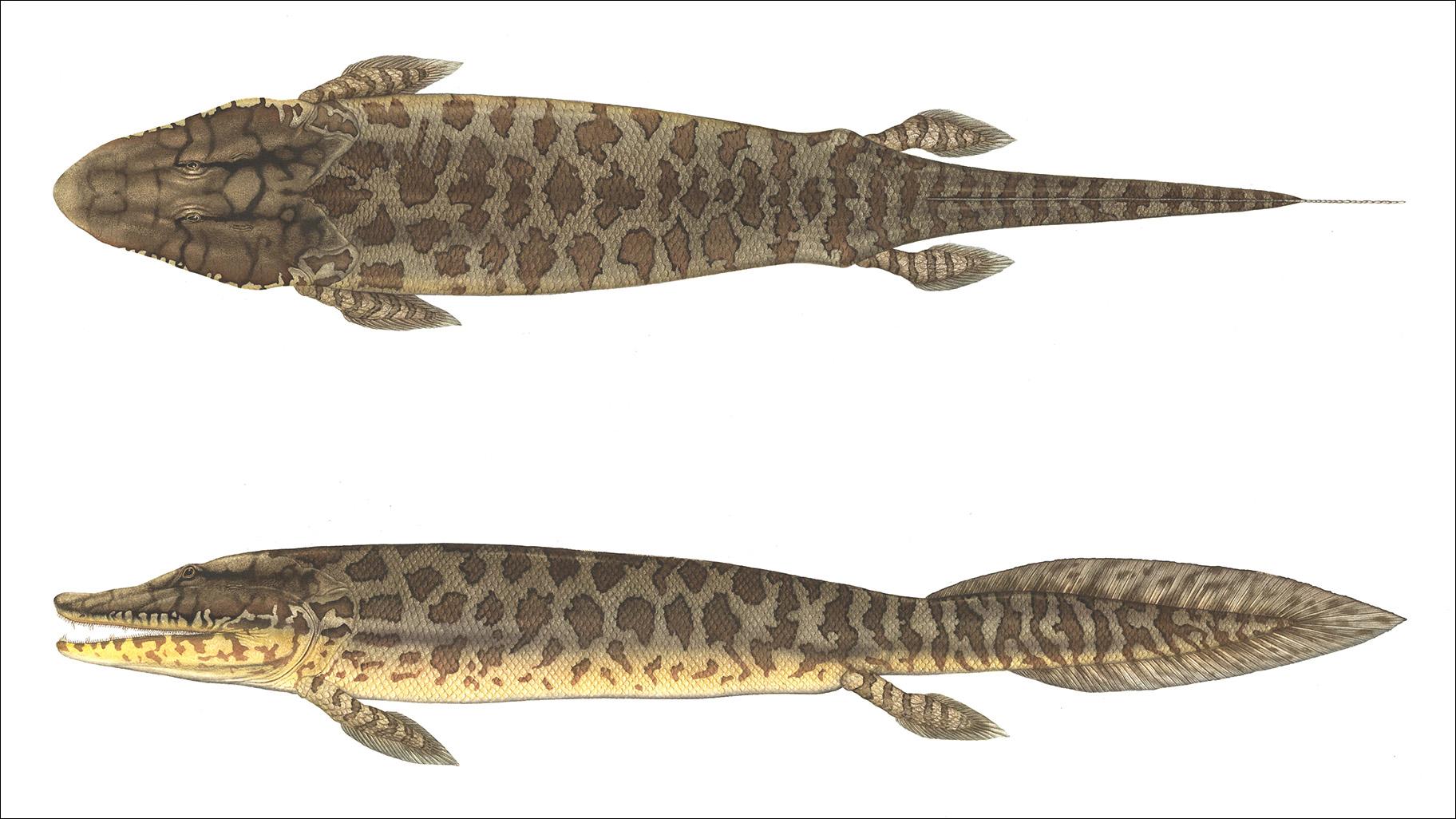 An illustration of Tiktaalik by Flick Ford. (Courtesy of the University of Chicago)

“My team and I were looking for places in the world to find an intermediate between fish that live in water and creatures that walk on land. And we decided for a variety of reasons to go to the Canadian Arctic because the rocks were perfect to discover this kind of creature,” said Shubin.

And 16 years later, research by Shubin and his team continues to add to our understanding of this key transitional species – with the help of some advanced technology.

A CT scan of Tiktaalik’s fin shows its dorsal rays in yellow and ventral rays in cyan. (Courtesy Tom Stewart) Using CT scans to examine the delicate structure of fossilized fins still encased in rock, Shubin and his colleagues were able to construct 3D models of the entire fin of Tiktaalik and some of its close relatives. They then were able to use those models to infer how those fins worked and changed over time as they evolved into limbs.

“This technology wasn’t available to us in 2004 when we originally discovered Tiktaalik,” said Shubin. “What it showed us, remarkably, is that this is a fin that’s built to support the animal … And we saw all that with a CT scanner. Such that when we put this thing together we could envision how this thing actually walked.”

Shubin was the senior author of the study published last month in the Proceedings of the National Academy of Sciences. Thomas Stewart, a postdoctoral researcher at the University of Chicago, led the study.

“If you want to understand how animals were evolving to use their fins in this part of history, this is an important data set,” said Stewart.

A CT scan of a Sauripterus fin. (Courtesy Tom Stewart) While Tiktaalik is believed to have been able to support most of its weight with its fins and make short trips on land, Sauripterus and Eusthenopteron are thought to have been fully aquatic but with fins that may have enabled them to prop themselves up on the bottom of lakes and streams.

“This provides further information that allows us to understand how an animal like Tiktaalik was using its fins in this transition,” said Stewart. “Animals went from swimming freely and using their fins to control the flow of water around them, to becoming adapted to pushing off against the surface at the bottom of the water.”

But what was the evolutionary driver that led Tiktaalik to first leave the water?

Shubin says that while on land there was only insect and plant life at that time, the water was full of predators and prey.

“It was a predator-rich world,” said Shubin. “What we see is that the world at this time about 375 million years ago, in water, was a fish-eat-fish world. So what Tiktaalik was doing was avoiding the fight by going on to land where there are no real predators and no real competitors and it had a whole world to explore.”