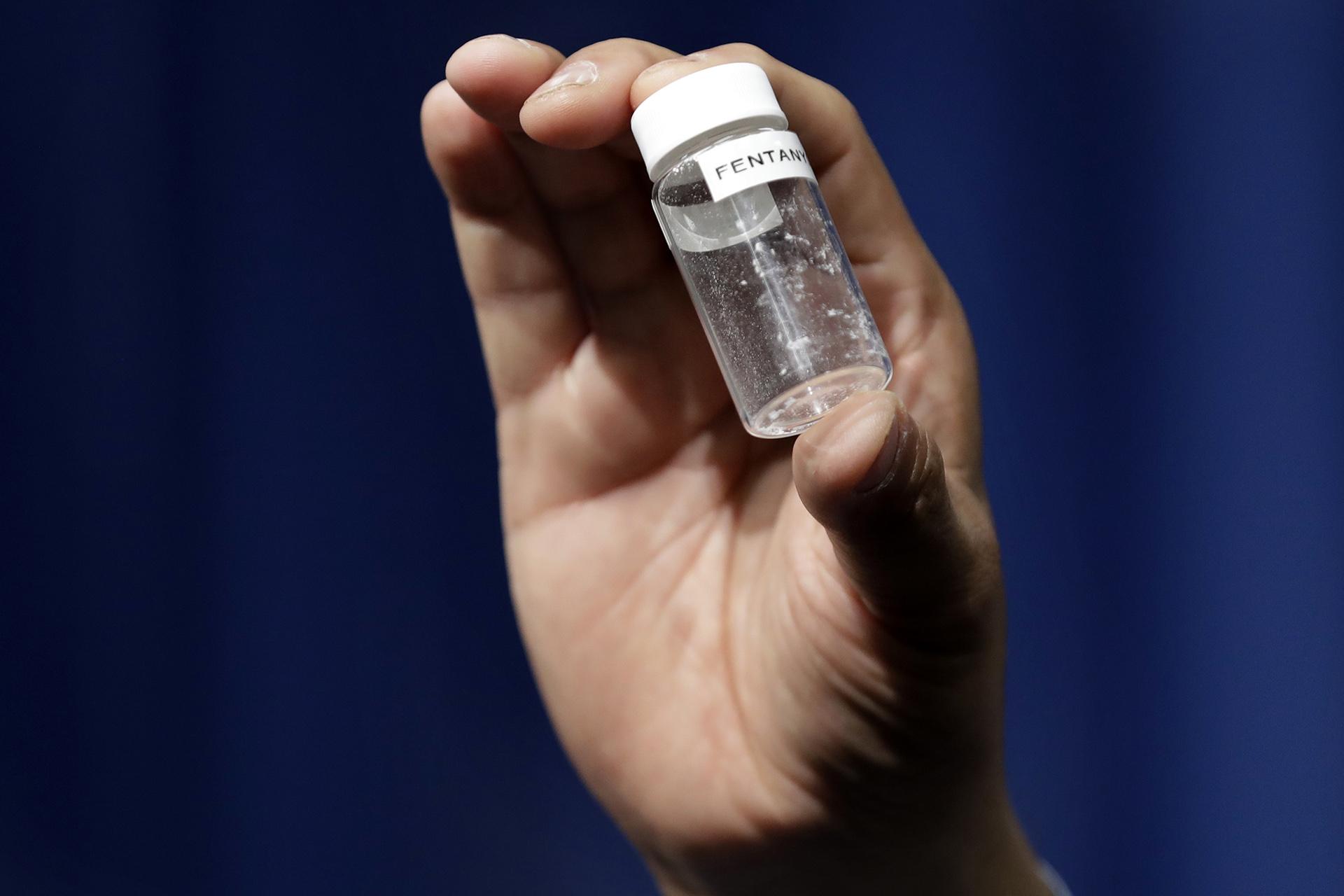 This June 6, 2017 file photo shows an example of the amount of fentanyl that can be deadly after a news conference about deaths from fentanyl exposure, at DEA Headquarters in Arlington, Virginia. (AP Photo / Jacquelyn Martin, File)

WASHINGTON (AP) — The Drug Enforcement Administration was “slow to respond” as America grappled with a rising opioid epidemic, the Justice Department’s inspector general said in a report Tuesday that faulted the agency for cutting back use of a key enforcement tool and continuing to raise production quotas even as the number of deaths rose.

“Unlike past drug crises, in combating the current opioid epidemic DEA failed to develop a comprehensive national strategy that could have focused and directed its regulatory and enforcement efforts,” the watchdog report found.

Some of the findings could bolster the claims of drugmakers and distributors who have said the government should share the blame for the crisis. The first federal trial on the crisis, dealing with claims against the drug industry from two Ohio counties, is scheduled to begin later this month in Cleveland.

Opioids, a class of drugs that includes powerful prescription painkillers such as OxyContin and Vicodin and illegal drugs including heroin and illicitly made fentanyl, have been linked to more than 400,000 deaths in the U.S. since 2000.

The report examined the DEA’s regulatory and enforcement efforts to control opioids since the crisis began to come into focus. It found that as the number of opioid-related deaths drastically increased between 2013 and 2017, the DEA significantly reduced using one of its key enforcement tools — the ability to suspend manufacturers, distributors and other registrants to keep drugs from being diverted.

The report found the agency issued a peak of 59 of those “immediate suspension orders” in fiscal year 2011. But then the number started dropping, all the way down to five in fiscal 2015. The report said part of the reason for the decline was that so many pill mills had already been shut down. But part of it was an icy relationship between different offices in the agency.

In a response included with the report, the DEA said the decline in those suspensions was also due to a decrease in opioid prescriptions and an increase in prescribers, pharmacists and others surrendering their registrations.

The report also found the DEA raised the annual quota of the amount of oxycodone that can be manufactured by nearly 400% from 2002 to 2013. In court filings, drugmakers have said that they continued to increase production as the opioid crisis deepened because the DEA said they should.

The report notes the agency had told the U.S. Government Accountability office previously that it’s difficult to set a limit that provides for legitimate medical needs and limits abuse and diversion. Since 2014, the oxycodone quota has been reduced, with the biggest cuts — of 25% — announced in 2016. The cuts have come as prescriptions have declined and fentanyl and other synthetic street drugs have become the biggest killers among opioids.

West Virginia Attorney General Patrick Morrisey, a Republican, sued in 2017 to try to force quotas down and resolved the suit last year. “Unfortunately, this mismanagement contributed to the senseless death of many Americans,” Morrisey said in a statement.

In the report, weaknesses were identified in the DEA’s registration process, which allowed manufacturers, distributors and health care providers to immediately reapply after their registration was revoked or surrendered.

The inspector general also called for the federal government to do something some states have done already: Require electronic rather than handwritten prescriptions for all controlled substances, saying that’s a way to cut down on fraud. The DEA agreed with that and most of the report’s recommendations.

In a statement, the DEA noted that it has taken steps to reduce the diversion of prescription drugs to the black market, but the agency also agreed that more changes need to be made.