Geoffrey Baer unpacks the history behind an army parade on Michigan Avenue and a 1934 record-breaking train trip from Denver to Chicago.

I found an old stereoscopic postcard in a yard sale showing a huge parade on Michigan Avenue in 1917. What can you tell me about the event? 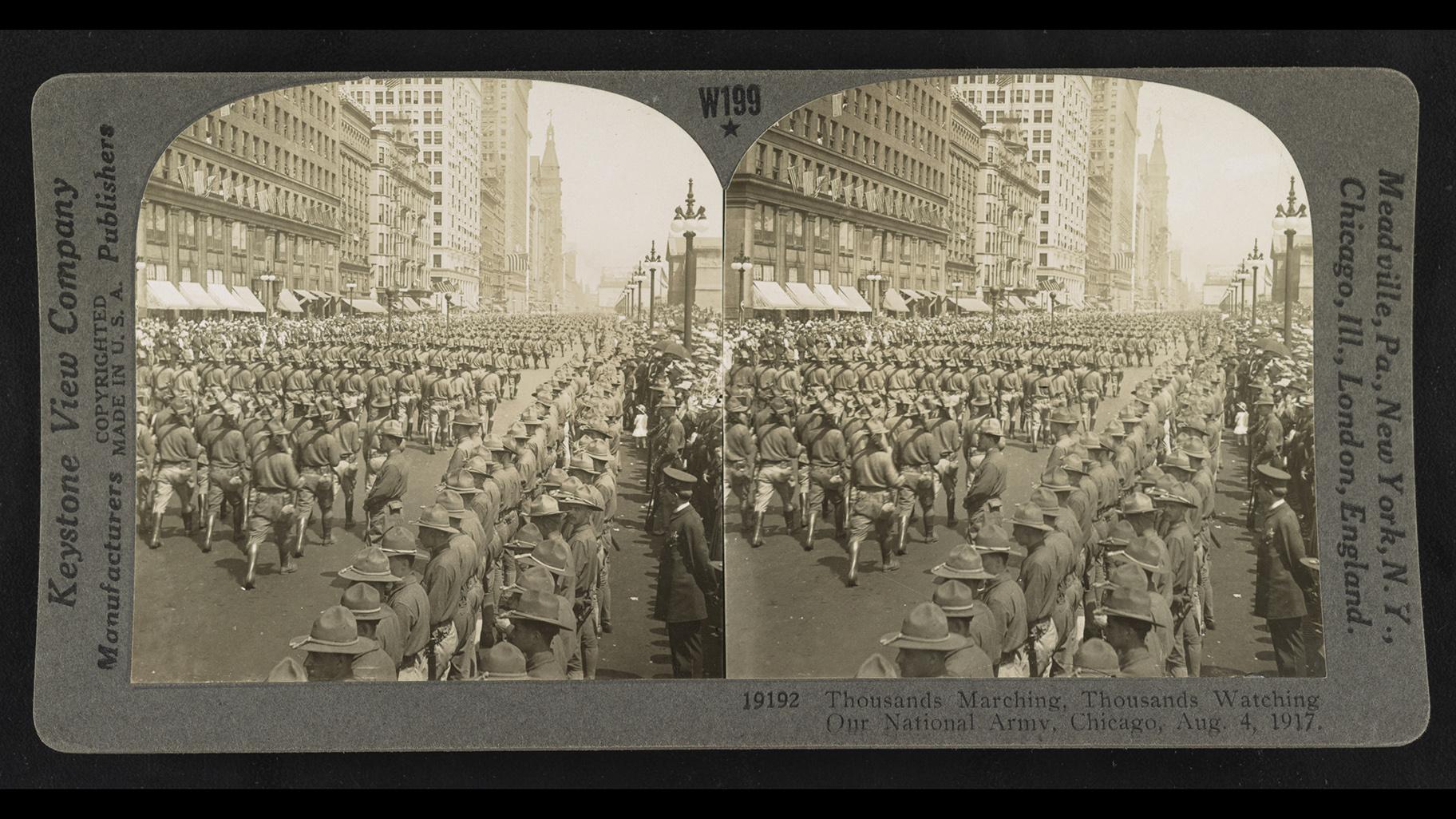 This parade was basically a massive propaganda stunt to whip up public support for the newly established policy of drafting men to serve in the army. When the United States entered World War I a few months earlier, there were only about 121,000 men in what was called the “regular army.”

The federal government authorized the Selective Service Act in May 1917, requiring all men ages 21 to 30 to register for the draft.  Those selected would be conscripted into a new so-called National Army. This was an about-face for a country that had until this point maintained a neutral position on the conflict overseas.

President Woodrow Wilson quickly authorized a campaign to win public support for the draft and the war led by something called the Committee on Public Information. The CPI flooded newsrooms with stories and sent 75,000 speakers called “four-minute men” around the country to give short speeches promoting Wilson’s war plans.

And while the event in our viewer’s photo wasn’t an official CPI event, their work almost certainly influenced it.

The parade seems to have been a home-grown event inspired by an editorial in the Chicago Tribune. After the editorial ran, a local committee formed. The paper ran ads from the committee and articles inviting men who had been drafted to march in a huge parade so the city could give them a proper send-off for their military training.

Just weeks after the editorial ran in the paper, 13,477 soon-to-be soldiers in civilian clothes marched up Michigan Avenue behind officers-in-training from Fort Sheridan. Thirty-five men whose draft number came up first were given the honor of leading the enlistees and were loudly cheered by the throngs along the street, according to the Tribune.

The reviewing stand was in front of the Art Institute where Army Major Gen. Thomas H. Barry observed the recruits. Immediately following the parade, he wrote, “No other city in the United States or in the world ever witnessed a finer sight than the parade … composed solely of young American manhood without a slacker in the bunch … woe betide those whom they go up against on the other side.”

Many years ago my grandmother gave me a framed document because she thought I may be able to use the frame. The document is the log of the Burlington Denver Zephyr world’s record nonstop run on October 23, 1936. It says that John T. Pirie was a passenger and that he is therefore a member of the “Dawn-to-Dusk Club.” What can you tell me about it? 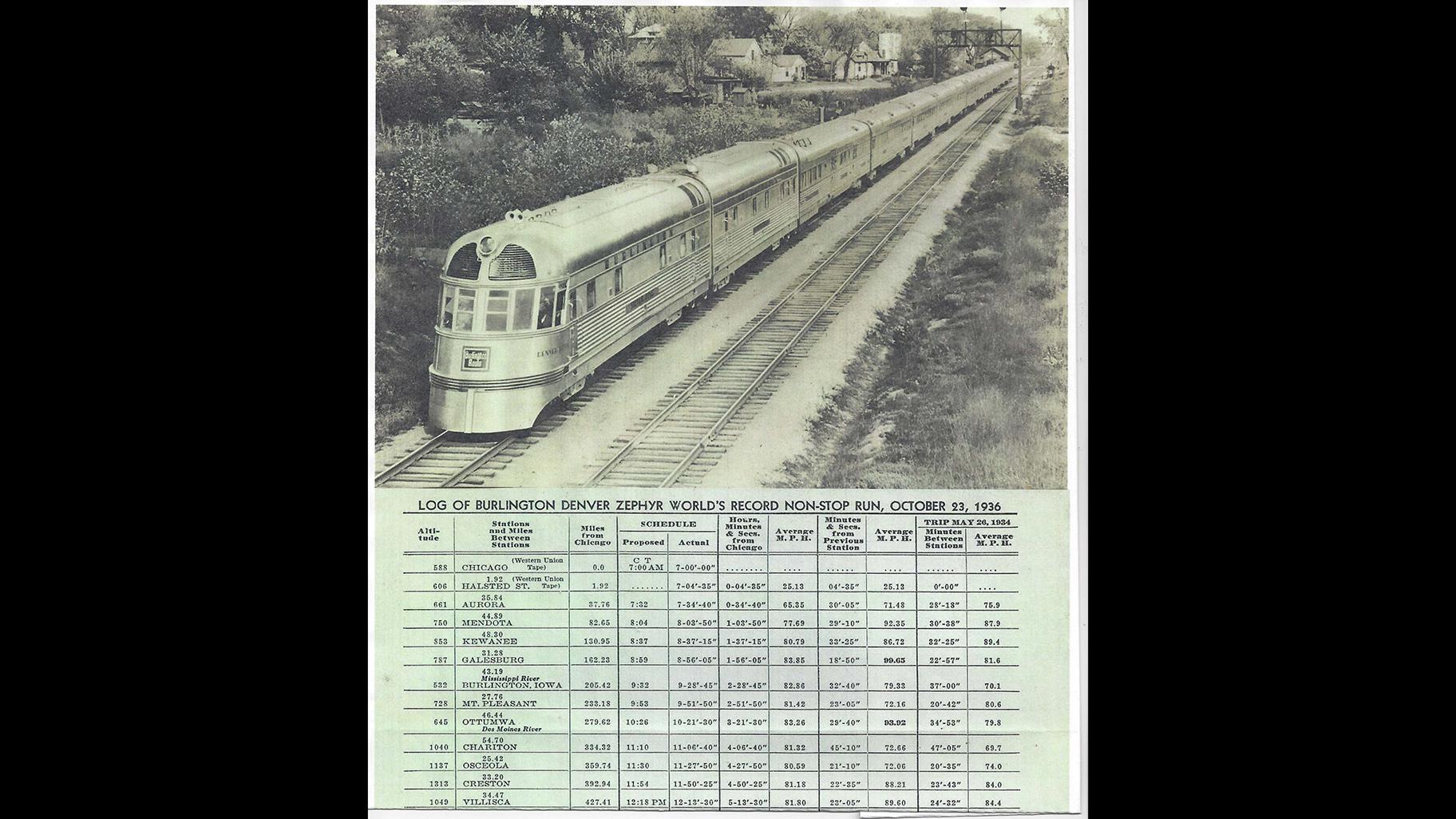 Upon first glance, this looks like the Burlington Pioneer Zephyr housed at the Museum of Science and Industry. But while it’s the same streamlined design, it’s actually a different train, the Denver Zephyr. And this particular run took place in 1936.

Some necessary context: the legendary streamliner now in Hyde Park set a record shattering Dawn-to-Dusk Run on May 16, 1934. It was a publicity stunt by the Chicago, Burlington and Quincy Railroad to demonstrate a revolutionary new kind of lightweight, high-speed train powered by a diesel engine instead of steam.

Railroads were desperate for new, efficient technology that would cut costs as ridership slumped during the Great Depression.

Burlington President Ralph Budd wanted this to be literally the last word in trains, so he scouted around for a name that started with “z.” He found inspiration in the name of the god of the west wind, Zephyrus.

The goal was to cover the distance between Denver and Chicago in 14 hours – five hours shorter than the old record set by a steam engine and nearly half the regular time of 26 hours.

The big finale to Budd’s stunt was to be the Zephyr’s triumphant arrival at the reopening of Chicago’s Century of Progress World’s Fair. The Zephyr covered 1,015 miles in just over 13 hours. 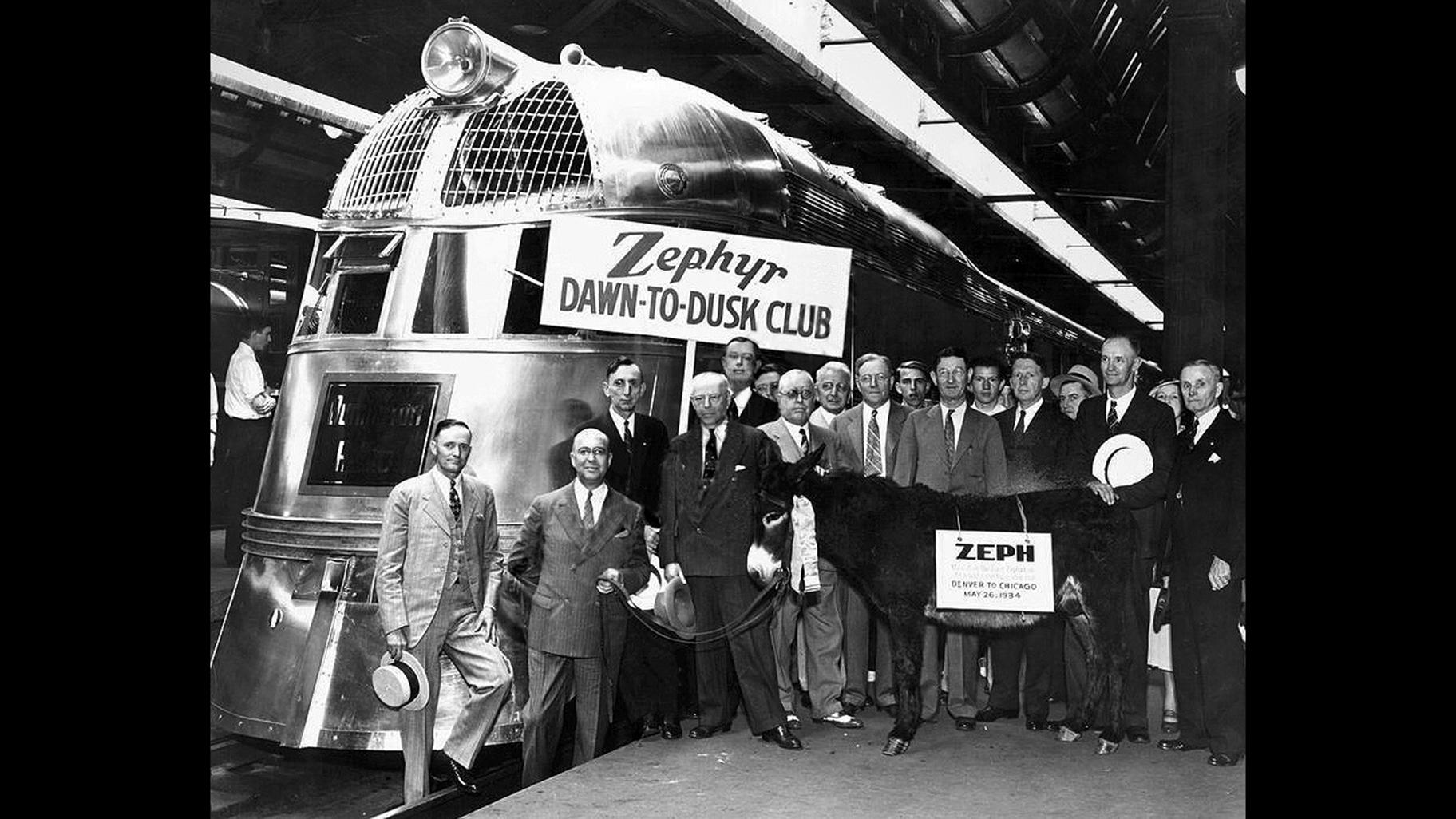 Fast-forwarding back to 1936, two new 12-car Zephyrs of the same streamlined design, but larger and more powerful, were built for regular runs between Denver and Chicago. Budd kicked off the service with yet another stunt run – to break the speed record set by the first Zephyr, which he re-christened the Pioneer Zephyr.

Passengers on the 1936 run apparently received certificates like the one our viewer sent us, which was issued to John T. Pirie, of the Carson Pirie Scott department store.

By the 1950s, the Zephyrs were largely put out of service, though the name lives on in Amtrak’s California Zephyr.