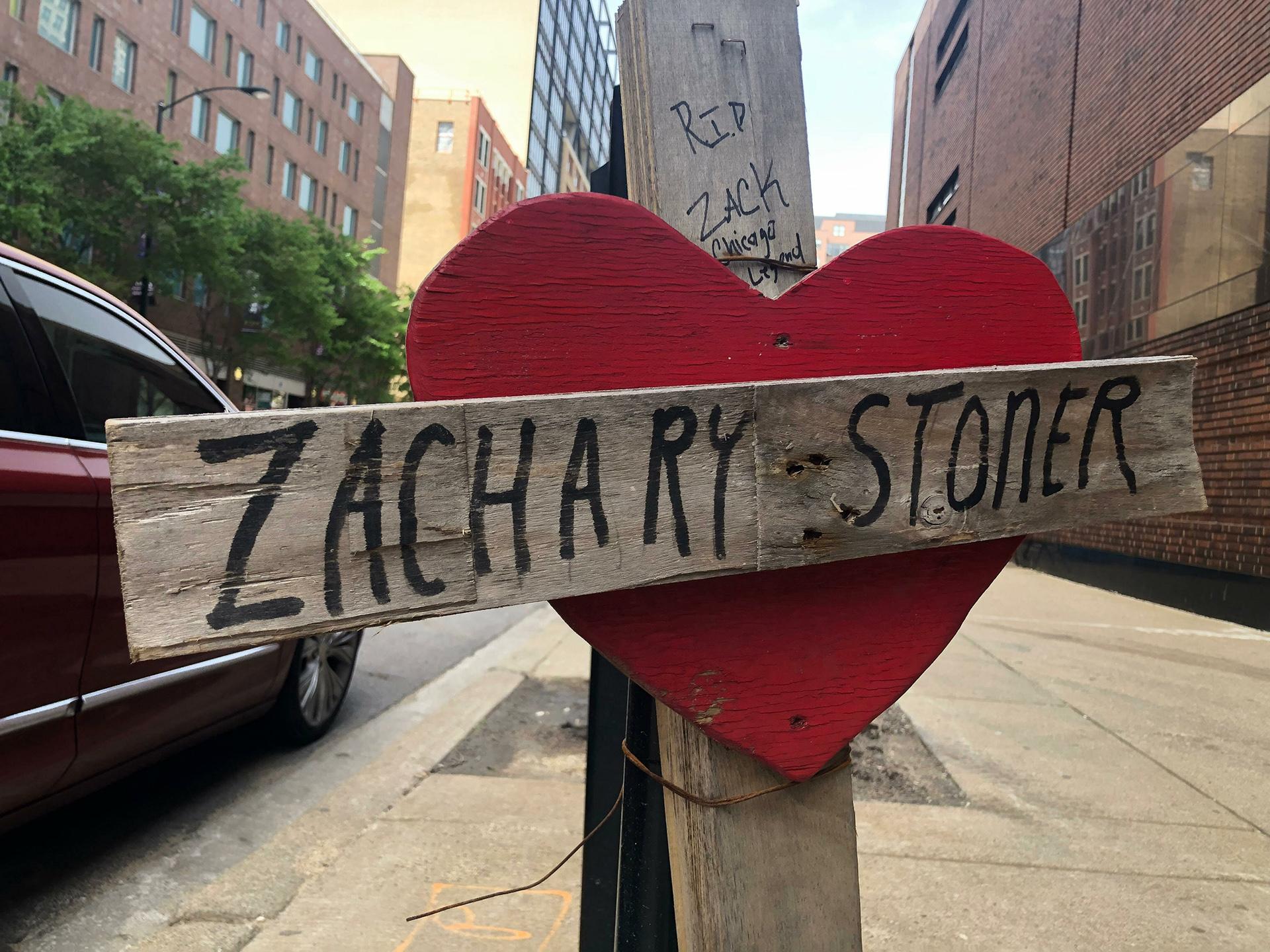 In this May 22, 2019 photo, a makeshift cross marking the spot where Zachary Stoner was killed on May 30, 2018, in a drive-by shooting in downtown Chicago. (AP Photo / Michael Tarm)

CHICAGO (AP) — A makeshift cross now marks the spot where Zachary Stoner’s bullet-riddled SUV crashed into a lamppost one year ago in downtown Chicago — with the street reporter left clinging to life with a gunshot wound to the head. A note scratched on the cross reads, “Zack: Chicago legend,” alluding to his fame in hip-hop circles and his trailblazing work in a uniquely perilous genre of gangland journalism.

The fact that police have made no arrests in Stoner’s May 30, 2018, slaying despite multiple potential witnesses and the street being lined with surveillance cameras highlights a troubling statistic about Chicago homicides: About 80% of them go unsolved within the year they occur. And with gang-related killings, the chances of someone getting away with murder are even greater.

Investigators haven’t spoken publicly about Stoner's case, but police and medical examiner documents obtained by The Associated Press through an open records request provide previously unreported details and indicate that detectives seem to have significant evidence.

Stoner, who was 30 and known by his nickname, “ZackTV,” was attending a rap concert at the Refuge nightclub just before the shooting. Footage recorded by videographer Raheem McCaskill shows Stoner smiling and mixing with people in the small, packed club. McCaskill, 24, recalled in a recent interview that gang members were among the more than 100 concertgoers.

“But everything was cool,” said McCaskill, who was inspired by Stoner and last year launched his own hip-hop and gang news site, 16 Shot Em Visualz. “I would never have expected what happened to Zack later.”

Dozens of videographers nationwide risk their lives going onto gang turf to interview gang members and aspiring rappers among them, then post the videos on YouTube. Stoner, who dubbed the field “hood CNN,” had said they reported on human-interest stories from places mainstream media were often afraid to go.

Stoner gave several rappers who were on the club stage that night their big breaks by featuring them on his ZackTV1 YouTube channel. That included rapper Thomas “T-Streetz” Davis, Stoner’s close friend. A week later, on the day of Stoner’s funeral, Davis was killed on a South Side Chicago street in a shooting with possible links to Stoner’s. A police report noted Davis had a large “ZackTV” tattoo on his back.

The circumstances of Stoner’s killing suggest he could have been targeted because of his work in gangland journalism, said Alexandra Ellerbeck, North America program coordinator for the New-York based Committee to Protect Journalists. She said for now, though, her group is categorizing the slaying as an unconfirmed case of a journalist being killed over his work, with plans to recategorize it as a confirmed one if clearer evidence emerges.

She said it’s rare that U.S. journalists are slain for their work inside the United States.

According to the police report, a car pulled up next to Stoner’s sport utility vehicle around 1:30 a.m. two blocks from the club and at least one gunman opened fire. The report says there were four attackers in all, which it referred to as “Unknown Assailants 1 through 4.”

Stoner spoke frequently about his fear of getting shot, possibly by a gang that perceived a report on his channel favored enemy gangs. In one video, a somber Stoner pulled a handgun from his pocket, saying he carried it everywhere because “you just gotta be prepared.”

It appears he was taken by surprise the night he was shot.

His legally registered .40-caliber pistol was recovered at his feet inside his Jeep, the documents say. It was fully loaded but he never got a shot off, according to a police report.

An autopsy report says the fatal bullet entered the back of the head by his left ear, lodging in his brain. He also had a nonfatal gunshot wound to his shoulder. Paramedics found him unconscious, slumped over the console of his SUV, but with a strong pulse. He was pronounced dead at a hospital at 4:20 a.m.

His death certificate lists his occupation as, “Self-employed video professor.”

The evidence that investigators have includes six shell casings and the fatal bullet. They also have cellphone video taken from a nearby apartment moments after the shooting.

The footage shows young men running around Stoner’s vehicle. One appears nervous about the prospect of getting shot and hides behind a car when someone drives by. The men, who could have been Stoner’s friends from the club following farther behind his vehicle, get into a car minutes later and speed away.

Davis livestreamed himself at a police station days before he was killed, saying he was there to quash false rumors he helped Stoner’s attackers. There’s nothing to indicate he did. An officer in the video calls him a witness to the shooting. That cellphone footage is not included in the documents released to the AP but was widely shown on social media.

At least a dozen surveillance cameras are visible in the short stretch Stoner drove before the shooting. Randy Cohen, who owns the Royal Pawn Shop next to the Refuge club, told the AP detectives retrieved surveillance video from a parking lot where they told him Stoner may have been arguing with someone before he drove off.

The evidence that investigators have also includes a sedan that police note “was involved” somehow and then abandoned in the street. The police report includes the car owner’s name and adds that the vehicle wasn’t stolen.

Chicago’s homicide clearance rate was around 18% for 2017, according to the most recently available data on the police website. Police spokesman Anthony Guglielmi says those figures are misleading, including because it takes 18 months on average to solve a homicide. The number of homicides solved in total is 48%, he said.

The national average is 62%, according to FBI data.

Guglielmi said getting witnesses to tell what they saw is a major obstacle. “If we get testimony from a witness, we’ll solve every homicide,” he said.

Just because a homicide isn’t officially solved doesn’t mean the identity of the suspect isn’t widely known, gang experts say. Some gangs want it known that they killed a high-profile person within their circles, believing it can bolster their reputations and help scare off rivals.

McCaskill, the videographer who lives in the same part of the South Side where Stoner grew up, said it’s likely that many people in the city have known who killed Stoner for months.

“The streets know what happened,” he said.