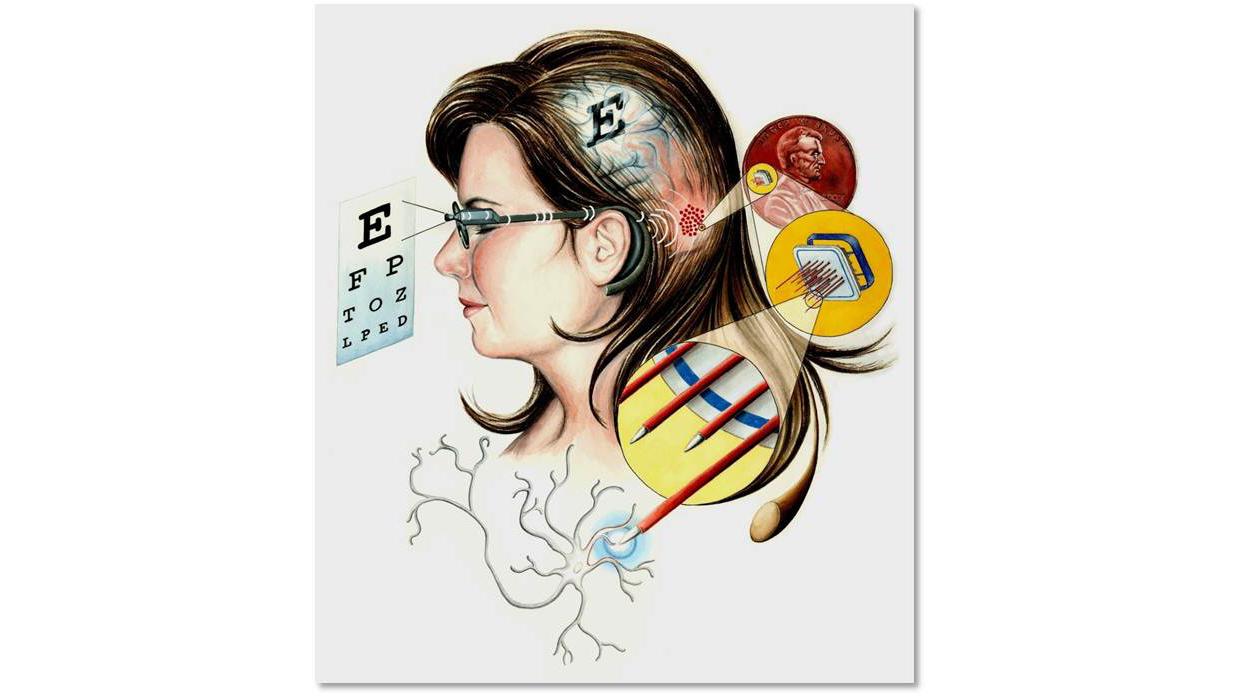 An illustration of the intracortical visual prosthesis system developed by researchers from seven institutions, including the Illinois Institute of Technology and University of Chicago. (Courtesy of Philip Troyk and Vernon L. Towle)

Cameras have long been used as a metaphor to explain how people see, and a team of researchers hopes to one day turn that metaphor into a reality through the development of a visual prosthesis that utilizes a camera.

The researchers are led by Philip Troyk, professor of biomedical engineering and associate dean of the Illinois Institute of Technology’s Armour College of Engineering.

“If you’re able to introduce artificial information in the form of electrical stimulation that had a temporal and spatial pattern related to an image captured by an electronic device, like a camera, it could bypass the optic nerve and introduce the vision directly into the brain,” said Troyk.

“We don’t have the technology to restore biological vision,” he added. “At this stage we’re trying to convert someone who’s totally blind into someone who’s just legally blind.”

The University of Chicago recently received a five-year $2.4 million subcontract from IIT to develop a wireless device that might be able restore partial vision to people who have lost their sight. The grant is part of a larger $11.8 million project awarded to IIT with Troyk as the principal investigator by the National Institutes of Health as part of the White House BRAIN Initiative (Brain Research through Advancing Innovative Neurotechnologies).

The first one to two years of the project will be the preclinical phase in which researchers continue developing the technology and work on getting FDA approval, followed by at least three years of selecting, training and testing in human subjects during the clinical phase.

For the past 15 years, Troyk has been working on developing a visual prosthesis with an interdisciplinary team of researchers from IIT, the University of Chicago, John Hopkins University, Chicago Lighthouse, University of Texas at Dallas, MicroProbes for Life Sciences and Sigenics, Inc.

Their work builds on decades of research and experiments by scientists around the world. But few may know the origins of visual prosthetic devices can be traced back to a local doctor.

Northwestern University neurologist Wendell Krieg was the first person to “come up with the idea of building a visual prosthetic for restoring vision,” said Vernon L. Towle, who is working with Troyk and is a professor of neurology at the University of Chicago.

In 1947, Krieg “proposed a plan for a heart pacemaker and the use of electrodes to help the blind see and the neurologically impaired regain mobility,” according to a 1997 Chicago Tribune obituary for Krieg. “Primitive equipment limited the procedure's effectiveness, but others would pick up the idea and, with improved electrodes, find many applications for it.”

A few years later, the NIH changed the way it funded that type of research, which led to Troyk’s grant being canceled. That prompted him to team up with the aforementioned researchers and institutions which had also been working on similar projects. 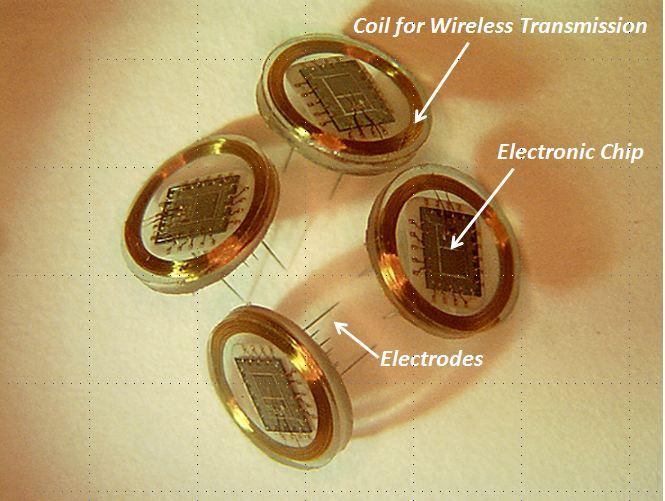 Wireless floating microelectrode arrays (WFMAs) will be implanted in the visual cortex of the brain, where they will receive and transmit visual information to the brain (Courtesy of Philip Troyk and Vernon L. Towle)

Initially, researchers continued working on a wired device, but “we started realizing running hundreds of wires from the brain to the skull to a package implanted in the brain like a pacemaker wasn’t surgically viable,” Troyk said.

Each 5-millimeter WFMA disc contains a computer chip on a ceramic substrate, which is surrounded by a coil for wireless communication, and 16 electrode pins that are finer than the width of a human hair. WFMAs will be implanted in the visual cortex of the brain, located in the occipital lobe in the back of the brain.

Images will be captured by a small cellphone camera mounted in glasses which will be connected to a small belt-worn computer that will convert the images into electrical signals. These electrical signals will be transmitted to the WFMAs via a device worn in the headband.

The WFMAs will activate neurons to generate individual spots of light known as phosphenes, which combine to form the perception of an image. The resulting images would appear similar to designs created using the Lite Brite toy, where users poke holes in a sheet of dark paper to reveal a design when light shines through. 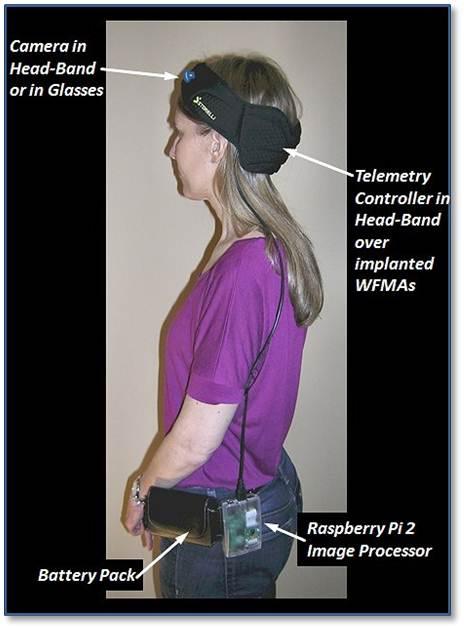 An example of how the intracortical visual prosthesis system might be used on an implanted volunteer. (Courtesy of Philip Troyk and Vernon L. Towle) “We know how to generate individual phosphenes,” Towle said. “We don’t know if we can do it in a way for your brain to combine them to have the sensation or perception of an actual image, and that’s what our clinical trial is set out to look at.”

Perceptions of where phosphenes appear vary from person to person. As part of the study, researchers will perform tests on individuals in order to map each phosphene to its corresponding location in the brain and develop computer algorithms to combine them in a way that produces useful visual information for each person.

Researchers will test the ICVP system in individuals who lost their vision due to illness or injury.

“We believe you need the neural machinery of vision in your brain,” Troyk said. “If you’ve never seen anything before, you may not have it. There’s good evidence from people who lost their optical sight at an early age and then regained it later in life, they had a difficult time processing the visual information.”

While it won’t be a “restoration of old vision,” people who have been implanted with a vision prosthesis showed “significant differences in their quality of life, even when we think it’s too low for any use,” Towle said.

For instance, one man’s visual prosthesis allowed him to be able to determine where the edge of a curb was and “because he was able to do that, he could navigate to a job much further away than he could normally go to,” Towle said. “It made a notable difference in his quality of life.” 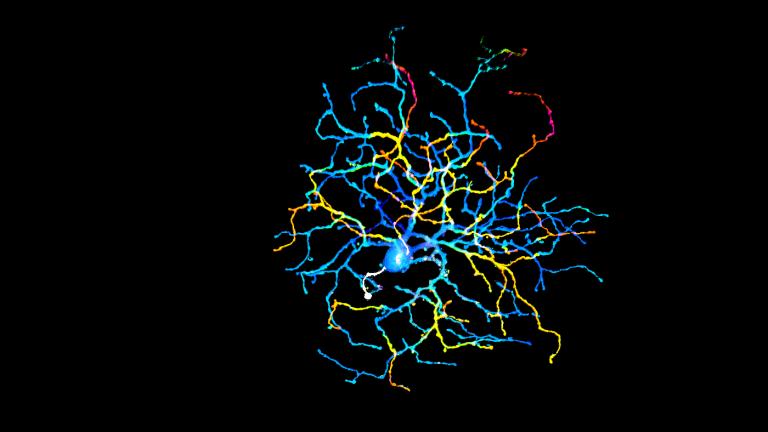 Feb. 22: Northwestern scientists have discovered a new cell in the retina which may cause nearsightedness, or myopia, when disrupted. 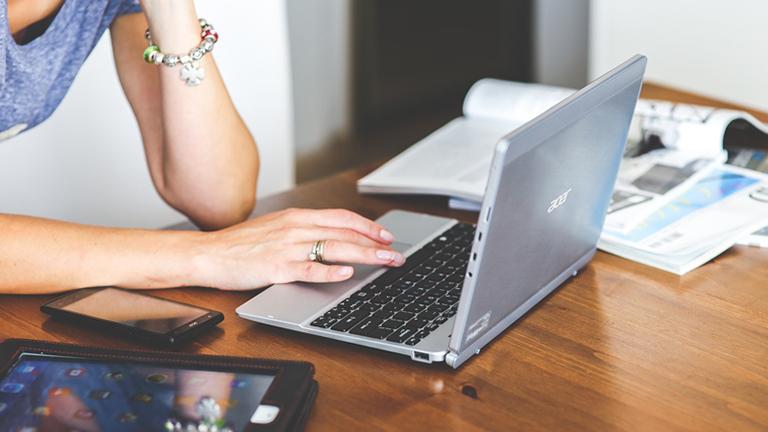