A viewer’s lucky garage sale find leads to an early feminist rivalry from the 1893 World’s Fair.

Geoffrey Baer is here with the story of the Board of Lady Managers and to answer viewer questions about Lake Calumet’s shifty behavior and the history of a bank building renovated by artist Theaster Gates.

Thanks to our viewer Terri for sending us the certificate, which she found in the back of a frame she bought at a garage sale! How come we never get that lucky at garage sales?

The Board of Lady Managers was responsible for exhibits and activities at the 1893 World’s Fair that showcased women’s achievements. The certificate is called a diploma of honorable mention. They were given to designers, inventors and expert artisans who assisted in the production of exhibits.

The Board of Lady Managers consisted of two rival factions with very different ideas about how to celebrate women at the fair and this became a 19th century battle over the role of women in American society. One faction, The Queen Isabella Association, consisted of mostly middle-class professional women who wanted to see women take a larger role in society and the working world.

The other faction, the Women’s Auxiliary, was mostly wealthy society women who felt they should focus on traditional women’s roles such as the home and children.

That philosophical difference created a rift in their approach to showcasing women’s achievements at the fair. The Isabellas wanted to see the work of women showcased side by side with men in all the exhibits throughout the fair, but the conservative Auxiliary wanted a separate pavilion for women’s achievements.

When Bertha Palmer, the prominent and conservative socialite wife of Potter Palmer, was voted the president of the Board of Lady Managers in 1890 the Isabellas didn’t stand a chance. Under Palmer’s leadership a separate and quite spectacular Women’s Pavilion designed by a woman was built to celebrate the achievement of women.

The Isabellas felt segregating women this way portrayed them as second-class citizens, but they were overpowered by the powerful society women of the Auxiliary. Ultimately, the only official contribution the Isabellas made was having a sculpture of Queen Isabella displayed at the fair – but they didn’t go down without a fight. They erected buildings outside the fair and held congresses talking about women’s work. In subsequent fairs, it was the Isabella’s vision for women’s inclusion in fair exhibits that was realized.

By the way, there’s something else really historic about the Board of Lady Managers: It was authorized by Congress, which made it the first group of women to be given the legal right to transact business on the behalf of the U.S. government. 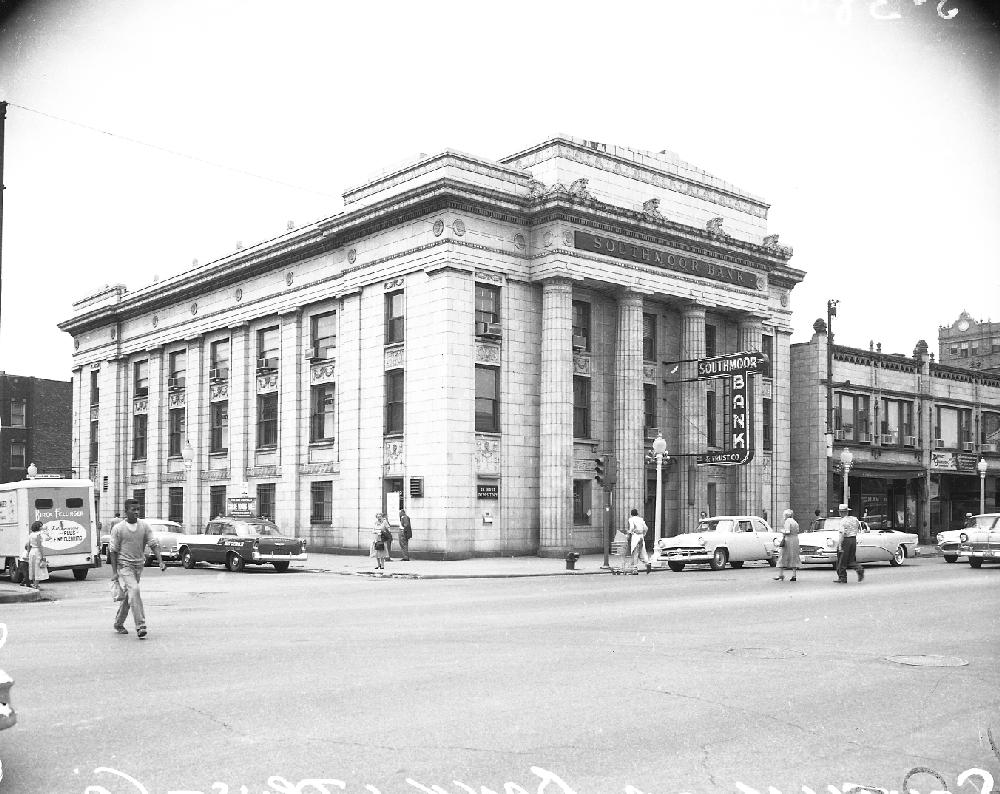 The building Fern is referring to is a former bank building at 67th and Stony Island that artist Theaster Gates has converted into an exciting community center, gallery and media archive. If you look at the inscription above the columns on the front of the building you’ll see the name of the original bank that it housed – the Stony Island State Savings Bank. The stately bank building was designed by William Gibbons Uffendell and completed in 1923, and it has miraculously outlived all the banking institutions that have moved through it, including Stony Island State Savings Bank, which fell victim to the Depression in 1931.

The building sat empty until it was taken over by a second bank, Southmoor Bank and Trust, in 1946. Southmoor Bank became embroiled in scandal in 1953 when the bank’s principals were accused of helping State Auditor Orville Hodge hide misappropriated state funds. Hodge, whom the Chicago Tribune called “the most corrupt Illinois politician of all time” in 1987, stole about $1.5 million from the state – that’s about $13.5 million in today’s dollars.

Southmoor’s president and Hodge both ended up in jail. The bank’s chairman escaped prosecution but he didn’t escape with his life – he was kidnapped and murdered in 1958. The mob was suspected in the murder, but no one was ever prosecuted.

From there, the building sat unoccupied and in disrepair for more than 30 years until it was rescued by Gates and his nonprofit Rebuild Foundation. Gates calls the 17,000-square-foot Stony Island Arts Bank building an arts laboratory. Among the permanent collections is the vinyl archive of DJ and house music pioneer Frankie Knuckles, and Ebony/Jet founder John Johnson’s personal library. It’s also used for temporary art exhibits, including an upcoming exhibit by artist Glenn Ligon titled “A Small Band.” 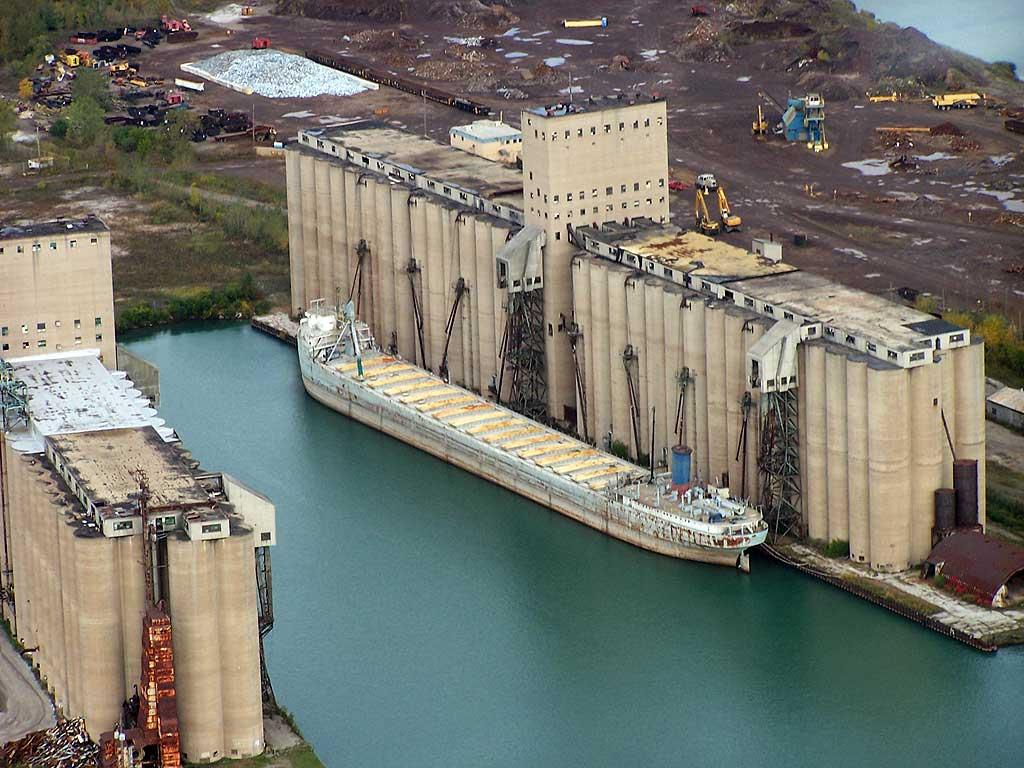 Lake Calumet has changed shape a lot over the years. It looks today like it is meant to harbor ships, but the slips look empty (except for one). Was this the plan for the lake? What are the plans for the future?

Lake Calumet is sort of a poster child for the rise and fall of industry on the South Side. It was once popular with hunters for its natural beauty and abundant wildlife, and Frank Lloyd Wright drew up plans in 1898 for a resort on the lake. (It was never built.) George Pullman built his company town on the lake’s western shore. He planned to use the lake for shipping raw materials but it proved too shallow.

As industry and shipping grew in the region, Lake Calumet was dredged and reshaped again and again. Much of the lake was filled for what is now the Bishop Ford Freeway.

The last major alteration of the lake was in 1958 for the opening of the St. Lawrence Seaway. It was deepened and those long slips were added for the large foreign freighters that were expected, but the Seaway never really delivered on its promise and few ocean-going ships ever used this port. 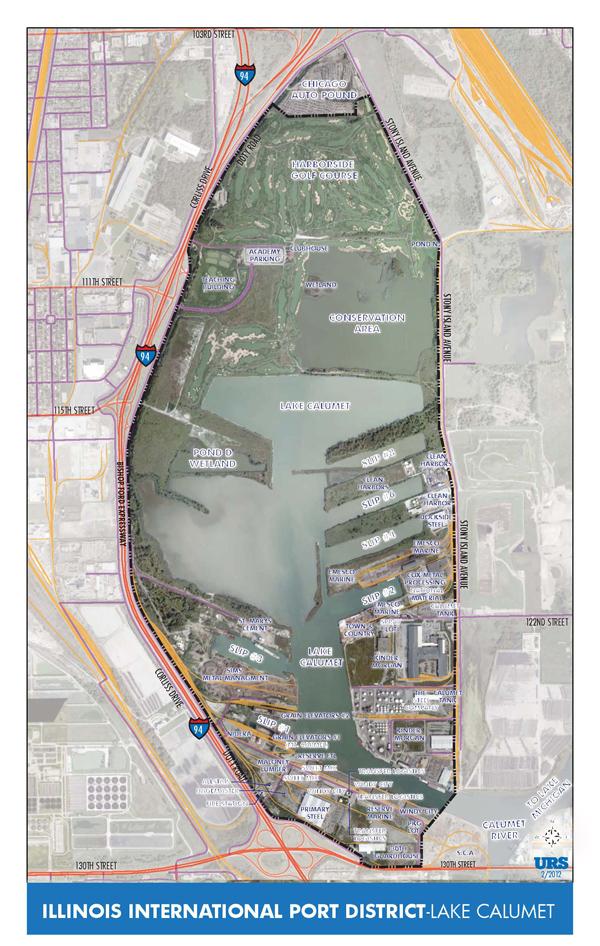 As our viewer noted, there is one ship docked in Lake Calumet. A 620-foot former ore freighter launched in 1943 has been sitting there since 1982. In the late 1970s it was converted to an engineless cement storage barge. As of 2009 it was no longer in service. You can read WBEZ’s excellent “Curious City” history on the barge for the whole story.

Clayton Harris, the new Executive Director of the Illinois International Port District which includes Lake Calumet, says that his mission is to find viable uses for vacant land there for storage and transfer of bulk commodities like sugar and concrete. He added that despite appearances there is activity at the port and its location at a convergence of highways, rail lines and waterways offers great potential. The district is looking for a private operator to move this effort forward. Harris has told the owner of that rusty steamship to tow it out of there to send a message that the port is open for business.