About this office: Cook County Clerk of the Circuit Court

The Clerk of the Circuit Court of Cook County is the keeper of the records of the Court. The Clerk is responsible for serving the court, the legal profession and the general public by recording court decisions and events; handling fines, bail bonds and other financial transactions; and supporting the court system with record storage, microfilming, automation and other services.

Name: Diane S. Shapiro
Party: Republican
Born: October 1956
Residence: Chicago
Family: Widow
Occupation: Retired
Political experience: I was a Democrat Party Precinct Captain for over 20 years in the 50th, 44th and 45th Wards. I am in my third term as the elected Republican Committeeman of the 46th Ward. In 2008 and 2012 I was the slated Republican candidate for Cook County Circuit Court Clerk and both times was the top Republican vote-getter. This may be verified in the election record.

I worked in the Cook County courts system for over 33 years and was exposed to the court system via my late father who was an Assistant State’s Attorney and later a criminal trial lawyer. I have worked in every District from 1-6, most of the Police and outlying Courts, Civil, Misdemeanor, Criminal, Law Jury, Chancery, Traffic, Housing etc. The only type of courts I was never officially assigned to were Probate and Juvenile, but I often went to Juvenile Court and the Juvenile Temporary Detention Center to conduct pretrial and presentence investigations for juveniles charged criminally as adults.

As an Adult Probation Officer I used the Clerk’s computerized system to prepare my investigations, type them into the system, do background checks in all of the systems, which do not recognize one another, including juvenile records. It is archaic and based on a 1980s platform which hasn’t been upgraded to modern standards since its installation under Aurelia Pucinski.

My vision for this office is to first eliminate the Security Detail and refund all of the money spent on this to the Cook County Coffers. I will accept only a CTA Pass, Metra Pass and gasoline allowance for my personal vehicle only when traveling from courthouse to courthouse. I intend to be in every court on a rotating basis throughout the county and be a hands on leader by example. It is my goal to de-politicize the office, refund at least 10 percent of my salary to the county, conduct a forensic audit of all expenses and reduce all unnecessary positions such as exempt rank employees wherever possible. Employees who are covered by collective bargaining, and whose jobs are protected by their union will be unaffected. I want to work with legislators to help enact legislation, if possible, for the judges to decide whom their Clerk will be, as is done at the Supreme and Appellate Court levels, rather than it being elective.

What is the most pressing issue facing Cook County, and how can you help address it?

Cook County is hemorrhaging financially and we are being taxed pursuantly because of irresponsible government policies and no checks and balances.

The waste of money, resources and paper generated by and mismanagement of this office which has been going on for too many years must be addressed. Could anyone believe that in this day and age carbon paper is still being used to duplicate official court documents? That there is no Wi-Fi or day of filing imaging, which is available in many counties outside of Cook? That the computerized systems of each division don’t recognize one another, and you need to type in codes to access each one separately? That in order to pay fines you cannot do it at a single location, and even then the recording of them isn’t done immediately, and sometimes improperly or not at all?

Files are all too often missing, lost or misfiled due to poor handling and other issues which could easily be corrected if anyone in management were concerned. An employee of the Clerk’s Office was caught several years ago shredding files in her home, and there are many other instances such as this which pass under the radar screen of the media. Rude manners aren’t corrected, slovenly attire and appearance of some personnel isn’t addressed, among other issues, either.

This is only the tip of the iceberg of observations I have personally experienced. I am a public servant, not a politician, and I intend to be a leader who will be actively involved working in the courts alongside the employees, answering phones, being present, accountable and responsible to every person of any race, creed, color, national origin or political persuasion whose lives are touched by the courts system.

Hi, I’m Diane Shapiro, Republican candidate for Cook County Circuit Court Clerk; a lifelong Chicagoan, who has worked in every one of our six district courthouses and most of our branch courts for over thirty years as a Deputy Sheriff and Adult Probation Officer.

I have worked in every type of courtroom, and actually know how to perform data entry in the Clerk’s System. I’m excited to apply my experience, knowledge and abilities to become your next Cook County Circuit Court Clerk - the chief administrator of the court system which handles 1.5 million cases every year. Everything from traffic tickets to probate are processed by the office annually.

The Clerk’s office is broken both operationally and ethically. It’s full of pay-to-play cronyism and corruption; riddled with inefficiencies, outdated technology and a clerk who is more concerned with running it for personal enrichment than performing her job and obeying her oath of office.

I am passionate about justice, and spent my life as an honorable public servant whose ethics have never been compromised. Incumbent Dorothy Brown’s administration has been a model of corruption and incompetence. She hasn’t implemented what she promised 16 years ago, and the Clerk’s office is in worse shape than ever while operating under the specter of federal and grand jury investigations.

I will comply with Federal Court orders of 2009 and 2014 to modernize the computerized system, put an end to lost files and paperwork which leaves cases and lives in limbo and wastes millions of our tax dollars needlessly. I am the candidate for all people who will lead by example to restore pride, honor and dignity to our court system.

We are facing dire strains on our economy due to corruption and wasteful pay-to-play politics of our elected leaders who would rather raise taxes than cut costs and operate within a balanced budget.

I am asking for your vote. Please help me clean up corruption, waste, mismanagement and fraud in the Clerk’s office. I’m Diane Shapiro, ethics are my guiding light. Thank you. 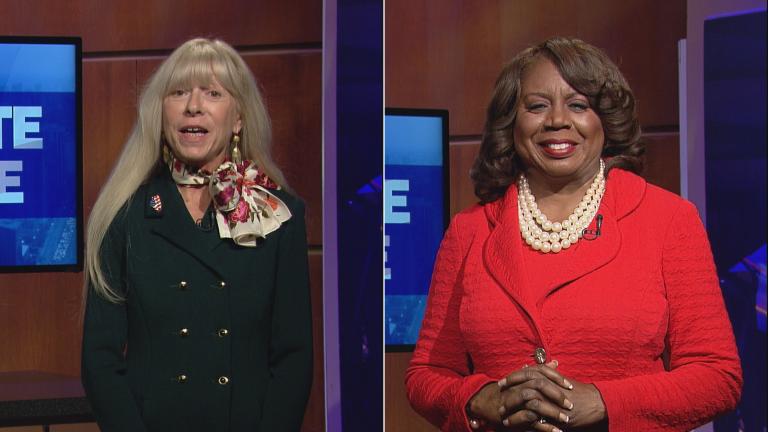