“Giving money and power to government is like giving whiskey and car keys to teenage boys.”

That piece of wisdom from humorist P.J. O’Rourke might be worth keeping in mind, with presidential election season well underway.

Since the 1970s, O’Rourke has been writing about politics, covering wars, and satirizing American life. His new book, “Thrown Under the Omnibus,” collects a variety of works from his prolific career.

O’Rourke hails from Toledo, Ohio, though his mother’s family is from Chicago and he spent two years at Oak Park and River Forest High School. O’Rourke says humor was an intrinsic part of his upbringing. 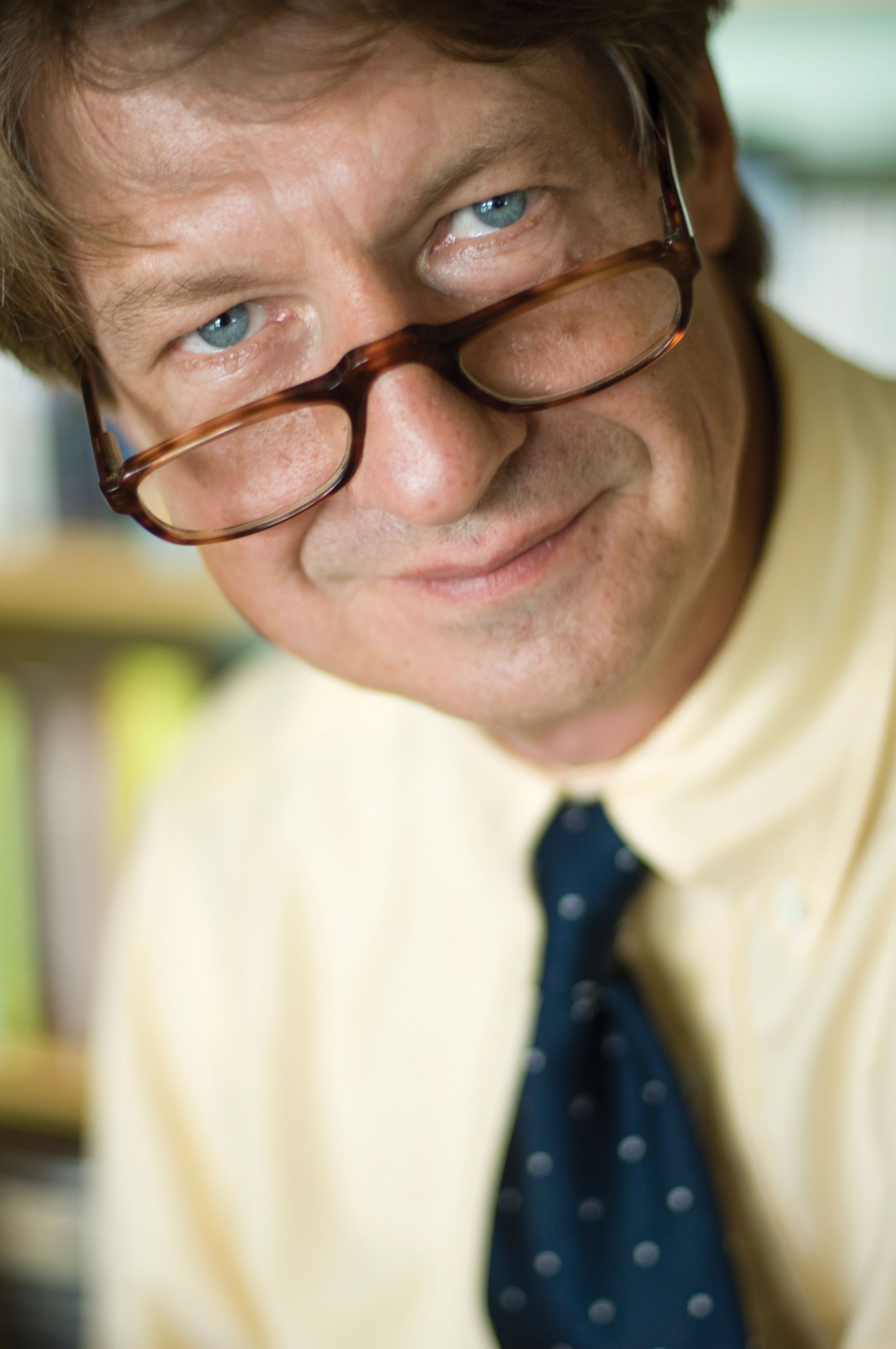 (James Kegley) “There are two kinds of Irish families. There’s the hitting kind, and there’s the teasing kind,” O’Rourke said. “If you’re lucky, you’re born into the teasing kind of family. And that was the O’Rourkes. Being funny, telling jokes, teasing people was the way they expressed all their emotions. Grief, anger, love, approval, disapproval, was all expressed with teasing. And so [humor] just kind of came naturally.”

Raised in a “rock-ribbed” Republican family, O’Rourke did a short stint as a left-leaning hippie in college. When he returned home with long hair and a big red fist on the back of his jacket, O’Rourke’s grandmother told him she worried he was becoming a Democrat. Horrified at the accusation – and the association with Lyndon Johnson and the Vietnam War – O’Rourke quickly corrected his grandmother, informing her that he was a Communist.

“Just as long as you’re not a Democrat,” came her reply.

O’Rourke has long since returned to the political right. In addition to writing his own books, he’s also a contributor to the conservative magazine the Weekly Standard and a fellow at the libertarian think tank the Cato Institute. He’s been writing about politics since the 1972 election, and says he’s never seen a weaker field in a presidential race.

“We have a few respectable candidates here. They’re either very tired and worn out … (I’ll name no names. Hillary.) … or they’re guys like John Kasich, who has a perfectly good record, good experience, has done a good job as governor, and he’s polling at four percent. I don’t know what is going on out there.”

“There are two kinds of Irish families. There’s the hitting kind, and there’s the teasing kind.”

As for front-runner Donald Trump – “the abominable showman” – O’Rourke says that people who grew up a Republican regard Trump the way someone who grew up a Scot regards Fat Bastard in the Austin Powers movies. And what of the other outsider at the head of the pack, Ben Carson?

“Great guy … but he should get back to work! He’s a brain surgeon! He could be out there doing valuable work, like removing the leaking silicone brain implant in Trump’s head that’s endangering Republicans everywhere.”

After the recent ISIS attack on Paris, plenty of O’Rourke’s fellow conservatives have expressed a desire to stop Syrian refugees from coming to the United States. But O’Rourke says anti-immigrant sentiment on the right goes beyond recent terrorism.

“I will listen to a Sioux Indian about the problem with immigrants. He or she has a leg to stand on in that argument,” O’Rourke says. Most other Americans? “Pure xenophobia.”

O’Rouke also did a stint as the editor of the National Lampoon magazine, the group that’s been called the root of modern humor to "Saturday Night Live"’s tree.

“If I was the root,” O’Rourke insists, “I was deeply buried.”

Read an excerpt from "Thrown Under the Omnibus." 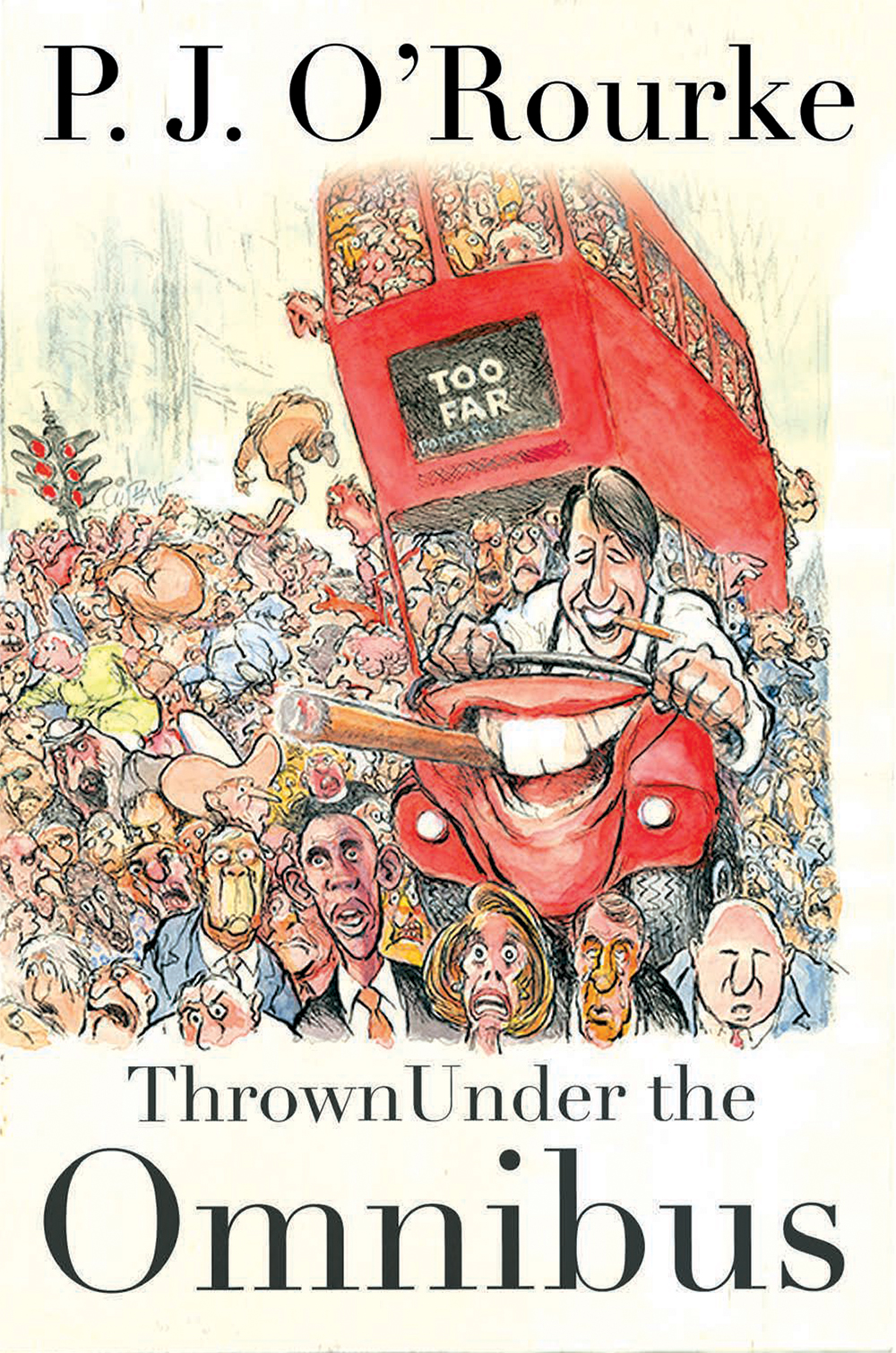 There’s a long-term problem with being a writer, and the problem is all the things that, over the long term, I’ve written. How would you like to have the twaddle and blather you talked forty years ago preserved in detail, set down in black and white, and still extant someplace?

I once had hope that the fashion for recycling would rid me of my printed past. But what artisan—however modest his art—can bear to think that his life’s work amounts to no more than the one-one hundredth part of the local Boy Scout paper drive? So there’s still a heap of it in an attic closet.

Then came digitization, when everything one has ever written or said or, for all I know, thought is embalmed and heaped in the infinite attic closet of the Internet.

Sooner or later somebody will discover those closets and these skeletons. I might as well publish them myself. Also, I’m being paid for it. The business of trading embarrassment for something of value is an ancient custom, dating back to the murky beginnings of The Oprah Winfrey Show.

Examining my musty work I see evidence that I was once younger than anyone ever has been. And on drugs. At least I hope I was on drugs. I’d hate to think that these were my sober and well-considered thoughts. It is, I guess, interesting to watch the leftist grub weaving itself into the pupa of satire and then emerging a resplendent conservative blowfly. Also interesting is the career arc. I start out making cruel fun of a second-rate American president and wind up making cruel fun of a second-rate American president.

And that is all the interest I can summon. I wonder how many people in the so-called creative fields stand before their accumulated professional efforts and think that the thing they’ve been doing for the past four decades is a thing for which they have no particular talent. Not enough, to judge by the too copious output of various mature painters, poets, and architects. Hardly ever do we hear these people exclaim, “My pictures don’t look like anything,” “My poems don’t rhyme,” or “This isn’t a building, it’s the box a building comes in.”

Fortunately, I discovered journalism. Talent hasn’t been a question since. But I didn’t mean to be a journalist. I meant to be a genius. I was going to produce an oeuvre so brilliant, important, and deep that no one would ever understand it. Pooh on Finnegans Wake. “. . . riverrun, past Eve and Adam’s, from swerve of shore to bend of bay, brings us by a commodius vicus of recirculation back to Howth Castle and Environs . . .” Anybody can read that. Here’s a line from a play I wrote in 1968: “vIvAvIvAvIvA vIvAvIvAvIvA vIvAvIvAvIvA.”

Unfortunately I didn’t have the knack for literature. It seemed that a certain number of English professors had to have written brilliant, important, and deep PhD dissertations on how no one would ever understand  you. Also, it helped to be dead.

To tell the truth, I didn’t even mean to be a writer. I meant to be a race-car driver, except I didn’t have a race car. Or I meant to be a rock star, except I couldn’t sing or play an instrument.  (I know, I know, there are so many who never let that stop them, but I was naive.) Or I meant to be a soldier of fortune except the entry-level job in that field was a stint in Vietnam and, jeez, they were actually shooting at you over there. What I meant not to be was just a college student. How bourgeois. I did spend the summer of 1966 working as a railroad brakeman, and that seemed to me to be the coolest job that a fellow who knew all the verses to “If I Had a Hammer” could possibly have. I wanted to quit college and stay a brakeman forever, but (this never seemed to happen to Neal Cassady) my mother wouldn’t let me.

So I had to find something I could be while also being a college student and something that didn’t require expensive equipment, difficult skills, or courage under fire. Writing was the obvious choice.

I decided that I would, over the summer of 1967, write a novel. I wasn’t sure how long something had to be before it was considered a novel so I looked around for the briefest acceptable example of the type. I settled on Oscar Wilde’s The Picture of Dorian Gray. In point of learning the craft, I would have been better off reading the book. Instead, I counted the words in it, multiplying the average per page by the total of pages to arrive at the figure 50,000. There were 130 days in my summer vacation. If I wrote 384 words a day I would be within 80 words of a complete novel by fall. And, so, every night after work and every noontime when I got up on Saturdays and Sundays, I would sit down and write 384 words. Oh, sometimes it was 380 and sometimes 390, but usually I was pretty close to my mark. And in September I indeed had something that was . . . just awful.

I have not been able to reread it, partly because of severe wincing but partly because I couldn’t type and all 49,920 words are scrawled in longhand (also execrably spelled and punctuated with mad abandon). The text concerns, as much as I can determine or remember, being young in Ohio. Fair enough, since I’d never been anything other than young in Ohio (though I had visited Chicago and been to Florida twice). I believe the protagonist visits Chicago and goes to Florida twice. The problem with the book is that I saw being young in Ohio as a horror beyond telling and my prose proved the case.

When I got back to school in the fall, I gave my opus to Jerry Bovim, the only real writer I knew. Jerry hadn’t actually published anything, but I could tell Jerry was a real writer because, although he was not yet thirty, he was already drinking himself to death. (I still have some of Jerry’s fragmentary manuscripts, and the sad truth is that he was a real writer. Indeed, he might have been another John Kennedy Toole if only he’d killed himself after he’d completed something instead of before.) Jerry wrote a long critique, a largely charitable assessment in which he expounded upon the difficulties of the picaresque novel, the challenges of first-person narration, and the need for consistency in fictional point of view. He allowed that some of my characters were effective, was indulgent with my attempts at plot development, and even went so far as to say “the thing as a whole is rather likable.” But at the end of his commentary he appended this postscript: “It has just occurred to me that there is, however, the dreadful possibility that your book is supposed to be serious.”

THROWN UNDER THE OMNIBUS © 2015 by P. J. O’Rourke; used with the permission of the publisher, Atlantic Monthly Press, an imprint of Grove Atlantic, Inc.