A cancer diagnosis unleashes a whirlwind of emotions and questions for patients and their loved ones. To help them navigate through this trying time, Dr. Ranjana Srivastava, an oncologist and former Chicago resident now based in Melbourne, Australia, shares her knowledge in a new book, “A Cancer Companion: An Oncologist's Advice on Diagnosis, Treatment, and Recovery.”

She joins us on "Chicago Tonight" to talk about her book.

“I enjoy being a communicator about health care, presenting information in a way that people can understand. I also find writing to be cathartic, helping me make sense of my field,” Srivastava said. “Being an oncologist carries a great emotional toll, which is why we see such high burnout rates among oncologists.

“Writing helps me work through many of these issues, helping me focus on the human side of being a doctor. In short, I believe my writing makes me a better doctor.”

Read an excerpt from chapter six.

Deciding Whether to Have Treatment and Understanding Side Effects 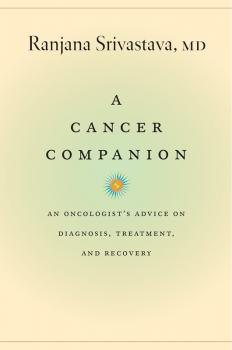 In the throes of your anxiety about the future or your enthusiasm to just get started with treatment so you can beat the disease, you might regard this chapter curiously. After all, what’s there to decide about having treatment for a condition as serious as cancer? As more than one patient has scoffed, ‘I will die without treatment, so what’s the decision here?’ I hate to imagine that my patients think I am frittering away their time with indulgent questions that they can ill afford to ask. But this is an emerging question in many areas of medicine, not all cancer- related—what is the net beneﬁt of a treatment that is usually accompanied by side effects? For some the beneﬁt is clear. They are being treated with the intention of cure, which means that the inconvenience of temporary side effects may be worth the long- term chance of being free of disease. But for many people, especially those with advanced or metastatic (and hence typically incurable) forms of illness, or conversely, very early cancer, if we agree that one of our goals is to maximise quality of life by avoiding signiﬁcant toxicity, this is an important question to ponder. Like many patients, you might be feeling too frightened or overwhelmed to give this matter much thought, but I think it is worth your time.

I want to start by telling you about a memorable patient, Peter. Everyone wants to own him as a patient—the surgeon, the radiation doctor and the oncologist. But, in a polite way, Peter dislikes medical professionals and, given half a chance, is quick to espouse the view that the secret of his wellbeing is his successful avoidance of doctors.

At eighty- two years of age, Peter was diagnosed with early prostate cancer via a blood test that his doctor obtained as part of his annual check- up. Scans and a biopsy followed and a multidisciplinary team concluded that with his type of early prostate cancer, there was no so- called ‘best’ treatment. Rather, there were options, and it would come down to an informed decision taken by the patient. Armed with the phrase he had heard most often in the past few weeks—‘patient preference’—he did the round of doctors to see if they could help him decide.

The urologist kept Peter waiting for two hours as he was caught up in theatre. Finally, the surgeon arrived and ushered—or as Peter described it, herded—him in. He was a man in his forties who worked at a ﬂying pace. Everything from the surgeon’s illegible writing to his advice was rushed and he made no attempt to curb it. The prostate cancer was early and hence operable; Peter could have the operation next week. The procedure was reasonably straightforward, he performed a few every day, and the outcome was usually good. ‘But there is a risk that you could end up with impotence or incontinence and —’ At that point, Peter lost inter-est. When his wife, Elizabeth, asked him later what the surgeon said, all he could reply was, ‘I don’t think the operation is necessary, love.’ In his mind he thought that even if it was, that surgeon wasn’t the right man for him. He wanted someone with more time.

Peter’s doctor arranged for a second opinion from an older surgeon. He didn’t think that surgery was essential but spoke about suppressing the male hormone testosterone that encouraged prostate cancer growth. But along with the names of drugs, he rattled off another list of side effects that seemed no less daunting than the surgery’s. Peter heard ‘impotence, hot ﬂushes, heart and bone disease’ and thought that if it were up to him, he would just collect his spade and shears and get right back to gardening. But Elizabeth would worry, so he felt he had to try harder.

Next on the list was the radiotherapy doctor. She was a pleasant Irish lady and they spent a bit of time talking about his youth in Ireland. She told him she could offer radiotherapy but it too had a variety of side effects, some long- lived. Peter’s thoughts went immediately to his friend Barney, who suffered persistent diarrhoea and the urge to urinate following radiotherapy for prostate cancer. What could be worse than running to the toilet every hour while he was tending his garden? He heard that the radiotherapy would happen every day for a few weeks. Who would run his business if he was constantly in and out of hospital? Elizabeth could manage for a few hours or days but not weeks. She couldn’t keep track of where the various plants were, and hated doing large orders. It didn’t take long for Peter to cross out radiotherapy as an option, but he couldn’t bring himself to tell the doctor just yet so he asked for some time to think it over. In actual fact, he was going to use that time to plant a long- promised rose garden for an old friend.

As he enjoyed getting his hands dirty in the soil, he noted to himself that the two surgeons and the radiation doctor were equally conﬁdent about their recommendations. Could it be pos-sible that both treatments were similarly effective? And if so, why didn’t anyone say so clearly? Why did one expert pit his opinion against another? The ﬁnal doctor on his list was the oncologist, which was me. With delays and cancellations, it had taken him two months since diagnosis to get through his list of doctors. I could tell that he was impatient to cover the last base. ‘I know that surgery is not for me, neither is radiotherapy. I have talked to my GP, Dr Joe, about hormones to block testosterone, and I can’t say they sound too good either. Hot ﬂushes, impotence, heart problems are just the ones I remember.’ He ﬁxed me with an earnest gaze. ‘Tell me, doc, is it really necessary to have any treatment?’ I looked at him curiously. Usually the question from patients is about how much treatment, not whether to have any.

‘I have some graphs and ﬁgures I can show you that help predict the risk of the cancer spreading—would it help if you saw them?’ I offered.

He simply answered, ‘No, I want to trust someone to be straight with me.’