Peggy Lipschutz is passionate about painting. She is perhaps best known as a painter of social and political causes. A new exhibit at the Noyes Cultural Center showcases her decades-long career.

Jay Shefsky takes a tour of the exhibit and talks with this prolific painter. 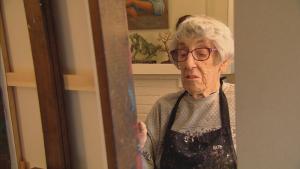 Jay Shefsky: The one concession that 96-year-old Evanston artist Peggy Lipschutz has made to her age is that she now paints in her living room instead of upstairs. Peggy Lipschutz is perhaps best known as a painter of social and political causes.

Peggy Lipschutz: But it's mostly the events that have happened that inspire, you know, the things that I paint. Well, there were some big meetings up in Madison when that governor decided to get rid of all the unions, so I made a big painting out of it. You'll see it in the show.

JS: There’s a retrospective exhibit of Peggy’s paintings up now at the Noyes Cultural Arts Center in Evanston. There are some paintings here that are more than 70 years old. Plenty of them are images of union struggles and other progressive social causes—virtually all are of people, including the artist, and many feature music; like these three (below) on loan from the Old Town School of Folk Music. 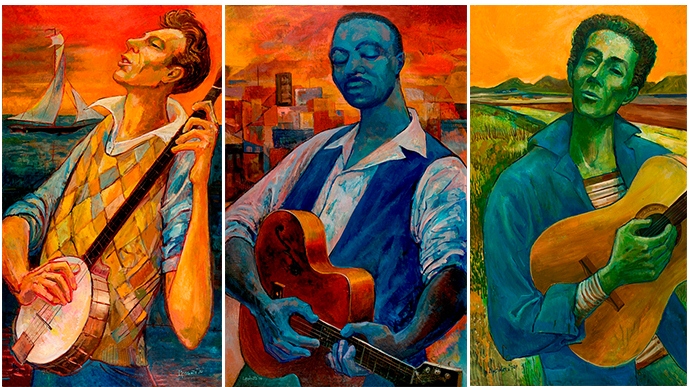 PL: Oh yes, absolutely, I always loved it. And when I discovered that I could work with music that was just a revelation. It was so much fun.

JS: Peggy Lipschutz was a kind of performance artist before the term was invented—drawing with chalk to illustrate a song being performed. She appeared on “Mister Roger’s Neighborhood” in 1970.

PL: Well, you start with the tree and you put in a little background (hums "This Land is Your Land") and then you put in the mountains behind two or three different colors. It's all according to the rhythm.

Pete Seeger (interview from "Never Turning Back: The World of Peggy Lipschutz"): I was astonished at what she was able to do. She just needed to know, what verses are you going to sing, and what order are you going to sing them. And she did it so expertly I couldn't believe she hadn't had a great deal of rehearsal.

PL (as quoted from a 1970 video): Now a lot of women have heard of pap tests but few have had them. They worry about them, they're scared.

JS: And often Peggy would do “chalk talks” where she herself would speak as she drew about cancer prevention or Jane Addams or political causes. Most of Peggy Lipschutz’s paintings are not overtly political.

PL: There is also a lot of just plain human carrying-on. Just like life isn't all politics. I mean even like the cello that turns into a crocodile. You think something wonderful is going to happen and it doesn't turn out that way. Sometimes you play the cello and it sounds like a crocodile. (laughs) You know?

Jerri Zbiral, curator of the "Evanston Legend: The Art of Peggy Lipschutz" exhibit and filmmaker of “Never Turning Back: The World of Peggy Lipschutz”: Her whole personality is in her paintings. You know she talked about the "The Wrested Heart." We all have hearts, and we all every now and then need to take that heart, pull it out, and take a look at it. And I'm hoping with paintings like that and with paintings like "Joy," where you have birds flying out of your chest that you can say "I felt that." 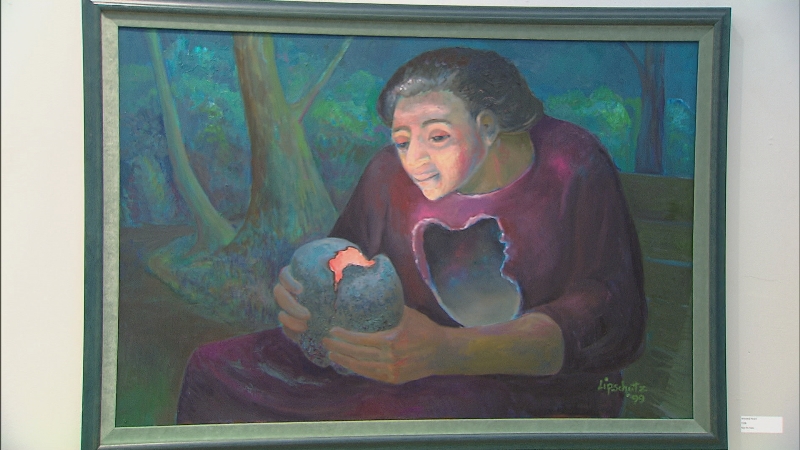 "The Wrested Heart" by Peggy Lipschutz

JS: Peggy Lipschutz was born in England and started painting as a teen. Her father made her aware of leftist causes like the fight against Spanish fascism. They moved to the U.S. when she was 19 and for many years she worked as a cartoonist, mostly for union journals and other social causes. So, you are almost 97 years old. You've been doing this for a long time and I'm sorry if you get tired of this question, but to what do you attribute your longevity?

PL: Well, two things. I attribute it to yoga—doing 50 years of yoga. And also I think, you know, the genes are there, and just painting. Just enjoying having something you are passionate about. That's what really is the answer.

PL: Well, I would like to be remembered as a painter whose work had some effect on the folks that look at it. That it inspired people to be more active and to change things. 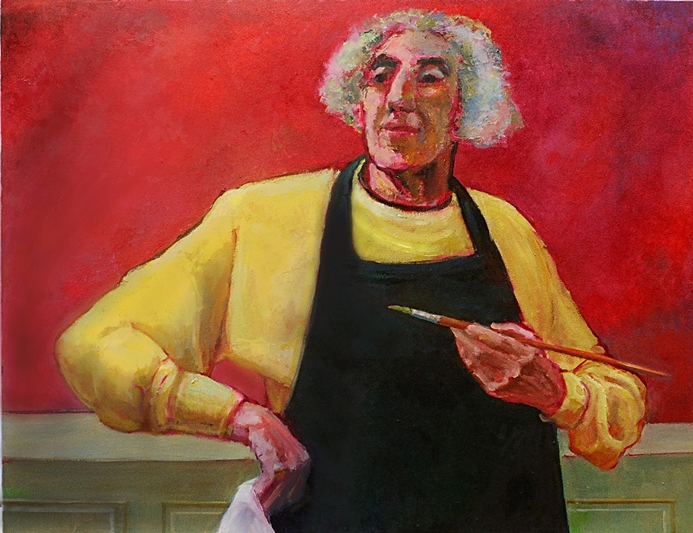 A self portrait by Peggy Lipschutz

JS: And at 96, Peggy Lipschutz has lost none of her fire about what she sees wrong with the world.

PL: It's run by the rich and they don't care about 90 percent of the people. They can spend billions on this election, but they are trying to cut back the Social Security. Many, many things are wrong. You can't even begin to express them but I would like to be remembered as you asked me as a painter who was concerned with justice, and equality and peace. Those are the three important things. Those are what I'm looking for.

Below, see a trailer for the documentary about Lipschutz.