Chicago Tonight marks the 10th anniversary of Hurricane Katrina with two storm survivors who moved to Chicago after the destructive hurricane ripped through the New Orleans area. Joining us to share their stories and memories are David Kaplinsky and Tovi Khali.

Tovi Khali was born in New Orleans and grew up in nearby Metairie. She was living in the French Quarter, above a club where she sang, when the storm hit. She’d decided to ride out the storm in New Orleans, but didn’t want to stay in her apartment, fearing that glass from her big French doors would get blown out. So Khali took refuge in a swanky hotel down the street, but it was no vacation.

“It was hot, disgusting, you’d never think that was a five-star hotel it was so awful,” Khali said. 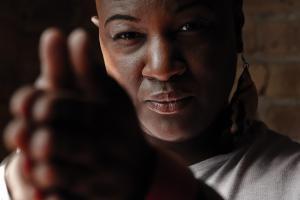 “Usually after a hurricane itself was over, all the residents would go outside and start cleaning up the neighborhood,” Khali said. “I knew something was wrong … because we weren’t allowed to come outside. The military was there holding us at bay.”

Eventually they were let out for short periods of time to get water and supplies.

“I had never seen my city in such a desperate state,” Khali recalled.

Khali was rescued from the city by bus and taken to Houston’s Bush Airport. From Houston, she and her then-husband caught a Greyhound to Chicago, where he was from.

She says moving to Chicago was a culture shock. She struggled with anger and was afraid of leaving her home. She was also afraid to start performing again.

Now, Khali says she’s become more adjusted to live in Chicago and feels that she’s an even better entertainer than she was before. She also feels a sense of purpose to celebrate and educate people about the New Orleans-born jazz tradition.

Still, Chicago isn’t without its hurdles for Khali. “Climate is the biggest challenge for me. Blizzards? Hurricanes I can handle, blizzards I don’t know,” she said. “As far as the big city approach, no one has time for the little city stuff. Like in New Orleans, people stroll. Here, you better get out the way! People have places to go. I’ve had to adjust to the faster way of life.” 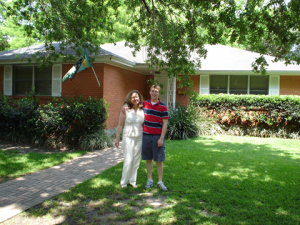 David Kaplinsky was born and raised in New Orleans. He had just started high school when his family evacuated to Birmingham, Ala.

“I was actually kind of happy. I had been having a stressful first week of high school, so I felt like I was getting a little vacation.” Kaplinsky said. “We thought it was just another evacuation, that [the storm] probably wouldn’t hit, but that if it did maybe we’d get a foot of water.

“We put certain things up on the couch and on beds in case we got a foot of water so they’d be above the water line. And of course that was silly, which we didn’t know, but we got eight feet of water. We had a levee break 10 houses down from our house.”

His family moved to Grand Rapids, Mich., where Kaplinsky’s mother was from. All they had was their dog, a few days’ worth of clothes, and some personal items. Kaplinsky brought a guitar he’d just gotten as a gift. Learning to play it over the course of that year was a source of comfort.

“It was overwhelming. Chicago is so vast, it’s hard to take it all in at once,” Kaplinsky said.

A supportive high school environment helped to ease his transition. After he graduated from the U. of I., his parents decided to move back to New Orleans. Kaplinsky joined them, but came back to Chicago after less than a year, missing the theater scene and the life he’d made in the Midwest.

He recalls that time of transition: “It was a bit of a reality check. Even though New Orleans was where I’d wanted to be, I had grown up here and made my friends here.”

After Hurricane Katrina struck, Chicago Tonight correspondent Elizabeth Brackett visited Baton Rouge, La. to report on the rescue and evacuation efforts underway. Watch her report from September 2005 in the video below.

See a timeline highlighting the path of Hurricane Katrina.