Geoffrey Baer answers viewer questions about a dreamy memorial, Soldier Field no-man's land, and railroad ruins on Chicago's South Side in this encore edition of Ask Geoffrey, which originally aired on Chicago Tonight on Nov. 19, 2014.

My dad took me to a Bears game at Soldier Field in the mid-80s and I remember a huge, closed-off section. What was it for? Or was it just leftover space? - Anthony Ponce 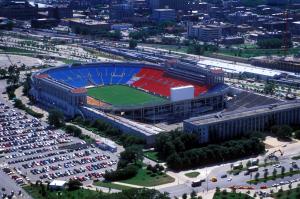 Before we answer this question, let’s take a look what Soldier Field looked like back then. In the photo to the right, you can see the area our viewer is talking about behind the scoreboard to the north. As you can see, the stadium originally had a U-shaped design. By the 1980s, the field had been shortened.  An older section of grandstands extended to the north on both sides of what formerly was the field, but was by then being used for parking.

The shape was inspired by a 1919 design competition in which Chicago’s South Park Commission challenged architects to create a stadium that would serve as a showcase "for events and a playground for the people." The competition’s rules stipulated that the stadium must have an entrance on one end and an exit at the other for military processions and that it could be used an outdoor theater. Architects Holabird & Roche won the competition by devising the U-shaped configuration for 74,000 spectators. The capacity could be expanded to over 100,000 by adding temporary seating at the far northern end, closing off the “U”.

The field was completed in 1924 and hosted a wide range of events. High school and college football games were held there, as well as championship boxing matches, rodeos, bicycle races, stock car races, outdoor masses, speeches and concerts – even a ski jump in 1937. But when Chicago’s population steeply declined throughout the ‘60s and television kept people at home, events at Soldier Field dwindled.

Of course, everything inside Soldier Field was replaced with the massive renovation of 2003, but the renovation spared the original 100-foot-tall Doric colonnades and the old U-shaped exterior stone wall to the south.

I have a photo of my grandmother and her friends in front of a fountain somewhere in the city.  I would like to know where the fountain was located. - Therese Brennock, Oak Park 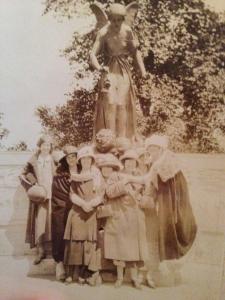 Our viewer Therese sent us the photo in question. Therese’s grandmother, Mary Payton, is the third woman from the left – she’s out enjoying a day in Chicago with some of her college friends. The photo is undated, but Therese thinks it was taken between 1920 and 1930.

We sent the photo to Julia Bachrach at the Chicago Park District, and Julia immediately recognized this lovely lady as the Eugene Field Memorial in Lincoln Park Zoo. She’s also known as the Dream Lady.

The bronze sculpture on a granite base was created by sculptor Edward McCartan and installed in Lincoln Park Zoo in 1922. Since its original installation closer to the Lion House, it was moved a little east and the plaza was rebuilt to give it a better setting. It’s now just northeast of the Helen Brach Primate House.

The memorial honors the beloved children’s poet Eugene Field who is probably most famous for his poem “Wynken, Blynken and Nod.” Shortly after Field died of a heart attack in 1895, editors from several Chicago newspapers joined together to commission the sculpture in Field’s honor. The fundraising effort took decades helped in part by donations of pennies and nickels by school children.

Field was born in St. Louis and worked for several Midwestern newspapers before moving to Chicago in 1883. In Chicago, he wrote a humor column for the Daily News called “Sharps and Flats” while continuing to write poetry and short stories.

The winged bronze figure dangling poppies over a pair of slumbering children represents the Rock-A-By Lady of Field’s poem of the same name:

The Rock-a-By Lady from Hushaby street
Comes stealing; comes creeping;
The poppies they hang from her head to her feet,
And each hath a dream that is tiny and fleet---
She bringeth her poppies to you, my sweet,
When she findeth you sleeping!

And dollies peep out of those wee little dreams
With laughter and singing;
And boats go a-floating on silvery streams,
And the stars peek-a-boo with their own misty gleams,
And up, up, and up, where the Mother Moon beams,
The fairies go winging!

Would you dream all these dreams that are tiny and fleet?
They 'll come to you sleeping;
So shut the two eyes that are weary, my sweet,
For the Rock-a-By Lady from Hushaby street,
With poppies that hang from her head to her feet,
Comes stealing; comes creeping.

The granite base also incorporates some of Field’s best-known children’s poems. There’s a stanza and scene from “Wynken, Blynken, and Nod” on the left side of the base; on the front right side, a scene and stanza from “The Sugar Plum Tree”. A scene from his poem “The Fly Away Horse” is on the right end atop one of the children’s-sized drinking fountains.

By the way, the monument’s sculptor, Edward McCartan, earned a Medal of Honor from the Architectural League of New York for this fanciful work, which was his first large project. He went on to create more notable work, including a sculpture called “The Bronze Nymph” for the Grosse Pointe War Memorial in Michigan that was stolen by a band of professional art thieves in 2001. It was retrieved in the Detroit River almost a decade later!

An old railroad embankment runs east-west at 40th Street, from Cottage Grove west to the Dan Ryan. Who built it? When was it built? What was it used for? - Mike Lisec, Lake View

The imposing concrete railroad embankments slicing through Bronzeville and Kenwood are a remnant of a now defunct “L” line, the old South Side Elevated Railroad’s Kenwood Branch. And there’s a lot of it left – most of it is still standing even though the line shut down more than 60 years ago. You can even see the embankments’ path on Google Maps! It was part of a system that transported people and freight to and from the expansive Union Stock Yards.

The Kenwood Branch had six stations running from Indiana Avenue and 40th Street all the way to the lakefront at 42nd Place. When it first opened, it was at ground level, not elevated. It was part of a network of rail lines built by the Union Stock Yards Transit Company starting in the 1860s.  All of those lines circulated within the stockyards themselves except for this one. It was originally built as a freight line but passenger service began running a few years after it opened.

The South Side Elevated Company took over the line in 1903, when Chicago city ordinances required the line to be elevated for safety. The South Side Elevated provided the trains and built the embankments and stations which officially opened in 1907. With the exception of the 42nd Street terminal, the Kenwood branch stations were plain concrete and steel with island platforms befitting what was then a sparsely populated neighborhood. But once the line was built, developers began building more apartments and boarding houses nearby, particularly along Drexel Boulevard.

In the 1930s, the Great Depression began to take its toll on the Kenwood Branch. Deferred maintenance caused the stations to deteriorate and ridership declined. By the time the Chicago Transit Authority took over in 1947, the line was all but written off. It was closed for good in 1957, and the stations were left intact but sealed off.