Blagojevich Gets Some Convictions Overturned by Appeals Court

A U.S. Appeals Court on Tuesday overturned five of the 18 convictions against former Illinois Gov. Rod Blagojevich, who is currently serving a 12-year sentence in a Colorado federal prison.

The appeals court ruling overturns the convictions related to Blagojevich’s proposal to appoint Valerie Jarrett to the U.S. Senate in exchange for a cabinet position or a high-profile job after his term as governor.

The ruling states that the jury was asked to consider all of the governor’s "asks" equally, when only some of them are illegal. For instance, the ruling says that it would not be illegal for Blagojevich to seek a cabinet position from President Obama in exchange for fulfilling Obama’s wish of having Jarrett appointed to the vacated U.S. Senate seat.

It would, however, be illegal if Blagojevich sought a private job in exchange for the Senate appointment.  The ruling states: "A proposal to trade one public act for another, a form of logrolling, is fundamentally unlike the swap of an official act for a private payment."

The ruling sends the case back to U.S. District court for a re-trial on the five overturned counts. The U.S. Attorney’s office can either choose to retry Blagojevich on those charges or drop them. The ruling indicates that Blagojevich could well be convicted again on those counts if the prosecution chooses to ignore the governor’s wish to be named to a cabinet position, and focuses entirely on his other demands in exchange for the Senate seat. 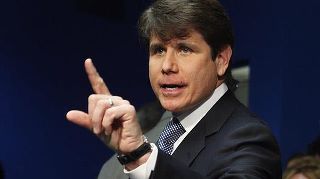 Former Illinois Gov. Rod Blagojevich If the prosecution decides not to retry Blagojevich, the ruling states that Blagojevich should be resentenced. But the ruling does not buy the Blagojevich defense team's argument that the sentencing was too harsh.

“Removing the convictions on the Cabinet counts does not affect the range calculated under the Guidelines,” the ruling states. “It is not possible to call 168 months unlawfully high for Blagojevich’s crimes, but the district judge should consider on remand whether it is the most appropriate sentence.”

The Seventh Circuit Court of Appeals stated in its ruling:

“The convictions on Counts 5, 6, 21, 22, and 23 are vacated; the remaining convictions are affirmed. The sentence is vacated, and the case is remanded for retrial on the vacated counts. Circuit Rule 36 will not apply. If the prosecutor elects to drop these charges, then the district court should proceed directly to resentencing. Because we have affirmed the convictions on most counts and concluded that the advisory sentencing range lies above 168 months, Blagojevich is not entitled to be released pending these further proceedings.”

Blagojevich was convicted of 18 crimes, including attempted extortion from campaign contributors, corrupt solicitation of funds, wire fraud and lying to federal investigators, after two jury trials.