"Born Survivors" on the Infants of the Holocaust

In the new book Born Survivors, author Wendy Holden tells the story of three women who gave birth in a Nazi concentration camp during World War II. The three babies managed to survive, and they finally meet one another 65 years later. We'll talk with the author and two of the survivors, Mark Olsky and Hana Berger Moran.

Meet author Wendy Holden and the three Holocaust survivors whose births are chronicled in her book: Eva Clarke, Hana Berger Moran, and Mark Olsky. They’re speaking at the Illinois Holocaust Museum Tuesday night. The event will be held 6:30-8:30 pm. Reservations are required. 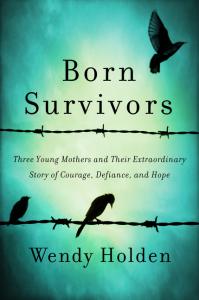 Three Young Mothers and Their Extraordinary Story of Courage, Defiance, and Hope

‘Sind Sie schwanger, fesche Frau?’ (Are you pregnant, pretty woman?) The question directed at Priska Lowenbeinova was accompanied by a smile as her SS inquisitor stood, legs apart, looking her up and down with forensic fascination.

Dr. Josef Mengele had halted in front of the twenty-eight-year-old Slovak teacher as she stood naked and shivering with embarrassment on an open parade ground within hours of arriving at Auschwitz II Birkenau. It was October, 1944.

Priska, at just under five feet tall, looked younger than her years. She was flanked by approximately five hundred other naked women, few of whom knew each other. All Jewish, they were as stupefied as she was after being transported to the concentration camp in Nazi-occupied Poland from homes or ghettos across Europe, packed sixty at a time into sealed freight wagons of trains up to fifty-five cars long. 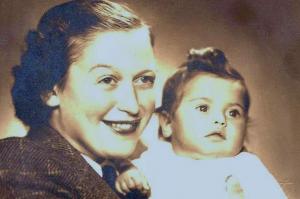 From the moment they emerged gasping for air onto the notorious railway Rampe in the heart of the Nazis’ most efficient extermination complex, known collectively as Auschwitz, they’d been assailed on all sides by shouts of ‘Raus!’ (Get out!) or ‘Schnell, Juden schwein!’ (Quick, Jewish swine!)

In confusion and commotion, the tide of humanity was shepherded by expressionless prisoner-functionaries in filthy striped uniforms who jostled them across rough ground as SS officers stood in immaculate uniforms, their attack dogs straining on their leashes. There was no time to look for loved ones as men were swiftly separated from women, and children pushed into a line with the sick and elderly.

Anyone too weak to stand or whose limbs were stiff from being squashed into an airless wagon for days was prodded with rifles or beaten with whips. Heartbreaking cries of ‘My children! My babies!’ hung ominously in the dank air.

Up ahead of the long columns of dispossessed sat two low redbrick buildings, each with an immense chimney spewing oily black smoke into a leaden sky. The grey atmosphere was thick with a putrid, cloying smell that assaulted the nostrils and caught at the back of the throat. 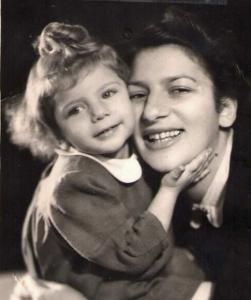 Severed from friends and families, scores of young women from their teens to their fifties were funnelled into a narrow corridor of electrified fencing like that which surrounded the vast camp. Shocked into silence, they stumbled over each other as they were driven past the chimneys and along the lip of several deep ponds until they reached a large single-storey reception building – the Sauna or bath house – hidden among birch trees.

There they were unceremoniously inducted into the life of a concentration camp ‘Haftling’ (inmate), a process that began with them being forced to relinquish any last possessions and divest themselves of all their clothing. Without a common tongue, they protested in a clamour of languages but were beaten or intimidated into compliance by SS guards with rifles.

Driven naked down a wide passageway to a large chamber, almost all of these mothers, daughters, wives and sisters were then roughly clipped of virtually every hair on their bodies by male and female prisoners as German guards leered.

Barely recognisable to each other after the electric razors had done their work, they were marched five abreast outside to the roll-call area where they waited barefoot in cold, wet clay for over an hour before facing their second ‘Selektion’ by the man who would later become known as ‘The Angel of Death’. 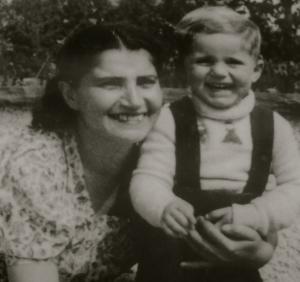 Dr. Mengele, impeccably dressed in his tight-fitting grey-green uniform with its shiny chevrons and silver skulls on the collar, held in his hands a pair of pale-kid leather gauntlets with oversized cuffs. His brown hair slicked into position with pomade, he casually flipped his gloves left and right as he strolled up and down the lines to inspect each new prisoner and – more specifically – to ask if they were expecting a child.

When it was her turn, Priska Lowenbeinova had only a few seconds to decide how to respond to the smiling officer with the gap between his front teeth. She didn’t hesitate. Shaking her head quickly, the accomplished linguist replied to his question in German: ‘Nein.’

By then two months pregnant with her longed-for child by her husband Tibor (who she hoped was somewhere else in the camp), she had no idea if telling the truth might save her or condemn her and her child to an unknown fate. But she knew she was in the presence of danger. With one arm shielding her breasts while her other covered what was left of her pubic hair, she prayed Mengele would accept her blunt denial. The SS officer with the suave looks paused for a second to stare into the face of the young ‘fesche Frau’ before moving on. 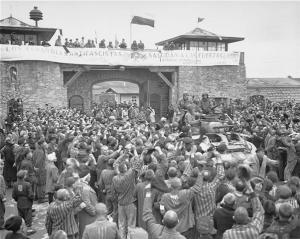 Three women further along, he roughly squeezed the breast of a woman who recoiled. When a few drops of breast milk betrayed that she was at least sixteen weeks’ pregnant, she was – at a leftward flick of his gauntlet – yanked from the line and shoved into a corner of the parade ground to join a shivering cluster of expectant mothers.

None of those wide-eyed women knew then that one direction meant life while the other could mean something very different. The fate of those who were chosen that day by Mengele remains unknown.

Excerpted from BORN SURVIVORS:Three Young Mothers and Their Extraordinary Story of Courage, Defiance, and Hope by Wendy Holden published by Harper.