A new book called Corrupt Illinois: Patronage, Cronyism, and Criminality lays out the argument that Illinois is one of the most corrupt states in the union. And Chicago is "undoubtedly the most corrupt city in our nation," says authors Dick Simpson and Thomas Gradel. They also argue that clear patterns of criminality have emerged and the patterns differ between different offices. We'll also hear about solutions to clear up our culture of corruption. Simpson and Gradel join us.

View a timeline of corruption in Illinois.

by Dick Simpson and Thomas Grade 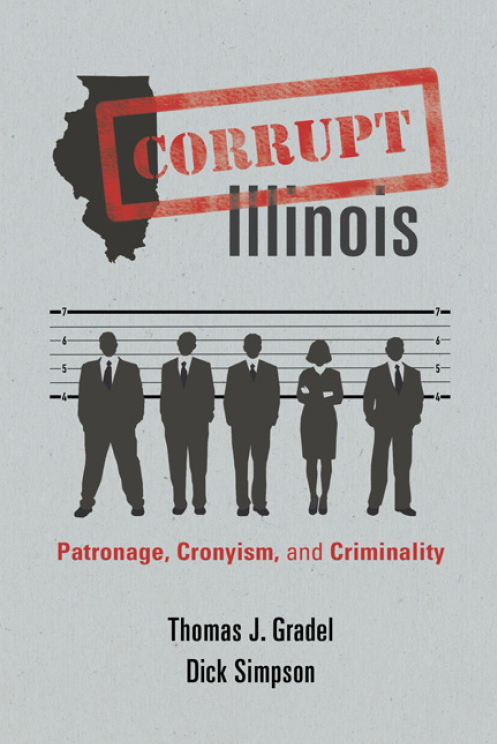 Public corruption has besmirched Illinois politics for a century and a half. Even before Governor Rod Blagojevich tried to sell the vacant U.S. Senate seat to the highest bidder, the people of the state were exposed to outrageous corruption scandals. There was, for instance, Paul Powell, a downstater, former secretary of state, and old-style politician. He died leaving hundreds of thousands of dollars from cash bribes hoarded in shoeboxes in his closet. There were the thirteen judges nabbed in Operation Greylord who were convicted for fixing court cases.

Four of the last nine governors of Illinois went to jail—Otto Kerner, Dan Walker, George Ryan, and Rod Blagojevich. They were preceded by other governors such as Joel Matteson, Len Small, and William Stratton, who were indicted or found culpable in civil or legislative hearings but were not convicted in criminal courts and were not sent to jail.

Kerner was the first governor to be convicted of bribery, conspiracy, and income-tax evasion in a case involving racetrack stock improperly acquired while in office. Dan Walker was convicted after leaving office for bank fraud at a savings-and-loan bank he acquired.

The case of George Ryan, a pharmacist and former chairman of the Kankakee County Board, involved felonies by high-ranking officials as well as bribery committed by frontline clerks and inspectors. He was convicted of eighteen counts of corruption for leading a scheme in which bribes were paid to his campaign funds as both secretary of state and governor. Secretary of state employees sold truck-driver licenses in return for bribes that were partially given to the Ryan campaigns. This led to fatal accidents by unqualified truck drivers.

The last governor (still in prison) is Rod Blagojevich, who has become the face of Illinois corruption. Even before he was convicted, he was impeached by the Illinois legislature and thrown out of office. Similar to former Governor Ryan, he was convicted on multiple counts. He had established a corrupt network of businessmen, political appointees, and politicians. He shook down businessmen and institutional leaders for bribes. He appointed corrupt individuals to various boards and commissions to shake down hospitals, racetracks, road builders, and government contractors. He is most remembered for trying to sell off Barack Obama’s U.S. Senate seat after Obama was elected president in 2008.

But it is not only governors who are corrupt. Corruption pervades every part of the state—not every town and government office, but too many. Among the convicted congressmen, perhaps the most colorful was the swaggering Dan Rostenkowski, Mayor Richard J. Daley’s man in Washington.

Among state officials, the most well-known was the “good old boy” Paul Powell. Secretary of State Powell grew up in Vienna, Illinois, in downstate Johnson County. He was first elected to the state legislature, where he rose through the ranks to be elected speaker by a downstate coalition of legislators. From there he ascended to the secretary of state position, where, like later Secretary of State George Ryan, he would use that post to enrich himself. Although Powell never earned more than thirty thousand dollars a year, his estate was worth $4.6 million, including racetrack stocks like those Governor Kerner took as bribes. The most memorable aspect was the eight hundred thousand dollars found in shoeboxes in his hotel room in Springfield.

To round out a more modern corruption montage, there is the strange tale of Rita Crundwell, the comptroller and treasurer of downstate Dixon, Illinois. Dixon is most famous as the home of former President Ronald Reagan. Crundwell’s story illustrates that corruption is not necessarily limited to high state officials or denizens of big-city Chicago. She managed to steal an amazing fifty-three million dollars to fund a very high lifestyle over a number of years. She persisted even in recession years, when the town had to make severe cutbacks in public services. She accomplished this by the simple expedient of opening a fake checking account and transferring city funds to that account. For her crimes, she received a twenty-year prison sentence, and her horses and jewelry were auctioned off to reimburse part of the stolen funds. The media, particularly television, prominently displayed pictures of her swimming pool, home, horses, and jewelry, which average citizens in Dixon could not afford.

Corrupt politics in Illinois have always been colorful. At the beginning of the twentieth century, Chicago aldermen were paid a stipend of less than two hundred dollars a year. Yet the Chicago Record, a newspaper of the time, revealed: “In a fruitful year the average crooked alderman has made $15,000 to $20,000”—big money in those years.

Most Chicago aldermen were on the take. In the famous “Council of the Gray Wolves,” which lasted from 1871 to 1931, the journalist and crusader William Stead wrote that no more than ten of the seventy aldermen in the council “have not sold their votes or received any consideration for voting away the patrimony of the people.” As the leading Democratic paper, the Chicago Herald, put it, aldermen in “nine cases out of ten [are] a bummer and a disreputable who can be bought and sold as hogs are bought and sold at the stockyards.”

Things were no better in the state legislature. In the second decade of the twentieth century, forty state lawmakers accepted bribes to elect William J. Lorimer to the U.S. Senate. He was later thrown out of the Senate. The scandal contributed to the passage of a U.S. constitutional amendment in 1912 establishing the direct election of senators by the people rather than by the state legislatures. In the following century, Illinois residents seemed resigned to government corruption.

Times may be changing, however. Since Governor Rod Blagojevich’s indictment and conviction, a groundswell of public support for ending corruption has developed. A 2009 Joyce Foundation public-opinion poll showed that more than 60 percent of Illinois residents list corruption as one of their top concerns, even higher than the economy or jobs. More than 70 percent of Illinoisans favor a number of specific reforms. Yet such reforms get enacted only after long, drawn-out battles, if at all, because of the pervasive culture of corruption.

From Corrupt Illinois: Patronage, Cronyism, and Criminality. Copyright 2015 by Thomas J. Gradel and Dick Simpson. Used with permission of the University of Illinois Press.

The authors will discuss their new book at a Society of Midland Authors program Tuesday, Feb. 10, at 7:00 pm. The program is free and open to the public. No advance registration is required.