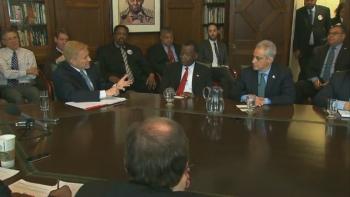 The candidates for mayor zeroed in on the incumbent, Mayor Rahm Emanuel, in their first head-to-head forum of the campaign. The five candidates on the ballot appeared before the Chicago Tribune editorial board where they disagreed on issues like crime, education, and the use of millions of dollars of special TIF funds.

Mayor Emanuel may be polling ahead and dramatically outraising the rest of the field, but he did not take his opponents lightly today. He went after his top two challengers, Chuy García and Bob Fioretti, on their records.

The candidates, including Fioretti, García, Willie Wilson and Dock Walls, disagreed on numerous issues like putting more cops on the streets. They all agreed to abolish the red light camera program, except the mayor who simply said he wanted to reform it. They also differed on how to raise revenue for the cash-strapped city – and focused on the TIF program – special funds of $1.7 billion that go to various city projects. García likened the embattled program to a “slush fund.”

“The TIF program has siphoned off dollars from schools, park districts, other taxing bodies that need it,” he said. “It’s become a source of patronage and pay to play in Chicago.”

But the mayor defended the program, and his efforts to increase transparency regarding how the money’s spent.

The mayor then turned the tables on frequent TIF critic Fioretti for supporting a $15 million payout to the Chicago Mercantile Exchange after they threatened to relocate.

Wilson and Walls also took exception to the TIF program.

“TIF dollars aren’t the answers to our problem,” said Wilson. “Economic empowerment and development is the situation. We have to find ways of bringing in new businesses, new opportunities.”

“Rahm Emanuel’s Chicago has neglected African-American communities and the TIF funds that have been used have been hoarded downtown, and we have to stop that,” said Walls. 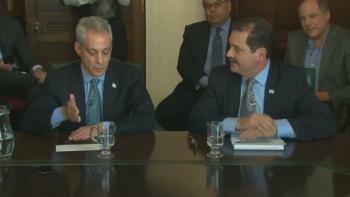 The debate before the Tribune editorial board was fairly subdued, but did contain a few other tense moments. García slammed the mayor for raising taxes, fees and fines, like parking tickets, equating it to raising hundreds of millions in property taxes, to which the mayor brought up a vote García made when he was on City Council in the Harold Washington era.

“You increased the property taxes to the largest amount ever with your vote,” said Emanuel to García.

“Here we go,” García shot back. “Taking a vote from 30 years ago when we ended Council Wars, when we beat the Vrdolyak 29, when we carried a deficit of $80 million from Jane Byrne -- we were going to lay off 11,000 city employees, including 5,000 policemen. I did the right thing.”

“The largest property tax in the history of the city,” the mayor repeated.

“Pales in comparison to the $700 million that you’ve increased over the past four years,” García responded.

This was the first of five joint appearances the candidates will make before the Feb. 24 election. Next Wednesday, Feb. 4, they will be here at Chicago Tonight.

View the interactive graphic to learn more about the mayoral candidates.