It's a citywide festival with participation from Chicago Shakespeare Theater, The Field Museum, Manual Cinema, and many other Chicago institutions. Spanning 10 days, the Chicago International Puppet Theater Festival will feature public performances across the city by artists from abroad and across the nation. It began Wednesday and continues through Jan. 25. Blair Thomas joins us to tell us why he founded Chicago's first International Puppet Theater Festival. 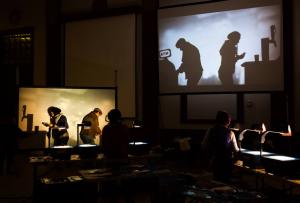 Can you tell us a bit about your organization, Manual Cinema?

We describe ourselves as contemporary shadow puppetry—a cinematic, theatrical experience. We started in Chicago a little over four years ago. We all come from different theater backgrounds, and none of us had been really trained in film. But we found the combination with shadow puppetry really exciting, so we ended up developing this aesthetic.

And how did you get involved with the Chicago International Puppet Theater Festival?

One of the co-artistic directors, Sarah Fornace, had worked a few shows with [festival founder] Blair Thomas as puppeteers for a company in the past few years. And he had always been really supportive of our company and wanted us to perform something new. So we wanted to create a feature-length show when he approached us about premiering our work. 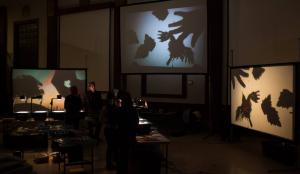 Each show we make has been built upon a foundation, and then we add new technology or concepts. Mementos Mori is the largest show we’ve made to date, in both scale and content.

In the past, we’ve focused on a single protagonist. This time we played with narrative structure, following several characters and used an interweaving story. It’s the first time we’ve experimented with new staging. There are more screens and it’s more technical than what we’ve made in the past.

It’s pretty amazing. I came to Chicago with a theater background, never having touched a puppet before. I met Sarah [Fornace] working on a Redmoon Theater show. I was so amazed at how many different types of people are out there making puppet shows. It’s a really vibrant community. And the scale is growing—people are incorporating puppets in theater and commercials.

It’s not like Jim Henson’s Muppets, which a lot people associate puppetry with. It’s now like War Horse or The Lion King [on Broadway]. People now have more experiences to draw from. It’s not just a puppet on a stick anymore.

I had no idea it was so big here. There are a lot of young people making stuff—people with no performance background, but one in visual arts. I think it just lends itself to that. Because it’s object-based, and you just make it up from anything. I’ve seen a lot of people just using an apple or a stack of rocks. There’s a lot of room in the medium. 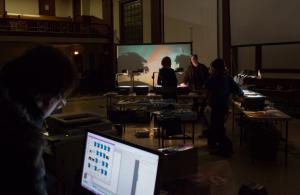 What can the Chicago International Puppet Theater Festival viewers expect to see from Manual Cinema?

Our new show is called Mementos Mori, and it’s about death and technology. We explore the relationship with death through three characters at different stages in their lives.

Each has a different relationship with death, and we combine puppetry and live action. There are actors and silhouettes and puppets of all sizes. And the show has over 500 puppets.

How does this production differ from your other productions?

In our previous work, we had created these shows for a single screen, where we’re behind it and the audience is in front. And they wouldn’t see us at all. So all our shows had been made with us meant to be behind the screen.

But when we flipped it around, it became a spectacle and became theatrical because you can see the puppeteers making the images. That’s really exciting. When we made this show, it was the first time going into it that we knew we were going to stage the show that way. So we were able to layer on a lot more imagery because adding screens and projectors is like adding cameras—we’re able to add more shots and able to move quickly. 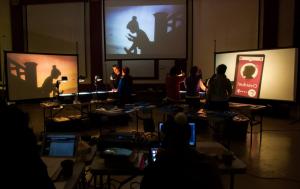 Anything else you think we should touch on?

We’re all so excited for the festival. There’s a lot of awesome programming happening, which is exciting. Chicago is becoming a center for puppetry.