Geoffrey Baer puts Chicago ZIP codes in order, traces the beginnings of the Teamsters union, and tells the story of the show behind a heart of silver in this week's edition of Ask Geoffrey. 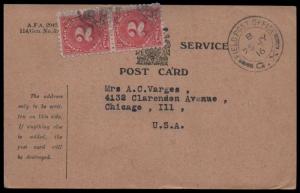 Before these rudimentary zone numbers were established, sorting mail in Chicago was really an art! The city had postal districts, identified by names like “Ravenswood Station” and sorters had to memorize which addresses were in which districts. As quickly as possible, sorters would read the address on an envelope like this one (to the right) on north Clarendon. They were expected to know that this address was in the Ravenswood Station district and would literally throw the piece of mail into the Ravenswood Station bin. The sorting process was called “throwing a scheme” and it took a lot of practice to get good at it – by some accounts as long as three years.

But, as Chicago grew and mail volume increased, it became impossible to find and train enough qualified sorters. So, in 1920, the Chicago superintendent of general delivery numbered the city’s existing 48 postal districts and asked people to begin adding the postal station numbers to their mail. So, now a letter going to a Ravenswood address would be addressed as “Chicago 25, Illinois” because that neighborhood was the 25th zone (which today is 60625).

The system worked well enough that in 1943, it was rolled out in the 178 largest cities across the country during WWII, when experienced sorters were even more difficult to find. Finally, the U.S. Postal Service expanded the zone system and implemented it nationwide, creating the ZIP, or Zoning Improvement Plan, to number every zone in America. They even created a cartoon mascot, Mr. ZIP, to encourage people to use the new codes on their mail. The ZIP code system was further refined in the ‘80s with the ZIP+4 system we use today.

If you really feel like going postal, check out this zippy postal service PSA from 1963!

I know the Teamsters union started in Chicago but when did the Teamsters start and where did they meet? Also, why and how did they choose the name Teamsters? -- James Cuci, Orland Park

The International Brotherhood of Teamsters is a labor union with more than 2 million members, about half of whom are in trucking or warehousing. The rest are in a wide range of trades and professions, from policemen to printers, secretaries to sanitation workers. Its original name was the Teamsters National Union, which did in fact officially form in Chicago in 1902.

The term "teamster" refers to the occupation of the union’s earliest members – men who drove wagons pulled by teams of animals, like oxen, horses, or mules. Team drivers later of course became our modern-day truck drivers.

In the days of horse-driven trucking, being a teamster was a lousy job. The drivers worked long hours for low wages, and even worse, they were held personally liable for bad accounts and lost merchandise. The American Federation of Labor stepped in and organized local unions of teamsters across the country, including in Chicago, in 1887. In 1901, some of these local unions banded together to form the Team Drivers International Union based in Detroit. The ranks quickly swelled to 30,000 members.

But a group of 47 Chicago local unions broke off, claiming that many officers of the TDIU were in fact not workers, but employers who owned multiple teams of horses and that this kind of collusion with management violated the union’s own constitution. The Chicago group reorganized in 1902 as the Teamsters National Union, which is why we can say the Teamsters union was founded here – but, the American Federation of Labor President Samuel Gompers rejected the teamsters’ application to join the AFL and urged the fledgling union to merge with the TDIU. The two organizations resolved their differences and merged in 1903 to become the International Brotherhood of Teamsters headquartered in Indianapolis.

Within a few years, two-thirds of the union’s 45,000 members were in Chicago. Twenty-five Chicago locals built a headquarters building at the corner of Jackson and what is now Ashland Avenue in 1911. Over the years, it was expanded into a campus famously called Teamster City. The group known as Joint Council 25 came to represent all Chicago locals. Today, Joint Council 25 is headquartered in Park Ridge and represents 125,000 workers and 28 local affiliates. 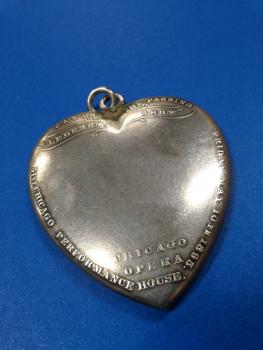 Take a look at the pendant in question at the right – thanks to our viewer Pam for letting us borrow it! The pendant was a memento of a popular variety show that first ran in Chicago in 1895 called The Passing Show. On May 10, 1895, all the women in the audience of The Passing Show received one of these heart pendants.

The Passing Show was a review that ran at the Chicago Opera House, at the corner of Washington and Clark, diagonally across the street from what today is Daley Plaza. The show spoofed current events as well as the major plays and operas from the previous year – something like an early Saturday Night Live. The name “Passing Show” referred to the passing, or previous, theater season that was being lampooned.

The show was first staged at New York’s Casino Theatre in 1894. It was dreamed up by a couple of New York theater producers as a solution to a problem: the financial panic of the previous year had left many actors and theater managers out of work. So, the producers Canary and Lederer leased the Casino Theatre on the cheap and developed a quickly-written, vaudeville-style “topical extravaganza” as a way to lure audiences back into the theaters and employ lots of out-of-work actors. It was quite a spectacle, with a cast of over 100 people.

In 1895, a year after its New York debut, the show traveled across the country, including a stop in Chicago. The show returned to Chicago and other cities in 1896. And an interesting note about the first production in 1894: a troupe of African-American dancers from that very show were filmed by none other than Thomas Edison. The troupe was known as the Pickaninnies – and while we certainly would regard that as an incredibly offensive name these days, it is a remarkable piece of footage, especially when you consider that they were likely the first African-American people on film in history.

Almost 20 years later in 1912, a new Passing Show was staged in New York by the Shuberts. Each year, until 1925, the show was revised and updated to cover the shows and events of the previous year. The lyricist and composer for the new staging of The Passing Show was a Lake Forest man named Harold Atteridge, whose routine for writing new numbers sounds a lot like what you might hear from a Saturday Night Live staff writer today:

“I do most of my writing between the hours of midnight and 5 AM. I write in long hand under an electric desk lamp, and always alone. Most of the comedy dialogue that I write…I observe in everyday life – on the subway, in restaurants, on the street, in hotel lobbies, at church, in barber shops, in business offices, and most any place where ordinary people are to be seen. During the day I watch persons and at night I write about them…I read all the newspapers every day and this affords me a field of current information. The…annual 'Passing Show' is a resume of theatrical, business, and political topics of the past season set to song, dance and laughter."

Back to the heart: it’s not only a charming pendant, it’s also a clever marketing ploy. It’s called a Trilby heart after the heroine in the 1894 George du Maurier novel Trilby. Trilby heart lockets and brooches became a major fad of the day. Giving away the hearts at The Passing Show was likely a ploy to sell tickets to well-read women who otherwise would not attend a light, topical review of this kind. The novel’s heroine was a young girl named Trilby O’Farrell, and all the men in the story were hoping to win her heart.