"David Bowie Is" is gone. But if you weren’t among the 193,000 that walked through the doors of the Museum of Contemporary Art Chicago to see the exhibition during its 15-week run, do not despair: The show will be up in Paris in March, and if you miss it there, there’s still Melbourne, Australia starting in July. Failing that, you’ll have to hit the Groninger Museum in the Netherlands between December and March 2016, at which point "David Bowie Is" will truly be no more.

The MCA, which purportedly spent $2 million to mount the exhibition, made that money back in its gala opening, and the rest is just record-breaking gravy for the 47-year-old institution.

The exhibition, which included 400 objects, video and film clips from the David Bowie Archives, covered Bowie’s creative life from boyhood to the current day, including iconic costumes (Ziggy Stardust and Alexander McQueen’s Union Jack Suit), lyric sheets, evocative rooms meant to conjure up the spirit of a particular period (the Berlin room), and eye-raising stray objects, like house keys, a telegram from Elvis, and a coke spoon.

Museum officials boast record-breaking Twitter hashtags, and great gobs of cash gathered at the Bowie store just outside the exhibition, which took up the entire fourth floor.

The Sennheiser technology used in the exhibit is described as enabling “visitors to have a unique, multi-faceted journey of David Bowie’s sound and style.”

Read an interview with Robert Genereux, business director at Sennheiser and project manager for the David Bowie exhibit. 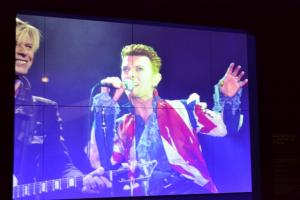 Q: How does the technology work?

We’re using two different technologies. Depending where you are [in the exhibit], there are different things that happen. The first part is through headphones. As you walk in the exhibition, every time you pass a video or AV screen, you will hear the corresponding soundtrack in your headphones. Where you are depends on what you hear. There are screens with interviews of people, so you hear the interview. If you move away, the interview will fade out and you’ll pick up the next zone.

The very last room [in the exhibit] is called the show moment. You remove the headphones and experience the loud speakers the company created and used an algorithm that takes the stereo track in the ‘70s into a 9.1 loud speaker system. It immerses visitors. There are video projections on three of the walls and from the ceiling; it’s very impressive.

Q: How does the trigger aspect of the technology work?

It’s not related to the headphone itself. Each visitor has a small handset; it’s not a location device. GPS doesn’t work indoors, so we couldn’t do it that way. We use our own technology. If you want to have a figurative image in mind, we create spaces—think of a bubble or a sphere. In a big room, we’ll have five bubbles or spheres, and as you move from one bubble to the next, the audio from the previous bubble fades out and the audio from the next bubble comes in. It’s all related to where you are in the museum. It’s unlike any other museum I’ve seen. With this audio, there is no commentary. No one is talking about the piece of art or the costume. It’s really all linked to the video you’re watching, and for the bulk of it really, it’s the music of David Bowie. 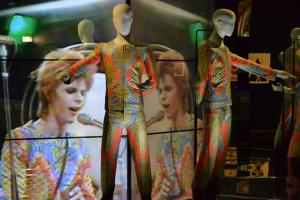 Q: How long did it take to set up the audio portion so it matched with floor plan of the exhibit?

The first part is planning. Because the exhibit travels, I travel with the exhibition in every city. And in every city, the exhibit is redesigned because of the different layout, shape, and heights of the museum. We have to redesign the [audio] tours. Then we figure out the installation; it takes about three weeks to make this happen. The planning is done before I come here. The planning may take an additional few weeks on my part. With the help of the exhibition designer or architect, we integrate into their design. It takes three weeks of actually installing the equipment. A big part of that is programming because every site is different, so the behavior of the system is slightly different. But the end result for the visitor is the same. We want to make it a seamless experience. And all of this technology is being presented for the first time in an art museum.

Q: What were some of the obstacles you faced when installing the audio for the exhibit?

The number one challenge is time. I only have so many weeks available to set it up. On Sept. 3, we started setting up the technology parts and on Sept. 8 the objects from the exhibit arrived, and we had to be ready Sept. 18.

Q: Most shows are about the artwork on display, but from what I’ve heard this one is really about the about the audio portion as well. How does this technology shape a visitor’s experience of the exhibit?

It’s all about music. If you had no headphones and say a loud speaker, it would be very chaotic for everybody. What you see and notice is the gallery is completely silent. What you hear [on the headphones] is always in context. If we didn’t have a system like this, it would be loud, extremely noisy and chaotic. The experience would not be the same.

View a slideshow of the exhibit. 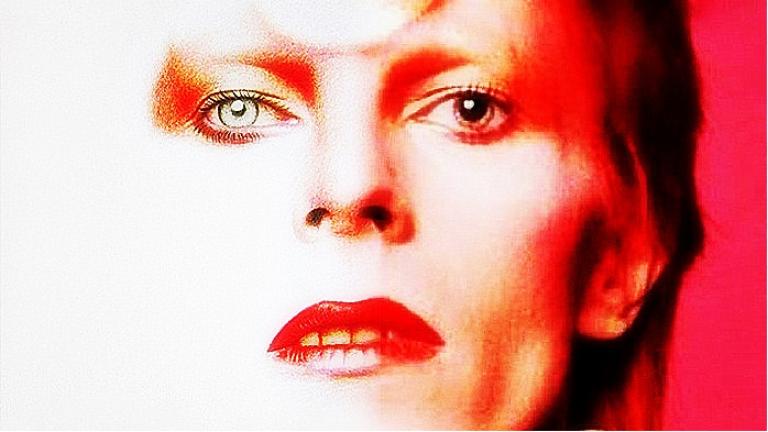 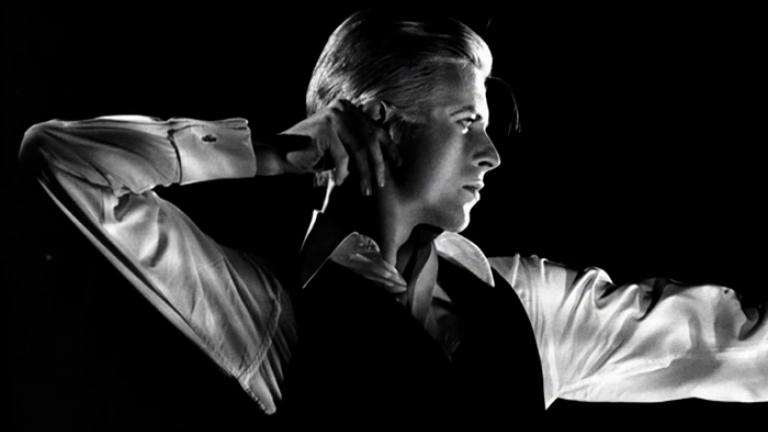 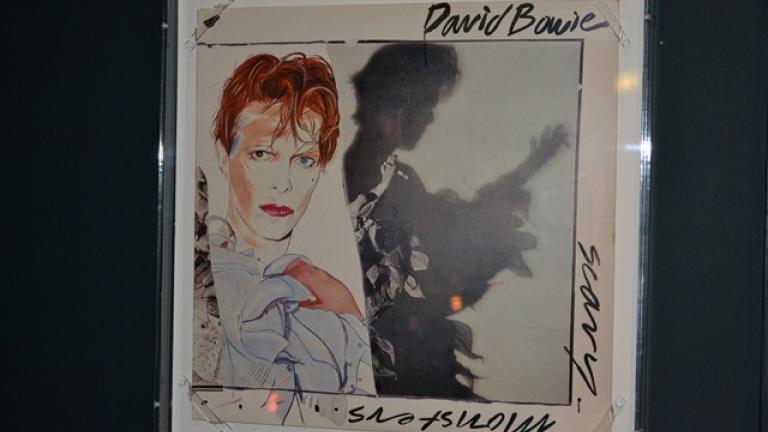