Chicago poet and fiction writer Stuart Dybek stops by to talk about teaching writing at Northwestern University and his two books of short stories released this year.

Read an excerpt from "Ecstatic Cahoots." 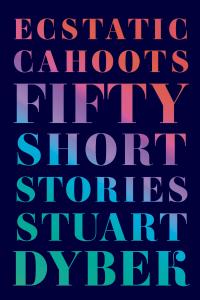 The Start of Something

Subway grates, steaming tamale carts, charcoal braziers roasting chestnuts, the breaths of the pedestrians outpacing stalled traffic, the chimneys Gil can’t see from the window of the airline bus— all plume in the frigid air. It’s cold enough for Gil to wear, for the first and only time, the salt-and-pepper woolen trousers he bought at an estate sale last summer. He’d stopped on a whim when he saw the sale sign, an excuse to tour a mansion that looked as if it once could have belonged to The Great Gatsby’s Tom Buchanan before he’d moved from Chicago’s North Shore to Long Island “in a fashion,” Fitzgerald wrote, “that rather took your breath away . . . he’d brought down a string of polo ponies from Lake Forest.” Perhaps the deceased had left only debts, for the heirs, haughty with grief, were selling off the furnishings. Those there to buy spoke in subdued voices as if to seem less like scavengers. Gil browsed the sunlit rooms with no intention of buying anything, then in an upstairs bedroom he found an open cedar wardrobe filled with old, handsomely made men’s clothes. He selected the trousers and held them up before a walnut-framed full-length mirror, and told himself he might wear them for cross-country skiing even though he hadn’t skied in years. Later, when he tried them on at home, they fit as though they’d been made for him, causing Gil to wonder who the man who’d worn them had been. In one of the pockets there was an Italian coin dated 1921, and Gil thought it might be worth something to a collector. He kept it in a cuff- link box with spare buttons, a St. Christopher medal, a class ring, and cuff links he never wore. Even after he’d had the trousers dry-cleaned they smelled faintly of cedar.

The airline bus has nearly reached downtown when the woman in the seat across the aisle leans toward Gil and asks, “Are those lined?” 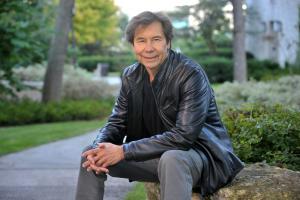 “Are those lined? They’re beautiful but they look itchy.” Wings of dark glossy hair and a darker fur collar frame her narrow face. Her smile appears too broad for her, but attractive all the same.

“Not quite. Actually, they are a little itchy, but they’re warm.”

“They look right out of the Jazz Age. They’ve got that drape. I love anything from the twenties— music, furniture, the writers.”

“Some of my favorite writers, all right,” Gil says.

“They still read so alive! Like that newly liberated, modern world was just yesterday.”

It sounds like she’s speaking in quotes and Gil smiles as if to agree. Her hairstyle and the coat she’s bundled in both suggest another time. The coat has a certain Goodwill-rack look that exempts a woman from the stigma of wearing fur. Gil has no idea what kind of fur it is. It matches the luster of her hair. He has the vague feeling they’ve met before, which makes talking to her effortless, but Gil doesn’t say so for fear it would sound like a line. She’d know a man would remember meeting someone who looked like her.

Read more of “The Start of Something.”

Excerpted from ECSTATIC CAHOOTS by Stuart Dybek, published in 2014 by Farrar, Straus and Giroux, LLC. Copyright © 2014 by Stuart Dybek. All rights reserved.