Chicago Advances in the Race for the Presidential Library

Yesterday, two Chicago universities were named finalists in the race of being home to the Barack Obama Presidential Library. Both the University of Chicago and the University of Illinois at Chicago are two of four finalists who have been asked to complete the request for proposal by the Barack Obama Foundation. The institutions have until December 11 to provide details for their projects; which must include ideas on how the library will promote “smart and sustainable economic growth” and contribute to the community it’s connected to. On Chicago Tonight, our panel of experts talk about the details of the proposal and Chicago’s chances of winning the bid. Read more about the two local bids below. 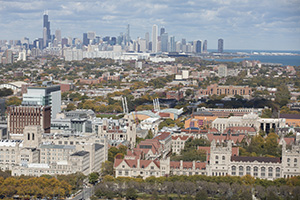 Monday's announcement by the Barack Obama Foundation gave hope to the University of Chicago that a successful South Side bid could assure more interest in the area. The university expressed enthusiasm in collaborating with community partners to bring awareness to the culture and businesses the neighborhood has to offer.

“Today’s news affirms our strong belief that the library could be transformative for the heart of the South Side, bringing new economic and cultural opportunities to all of Chicago,” University of Chicago President Robert J. Zimmer said in a statement.

President Barack Obama and Michelle Obama both have close ties to the university and its campus. Barack was on the Law School faculty for 12 years while Michelle served as Associate Dean of Students Services at the university and ended her tenure as Vice President of Community and External Affairs for the University of Chicago Hopsitals. While their history might influence the foundation's decision on the winning bid, it will not sway the school's plan for the location of an Obama Library. The university chose to remain silent on details surrounding the library's potential location but stated it would be placed in one of its neighboring communties in order to bring more attention to the South's Side's local businesses. Although, the school does forsee an academic relationship with the library.

Watch the University of Chicago's video advocating for the library.

University of Illinois at Chicago

Monday's announcement also nudged UIC is a step closer to potentially securing a winning bid. Although the odds may not be in the university's favor considering the lack of connection President Obama has to the campus, UIC Chancellor Paula Allen-Meares expressed optimism.

“As Chicago’s only public research university and one of the most diverse campuses in the nation, UIC is the ideal institution to host the Obama Presidential Library and Museum, and we are honored to be selected to participate in the next phase of this process,” Allen-Meares said.

Although they might be the underdogs in this race, the university looks to exhaust all its resources. The university partnered with the Northlawndale community to raise awareness for support and earlier in the summer a group of UIC students went to Washington, D.C. to lobby for the university's bid. After their trip, the student group started the social media campaign "#UICisObama" to vocalize their enthusiasm to the campus.

While the University of Chicago hasn't revealed details on the library's location, UIC has proposed three potential sites. The locations include a plot in the Illinois Medical District, the North Lawndale neighborhood and Harrison Field.

View a map of the location below.