We meet Loyola University chef and “Hell's Kitchen” winner Scott Commings, who will be leaving for Las Vegas to work in Gordon Ramsay's restaurant. We'll ask him what it's like to cook in such a high-pressure environment and whether Gordon Ramsay really is as intimidating as he seems.

While Commings is the first Chicago area winner of the show, there’s been more than a baker’s dozen of Chicago area competitors on “Hell’s Kitchen.”

In addition to Commings, Chicagoan Richard Mancini and Lake Zurich native Jason Zepaltas competed in Season 12. Zepaltas was also a competitor in Season 9 but was forced to withdraw from the competition in Season 9 due to dehydration. 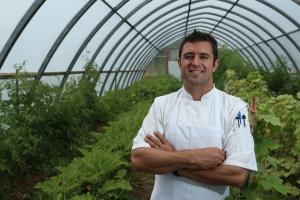 Q: How long has Scott Commings worked at Loyola?

He’s been at Loyola for four years. He was the second employee I hired when Loyola bought the Retreat and Ecology Campus in Woodstock in 2010. He was the first executive chef the university directly hired.

Q: Why did you hire him?

Well, it was kind of a unique opportunity for Loyola. Most of Loyola’s food services are outsourced. We hire a third party to run the food operations. [The Rev. Michael] Garanzini was very direct in his expectations when we bought this place. He wanted students, faculty, and staff to come out and have a very different experience than what they were getting on campus. He said to hire [our] own chef who will do everything from scratch. He said, ‘I want people to walk in and smell bread baking in the ovens when they come out here, and give people a sense of place and home when they came out here.’ His challenge to me was to find the best chef we could find to bring out here.

When I got here—I’m not familiar with the Woodstock community—one person I hired early on was Patricia Carty, who was the GM for the facility in Woodstock at that time. I asked her who was local; she lived in the community for a long time, and she gave me the names of a couple people who she felt had strong reputations here. And I brought them in and went through the interview process. Upon meeting Scott, his energy, commitment and his approach to operations in the kitchen and everything he could bring, I had no question in my mind we found the right person. 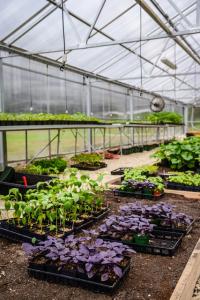 Q: What was Scott’s role at the Retreat and Ecology Campus?

In 2010, he came in as executive chef. He was primarily responsible for all meal services for the facility. As we have grown here and the scope of what we do here has expanded, he has grown right along with that. Now he oversees the farm operation on the grounds. He’s responsible for directing the farm manager and how everything gets planted and how it serves his kitchen and the needs of the kitchen. He’s in charge of all the culinary and dining aspects on campus, including catering done for groups that come to the facility.

This past March we completed a demonstration kitchen, and he began then to roll out a series of classes to teach people who are here for retreats and programs how to pick [food] from the garden, bring it in, and how to cook it. He’s done a whole series of classes—bread baking, how to properly use a knife, different classes on how to cook pasta from scratch, wine tasting, tours of Italy—a whole assortment of classes and programs are in place on the campus. He’s been very successful with farm to table dinners. When we put them online, it sells out in record speed; they sell out instantly.

Q: How many people would estimate visit the campus each year?

We bring 18,000 people a year through the property. That includes day groups that meet for a day, groups that stay overnight and [others] that come for different meetings. All of those groups come together in the dining room, and most every group that comes through here has some sort of food component whether it’s a banquet or a sit-down catered event. He’s responsible for executing all of that for us. Also, he’s part of the management team for the property. He oversees the kitchen operations, and he meets every week to discuss how things are going across the board.

Q: What did you think when you found out he was going to be on “Hell’s Kitchen?”

We were very supportive of him going for this. We recognized quickly that this is a once in a lifetime opportunity, and Loyola was behind him 100 percent. We worked it out so he could take a leave of absence during the time the show was filming. We all sat back and enjoyed watching it with him and his family. Knowing Scott, his approach and his demeanor, we couldn’t be happier for him. We’re thrilled to be part of this experience with him. It’s interesting how we had to recruit for him in the first place. Now people are reaching out to us to be his replacement which is really great for us and his success and what he’s done really helped us as a university as a whole.

I couldn’t be happier for him. He still here every day; he’s still working his tail off to get things done. That’s the way he’s always been as part of the team and he’s seeing it through until the very end. I can’t say enough about how professional he’s been and how thoughtful and mindful he’s been of everything here. He’s making sure everything stays in place and continues to move forward. This couldn’t have happened to a nicer guy.

Cydney Hargis contributed to this report.